If the Diavel was a man, he would be the kind of man who strangled bears on top of mountains.

Heavy-shouldered and mighty. Filled with portent and power.

That is the Diavel.

And it doesn’t do acceleration.

The Diavel surges towards the horizon like a superbly focused explosion – and that never gets old.

Suddenly that deep-dish seat makes sense. Without it, your clenching bum-meat would be clenching air.

The Diavel got me. And it got me good.

It had been one of those bikes I didn’t really think much about. I knew about it, of course. But did it ever consume my thoughts? No.

It’d been a while since I last rode one, and while they’ve always been breath-takingly powerful, I’ve never quite come to them for a bunch of reasons – all of which this new incarnation has addressed.

It’s more than 10kgs lighter. It’s 15mm shorter between the axles (now 1600mm), its rake is three degrees steeper, and its trail has been reduced 10mm. This has done wonders for the steering and agility – and yes, this great brutal lump of technical wizardry is remarkably agile. And unlike the sassy feet-forward XDiavel, this Diavel is driven by a chain rather than a belt. 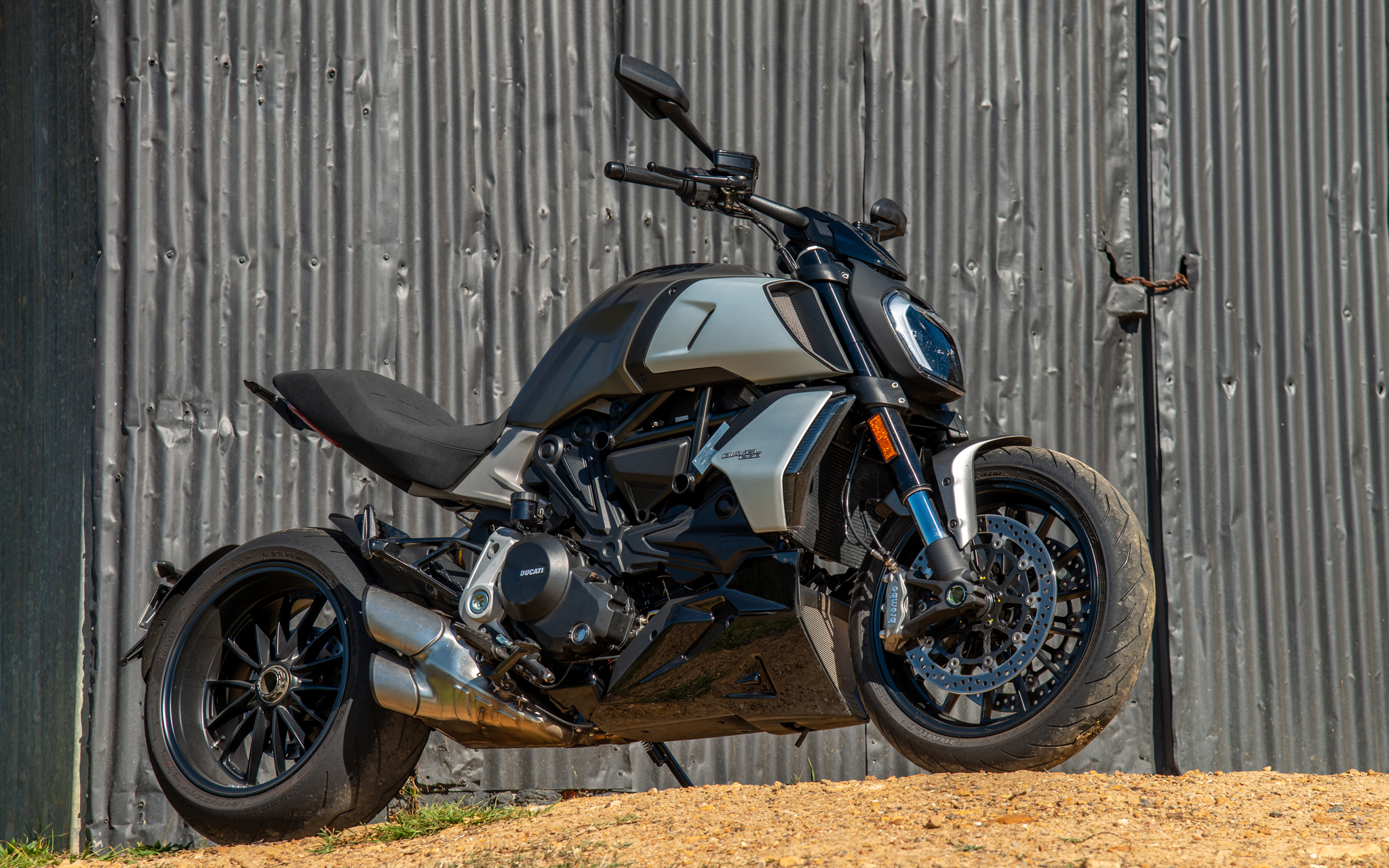 This is no cruiser – power or otherwise. There is no single “cruiser” parameter that applies to it.

Your feet are under you, and you’re hunched forward in that true “I mean business” way.

And you will mean business on the Diavel. You have to. There’s no point otherwise.

Somehow, and despite all its other great offerings, Ducati has managed to make the Diavel one of it’s most rewarding and delightful bikes.

Put aside any misgivings you might have about it.

This is a proper, hard-banging, gut-churning Hellzone of a motorcycle – and not some fat-tyred design exercise aimed at a market that prefers cruising to riding.

The Diavel is a weapons-grade real deal.

YEAH, BUT NO, BUT…THE LOOK…

People are polarised about its appearance.

It’s utterly unique and grimly brutal. Totally modern yet completely primal – which is quite a styling trick to pull off.

From some angles, it’s like a precision-cannibalised jet-fighter with wheels.

The brushed alloy scoops, the vast and monstrous all-black Testastretta DVT engine – around which everything is attached and to which all things must bow – the sculpted tank, the scalloped seat, and that Capo di tutti Capi (Boss of all Bosses) rear-tyre hooked around that deep-dished Enkei mag…

The Diavel really looks like it’s just told you to piss off and is waiting to see what you plan to do about it. And then it will strangle you like a bear on the side of a mountain. 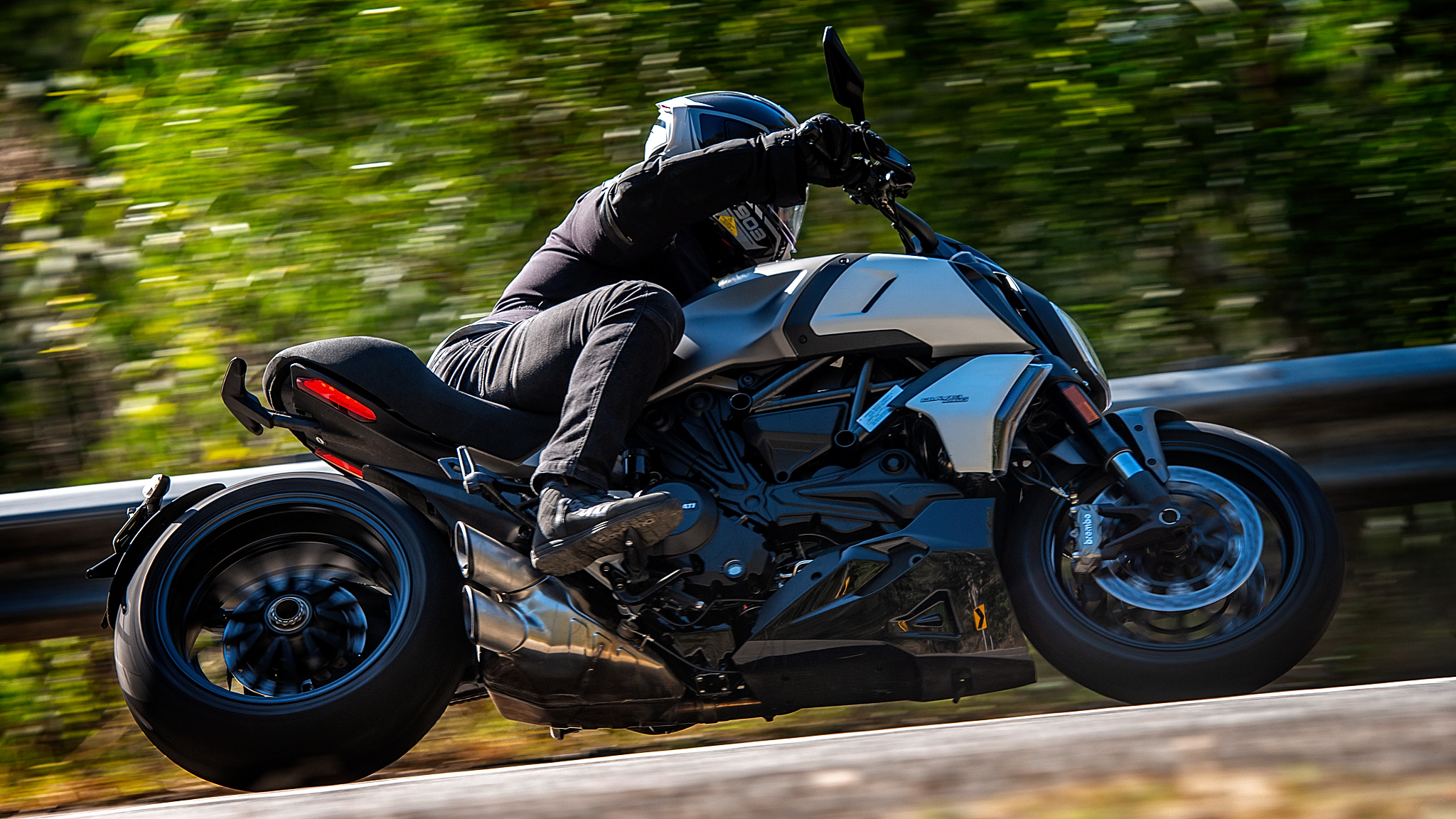 WHY DOES IT HANDLE SO DAMN WELL?

This is all about defiance. The Diavel is not a small bike. And it’s long – the front half is all monumental engine-darkness, and the back is all kicked-up hot-rod and fat rubber.

Despite this, it’s so easy to ride and manoeuvre; its balance and feel utterly bely its significant size. This is never more evident than when you chuck it hard into a corner.

Normally, pitching anything this big with that fat a rear-tyre into a bend is an exercise in teeth-and-bike-grinding alarm.

But Ducati is clever, and Ducati will not build a bike that does not handle really well. It’s in the rules.

All the Diavel’s weight (and most of it is in the engine) and thus its centre of gravity is very low.

Look where the front-cylinder of the L-shaped donk is sitting. Anything weighty sitting along the imaginary line running from the front axle to the rear axle, is being made less-weighty by being located there.

So when you’re levering it from side to side in corners, or toodling along at low speed, it feels almost effortless. Why? Because you’re not levering it. You’re just rolling it around that wheel-to-wheel axis.

No, it’s not a sportsbike, and it doesn’t handle or steer as fast as one. But you know what? It’s defiantly not all that far off. 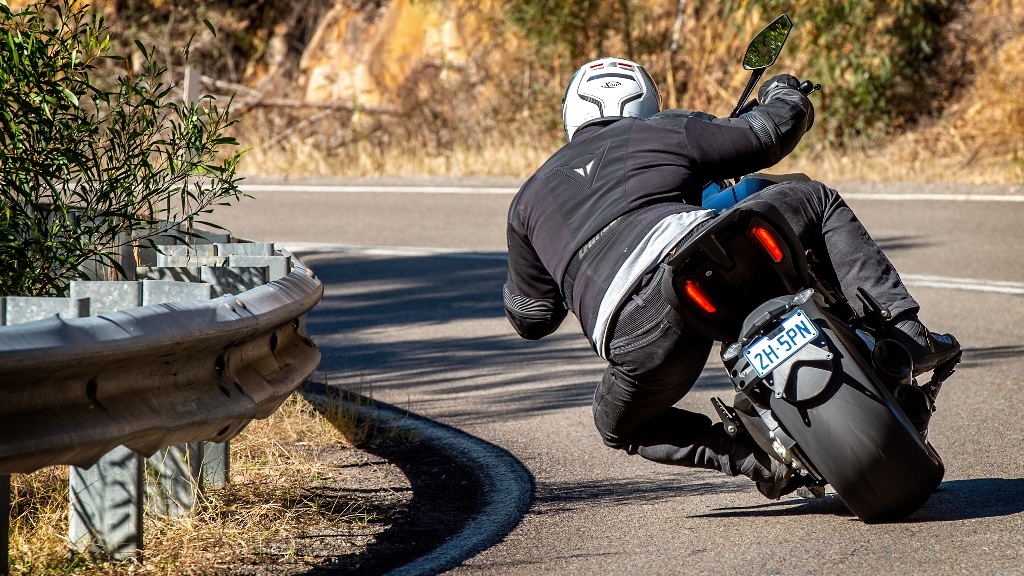 LET’S TALK NUMBERS FOR A SECOND

I was teasing VROD owners on Social Media the other day.

I said to them if they were serious about riding stonkingly powerful V-twins – and I know they like to think they are – then they might consider there’s more to genuine power than just making lots of noise. And maybe getting your fat-tyred Milwaukee train around a corner in good order would also be a needful thing.

Toys were thrown out of prams and I was called names. Tsk, tsk, tsk…you’d think men with tattoos on their necks would have more sense, huh?

I was forced to beat them shamelessly with numbers. Because numbers do not lie even as they hurt you.

What else ya wanna talk about?

“Yeah, well my Harley FXDR will eat it!”

Harley’s 1600cc FXDR allegedly makes 160Nm of torque, which is really nice. But it’s flat out finding 90 horses among that lot. And it weighs 303kg. It might be the best Harley Milwaukee’s ever built, but it’s just an obstacle for the Diavel to pass.

And right on cue came the Rocket III champions. The new one is not here, so we cannot argue about what no-one has yet ridden.

Now allow me to drive the final nail into those dream-filled coffins.

The Diavel will outhandle them all. Not by a little, either. By quite a lot.

Or did you imagine Ducati would produce a bike that didn’t go around corners?

The only bike to ever come near the Diavel in terms of performance and maybe handling was Yamaha’s defunct V-Max – but even it’s astonishing 173 horses and 153Nm was mitigated by its 315kg heft.

The Diavel is the King Daddy in this yard.

SO WHAT ISSUES DOES IT HAVE?

I struggled to find any. And I looked. And I rode, and I looked, and I rode some more. I took the Diavel up Thunderbolts Way to Walcha and back. It’s been up and down the Putty a few times and done the Wollombi loop when I’ve been in a bad mood.

I expected it to hunt at low speed and be kinda rough and gargly. Nope. Variable valve-timing and superb fuelling make the Diavel smoothness incarnate.

Overtaking anything is a giggle. It’s over before you’ve even noticed it’s begun. That engine doesn’t so much make useable power as creates it from the very bedrock of torque itself.

What niggled me was the seat. It’s lovely and comfortable, and made out of some classy suede-like stuff. That’s not the issue.

The issue was no wriggle-room. I certainly understand why there isn’t any. You got no business wriggling when you’re accelerating hard enough to trigger seismic shift.

So you really do need that bum-cupping thing going on under acceleration. And the Diavel is the most sit-in-it-not-on-it bike I’ve ever ridden.

But long stints – and I’m talking 800km days – had me wanting to move around on the seat and swearing to put more time in on the squat rack. Interestingly, you can easily ride it standing up for long stretches, and even sit yourself for a while on that wide pillion area of the seat. So I guess I am really nit-picking.

And I will extend that nit-picking to the headlight. It’s nice and wide on high-beam, but it could throw a bit further. I assume there are no kangaroos in Bologna, so I will forgive them that.

Oh, and the horn needs to sound like Satan yelling. It doesn’t. Damn shame – if you’ll pardon the pun.

And don’t go bellowing about the cost of servicing. The service interval is excellent. You only have to service the Diavel every 15,000km and do the valve-timing every 30,000km.

The Diavel comes with all the de rigeur electrical rider aids one expects on high-end blasters.

So three ride modes – Urban, Touring and Sports (the latter being a hilarious but serious attempt at escaping the Earth’s gravity) – are yours to enjoy.

I left it mainly in Touring, but with a tweak.

You can, of course adjust any of the pre-set ride-mode values (power, throttle response, ABS, cornering ABS, traction control and wheelie control), so you can dial up full power in Touring, but leave the ABS and traction control to assist with your bad habits. Or in the gentler Urban mode, you can turn everything up to 12, the safety nanny stuff off, and laugh like a lunatic for no reason other than it’s funny.

There is cruise control (thank you), and a three-level launch-control, the latter which entertained my neighbours no end. John even brought me a beer during the testing of this in front of my house. He saw I was a bit dry-mouthed.

Not so here. Easy as, via the left-hand switchblock rocker-switch thingy.

My caveman approved, just as he approved of the demonic red backlighting on the instrument clusters.

What else? Um, keyless fob ignition – and do stay close with the fob, or the Diavel will demand a PIN to start. 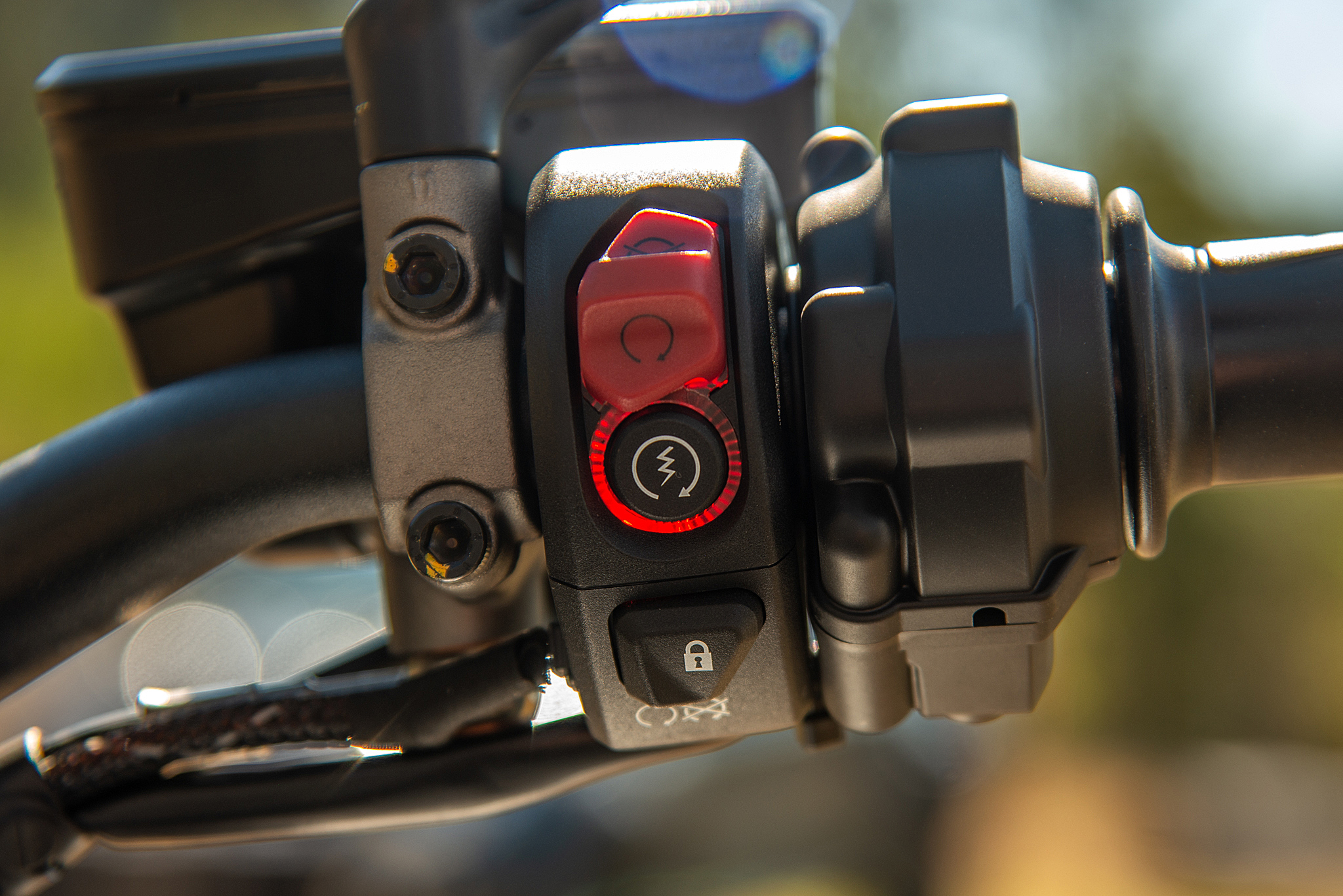 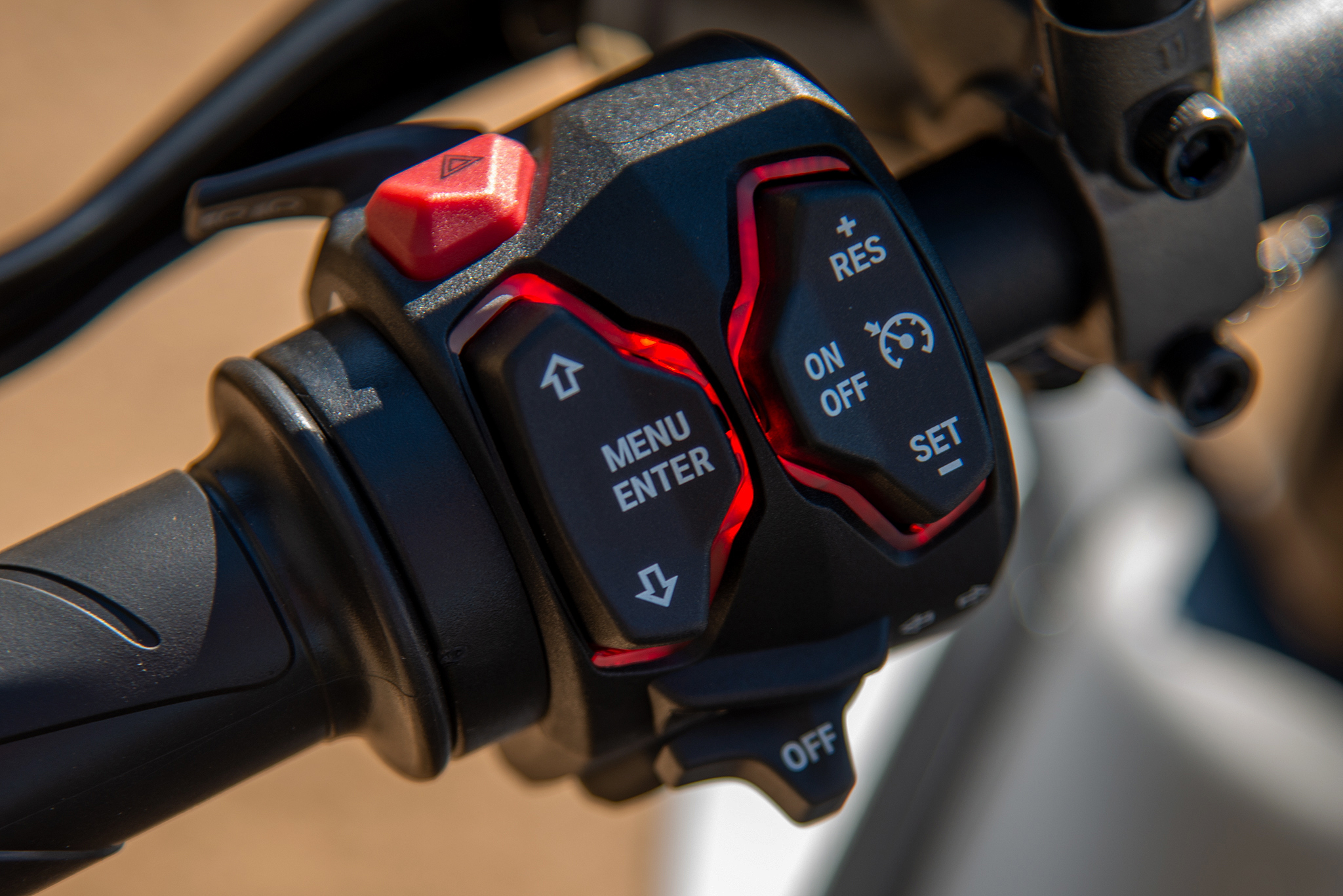 There is another iteration of it. The Diavel S, which comes with Öhlins and carbon. So that’s the one I’d get because I’m shallow and venal – and I would not care it costs some five grand more, and nor will you.

The Sachs shocks on this Diavel are excellent, as are the Brembo M4.32s – and I did haul on them hard enough to make that call – but a Diavel with Öhlins and Brembo M50s – and a Goddamn Hallelujah quickshifter! –  would take the whole bear-strangling match to another level.

The Diavel is a great bike. I didn’t expect it to be. But it was. I have rarely enjoyed riding a bike (and riding it hard) as much as I enjoyed the Diavel. The power and its delivery, coupled with the bike’s insane ability to handle while still managing to look like an angry steel war-totem, really resonated. I appreciated the Diavel on an emotional level because that’s where it got me.

It made me feel indomitable.

And that is truly Old Time Religion

COLOURS? It only comes in this war-jet grey, which Ducati calls Sandstone Grey. The Diavel S gets that killer red frame and come in Total, Utter and Complete Black, as well as the grey colour.

GO HERE FOR MORE INFO AND THE SPECIFICATIONS