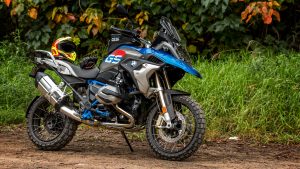 It’s far too easy to run out of superlatives in a review of the Rallye X, but we’ll see how I go.

This latest iteration of BMW’s legendary GS platform is, in my mind, the best GS ever built.

But I guess I have to explain that call.

I’m not a great dirt rider. I’m not even a very good one. This is despite having ridden more than my fair share of slate-cursed hills, knee-deep mud, wheel-kicking spoon-drains, and rock-strewn descents that felt more like inevitable gravity-fed catastrophes-in-waiting than controlled operations. 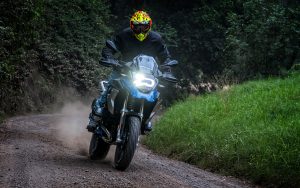 I have learned many things doing this.

The first is weight is a crucial factor in serious adventure riding. You spend a day picking up a 260kg bike loaded with another 60kg of gear on some wretched bull-dusted track in 40-degree heat and you’ll wish you took up nude moose wrestling instead.

The second is that same hateful weight can be eased by upskilling yourself so that you learn to dance with the big girl, rather than trying to wrestle her into submission.

And the third and most important thing is that BMW is aware of what its top-end adventure bikes weigh, and has filled those bikes with so many electronic rider-aids the weight is hugely mitigated. The result is that while you are always aware you’re on a large and powerful motorcycle, you’re not constantly swallowing your terror as you belt along unsealed roads.

Technically, this is an amazing achievement. 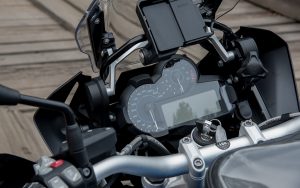 And as a result, the Rallye X is an amazing bike – even if you’re not an amazing dirt rider.

Of course, if you are an amazing dirt rider, then the rewards you’ll reap flinging the Rallye X off tabletops are vast. It’ll do pretty much all you want it to do, and then ask if perhaps Sir has something else he’d like to have a crack at, like maybe the Finke?

But if you’re like me, the Rallye X will still delight you, even if it is maybe quietly chuckling at you behind your sweating back.

So how is the Rallye X different to the other GSs?

Philosophically, it is BMWs thrust into the more serious meat of the adventure spectrum, a place where KTM has long been the Alpha predator. 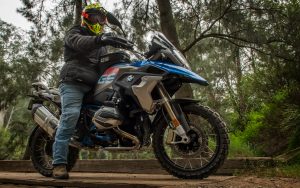 Interestingly, there is strong Aussie DNA in the Rallye X. A few years ago, off-road emperor, Geoff Ballard OAM, decided he would create his own R 1200 GS – and like much of what Mr Ballard does, his efforts attracted a great deal of attention in Bavaria. Attention was followed by application, and in the fullness of time, BMW Motorrad produced what it, thanks to Mr Ballard, felt was the ultimate big-bore adventure bike, the Rallye X. 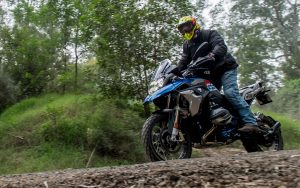 The X has the Adventure’s more robust sports chassis, and the base Rallye’s extra ground clearance, an extra 20mm of suspension travel, an 11mm shorter wheelbase, upgraded damping software, and 4.6mm less trail.

But the now higher (880mm) X is then fitted with a one-piece seat and a shorter screen – which points directly at its more dirt-focused purpose. Shorter screens are less likely to smash you in the teeth when you’re standing on the pegs and jumping canyons than the adjustable full screens fitted to the base Rallyes. I reckon the small screen looks better than the bigger one and I was not all fussed about a little extra wind kissing my perspiration away as I smash up and down the quickshifter.

But there is still more to the X. 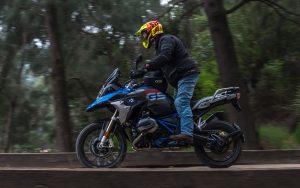 BMW’s Dynamic ESA (Electronic Suspension Adjustment) is standard, and gives you three preload settings, Minimum for just tooling around, Maximum for when the ruts and boulders have ‘Murder’ written on them, and Enduro…for, well, Enduro.

You are able to flick through all of them via a button on the left switchblock (where you can also adjust the integral ABS and traction control), or you can just leave it in Auto, which was my default option. I’m far too crap at dirt to try and second-guess the X’s Bavarian brain as I’m trying desperately not to ride into a tree.

Is it all electronically overwhelming?

I’m so the bloke to answer that question. 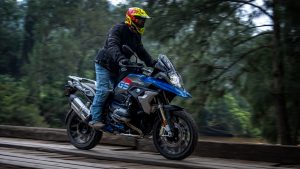 So many of today’s top-end bikes boast an electronics suite a MotoGP team would envy, but without a complimentary pit-crew to assist you.

I come from a time when you rode what you got given and a C-spanner was hauled out on rare occasions if you wanted to look like you knew what you were doing in front of your mates.

As a result, I tend to look a little askance at bikes which are smarter than me. So I end up picking what I imagine is a workable compromise in the often complex menus and riding that.

But if you make it easy for me to negotiate your menus, then I’m more likely to try them.

Navigating BMW’s electronics (throughout the model range) has always been quite easy even for a muppet like me, so I did fool around a bit with the X, which boasts the Dynamic Package and adds two more riding modes to the bike – Dynamic and Enduro. Dynamic gives you a sexier throttle response on the road, and Enduro has the same throttle characteristics as Rain mode, but will certainly kick up the dirt.

I fingerbanged that menu like a grinning fool, and was rewarded with all sorts of abilities I didn’t even know I had.

Like if you stick it into Enduro mode, the ABS stays on at both ends, and you can actually drift the back tyre a bit. Girls will think you actually know what you’re doing. Or turn the ABS off and really impress them.

Want more? Sure. Buy the plug. Lift up the seat and push it into the plug-hole you will find there. Encoding will commence and then you will have another two riding modes, Dynamic Pro and Enduro Pro. You are now free to customise your X’s performance. Like a pro. Different throttle response? Sure. Fiddle around with the traction control? No problem. Turn off the ABS on the rear, but leave the front on to save you? Go for it. 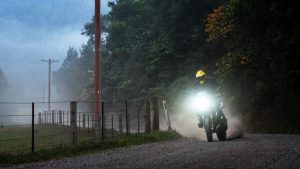 Do you really need the plug? Of course you do. It’s just like a lawyer. It is best to have one and not need him, rather than need him and not have him.

So top-notch electronics everywhere all the time. Yes, there’s Hill Assist, too. Saves you the embarrassment of rolling backwards into a ravine while you’re trying to co-ordinate clutch, throttle, brake and exhaustion to get yourself out of a tricky spot.

Couple these electronics with the now obviously immortal Boxer engine that produces 125 horses at 7750rpm and 125Nm at 6500, and boasts great engine braking from a motor so willing and tractable you’d think it was a well-trained sheep-dog, the X is truly a stunning package.

It’s actually quite empowering to ride. 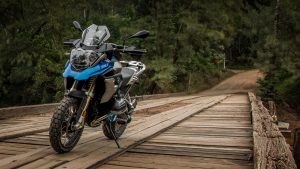 Like its more road-focused rellos, the X is staggeringly adept at carving corners despite its brilliant dirty tyres (Continental TKC80s, aka road-legal knobbies), eating vast miles and carrying huge loads. But when the bitumen ends, or you just have to see what’s up that little trail where the wild goats just went, the X comes into its own. Perfect stand-up ergos, proper Enduro pegs and great ground clearance make the X a very serious player in a serious and burgeoning market segment.

It’s smack up against KTM’s Super Adventure R. This was a fight BMW was not really able to engage in until the X came along. The Austrian competition was always a little harder-edged in the rough stuff and offered more grunt. 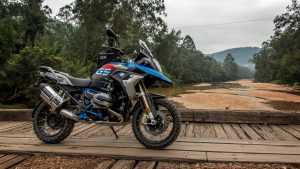 That’s now changed. The KTM remains more powerful and even more dirt-focused thanks to a 21-inch front wheel versus the Beemer’s 19-incher, but there’s a refinement to the X that is very appealing – especially in the way its electronic Telelever and Paralever suspension behaves, and that’s important if your dirt skills are not at Dakar levels. I also struggle to think of a situation on the dirt where I would find the Beemer lacking in grunt. There is no such scenario in my riding world.

Can I find fault with the Rallye X?

Sure, I can bitch about things like it being very tall, but then I would sound like an idiot. It’s just as tall as it needs to be. I can whine about how it’s heavy in a Motocross scenario, but then that would only be true because I am crashing it. Don’t crash it and you won’t have to pick it up. Suddenly, its weight is irrelevant, because it dances quite beautifully when the surface is loose. 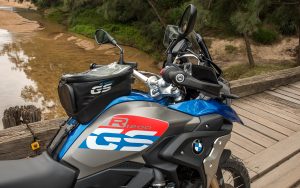 Could I whimper about the cost? No. This is not a LAMs bike where price is a factor because teenagers foolishly feel that food is more important that buying a motorcycle. You’re getting exactly what you’re paying for with the Rallye X. That is why you’re shopping at this end of the spectrum. And price should never dictate what bike you buy. If you want it bad enough, you’ll get the money.

This is the Big End of town. And it has no shortage of players. GSs make up about half of all of BMW’s sales. As a result, the GS range has been pretty comprehensive for a few years now, and with the advent of the X is rather more complete than ever, I reckon.

It’s always a strange kind of conundrum when a bike you’re meant to be reviewing just transcends your expectations. What do you say about it? How do you critique something that delivers everything it promises and more besides? How do your words not end up reading like an advertisement for the bike? 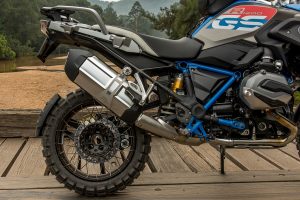 I guess it comes down to how riding it makes you feel, and while everyone has their own feels, some feels are universal to all motorcyclists. Especially in the Adventure bike segment.

A great Adventure bike must above all things be capable of true adventuring. It must fill the rider, no matter his level of skill, with confidence and inspire him to attempt roads and trails he might not otherwise essay. It must sit in his garage, pregnant with possibilities and whisper to him about riding to Yuryung-Khaya, Wulanzaigesenxiang, Ukdungle, or even Moe.

In short, it must look and feel and ride like the business it purports to be about.

But it must also have an ability to carve sealed corners near and far with serene aplomb – which is where things like the cheap and cheerful jobbies fall apart. It’s one thing to love your 500-buck second-hand Jap 400 when its chugging along the shores of Lake Baikal, but how much you gonna love it doing the Stelvio Pass?

An argument can be mounted that a base GS would do all of this. And yes, it would. But would it do it as well as the Rallye X? Well, that really depends on you. As far as the Rallye X is concerned, it’s just a matter of you bring it, and it will deal with it. Brilliantly.

It is, after all, the best GS ever made. 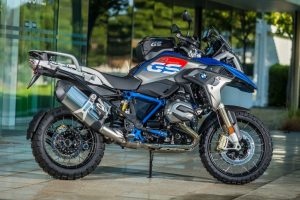