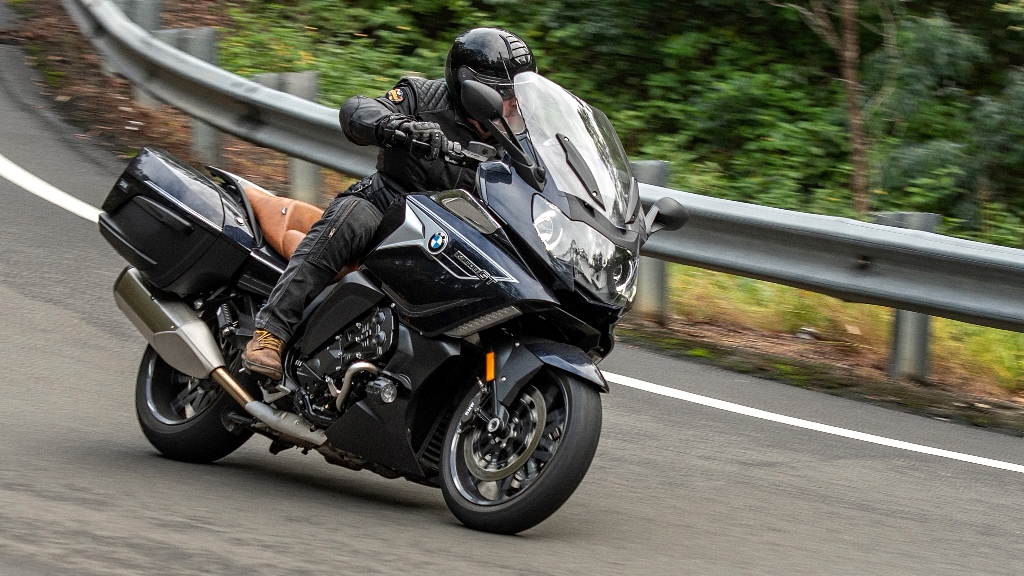 Right after the good people at BMW demanded I return the K1600B (for Bagger), those same good people pushed me aboard another variant of this astonishing motorcycle – the K1600GT Spezial Option 719.

How could I refuse this push?

And so began a relatively long relationship. One that saw several thousand kays roll under the K’s handsome mag wheels, and one which gave me a far more complete understanding and appreciation of this motorcycling niche.

Only two bikes occupy this niche.

One of those is the Honda Goldwing, and the other is the BMW1600 in all of its three variants.

The niche, if I can define it, goes like this:

If you want a motorcycle that tours with superb aplomb, allows you to carry more luggage than you might ever require, permits you to carry a pillion in total luxury, addresses every possible electronic enhancement you might think a motorcycle needs, and will, if called upon, blow your mind with its ability to dance through corners and eat distances with equal ease, then this is where you shop. 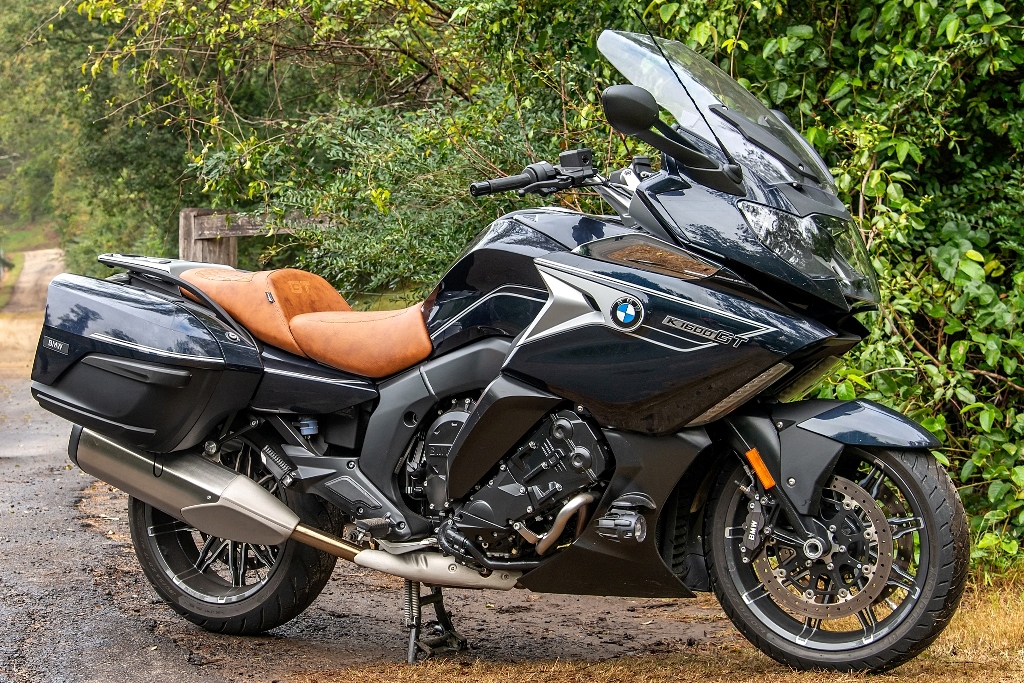 So the Spezial Option 719 differs from the standard K1600GT in a few cosmetic areas and standard goodies. It is also different from the Bagger in terms of different ergos and a smaller (but just as effective) windscreen – and if you want to know, I prefer the Bagger, but only because it’s black, looks nastier and has integrated footboards.

The Option 719 variant of the stock K1600 has gorgeous wheels, metallic paint (either blue or gray), a brown seat (which you don’t have to get, you know), and a full battle-array of the very finest electronic rider aids and goodies…

Cornering ABS, an adaptive headlight, Bluetooth radio and interface, hill start control, reverse, tyre pressure sensors, xenon lights (astonishing) keyless start, quickshifter up and down, LED fog lights, anti-theft alarm system, two power sockets, heated seats and ’bars, Dynamic ESA, plus cruise control and Riding Mode Pro (Rain, Road, Dynamic). It is, quite frankly, the absolute pointy end of the big pro-touring bike niche. Only the LT variant is more luxurious for the pillion. It comes with a top-box and a special seat with armrests for Her Imperial Majesty to recline upon in comfort. 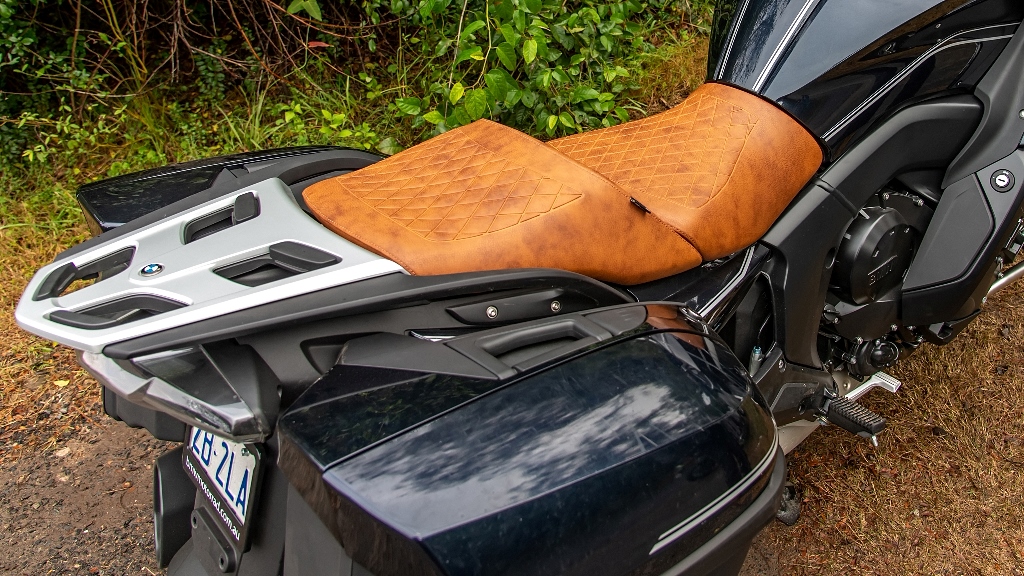 But even without that pillion-pampering, the K1600GT’s level of electronic wonders is almost too much to absorb or even utilise – and I really needed some time to come to terms with so much technology at my fingertips.

Sometimes I wondered if a man really needed so much high-end electronic stuff to be going about his business. I guess the answer is “not really”. But the qualifier then becomes; “But how bloody great is it to have it?!”

And it is altogether great to have it.

It also kills time on those long stretches of empty highway when you’re sick of Waylon Jennings and think some Lady Gaga would be better.

After a while you start to take all the tech for granted, and then it all becomes seamlessly integrated into the ride. Which is when I stopped pulling over to the side of the road and scrolling through the menus to change things. Familiarity did not breed contempt in this instance, it just offered acceptance and a little cheerful insouciance. But with great comfort and the seamless ability to travel more than 400km without pausing for petrol, comes size.

I am stating the obvious, but yes, she is a big girl and she is not light. Despite that, you would be amazed at how hard you can punt it through the twisties. The Bagger I rode before was also surprising like that, but its more laid-back, feet-forward ergos precluded me channelling Rossi to perfection. 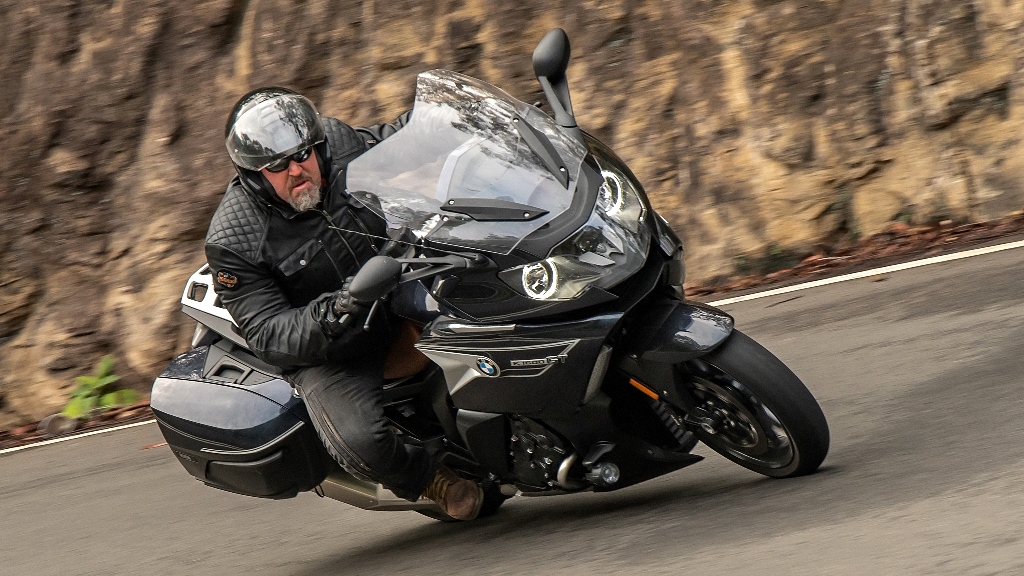 That was not the case with the K1600GT. The riding position certainly allows you to apply yourself with a will to any and all corners.

The engine is a revelation. It sounds fearsome and it acts fearsome. You may waft along the highways in top, like a greased Sumo wrestler sliding through a glass paddock covered in warm butter. All is bliss and all is dignity and all is majesty.

But it is also a hot rod when you want it to be. Turn up the pace, then turn it up some more and then just a tad more – and if they catch you, you’re going to jail, even while they call you “Sir” as they clap you in chains.

Because I’m programmed differently to how you might imagine the normal staid and conservative BMW touring rider is programmed, I very much revelled in this aspect of the monster. 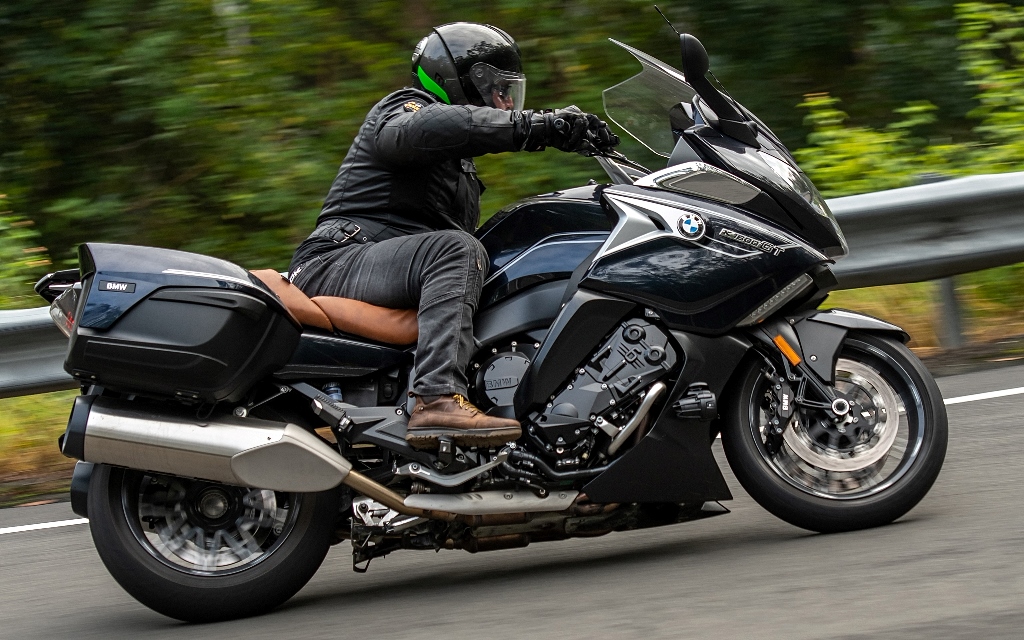 I rode the K1600GT in town and in traffic, and it took me a while to get used to the way it takes off from the lights. All the Ks have a unique way of involving their throttles with the clutches on take-off and sometimes you tend to over-rev it all a bit. You get used to it and you compensate, because that’s what grown-ups do. Around town it’s perfectly balanced at low speeds and if you can fit your arms into the gap between cars, the rest will also fit.

The gearbox is still a bit notchy, but that magnificent quickshifter makes that a non-issue. It is better than you will ever be at changing gears in both directions.

Two little things made me flare my nostrils a bit. And these are such First World problems I am ashamed to even admit to them. And I blame myself entirely. 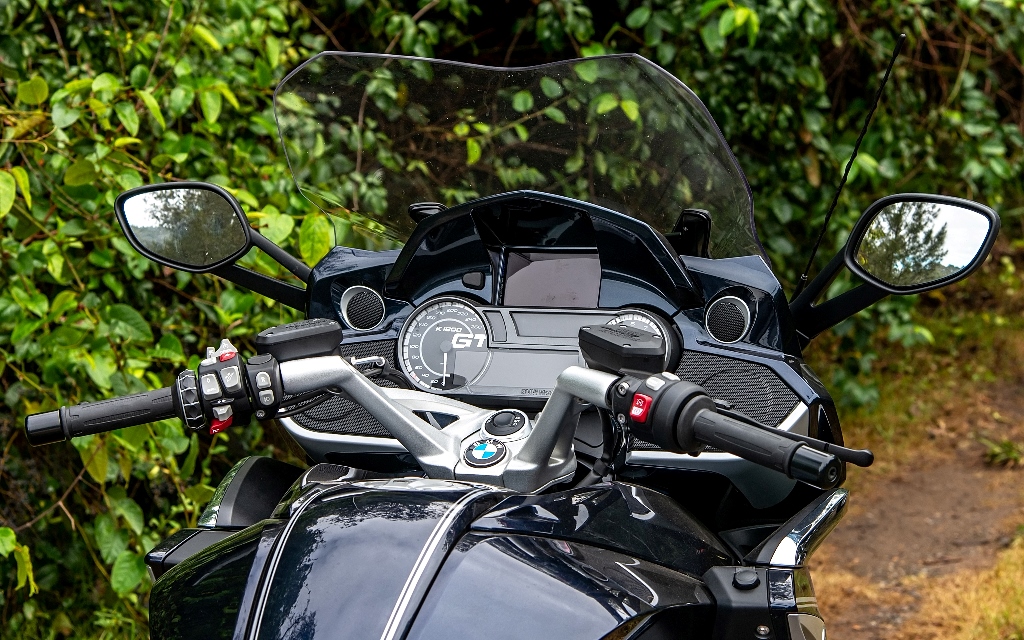 The first is the round controller-of-everything that sits between the left handlebar and the switchblock. Sometimes, when I would use the blinker-switch so the idiots behind me could see where I was going, I would clumsily snag the controller and the radio station would change. I would then have to change it back.

So there’s that nightmare.

And then sometimes, if I was less than my usual hunting-leopard graceful, by boot would snick the top of the panniers during the dismount. The panniers come off very easily, but as I age, my love of hard luggage just grows and grows. So I left them on and was more careful.

The dash is full of information, but it is well laid-out and readable, and relatively simple to scroll through. Now and again it would terrify me with its awesomeness, but that was early on in the piece and I got used to it. 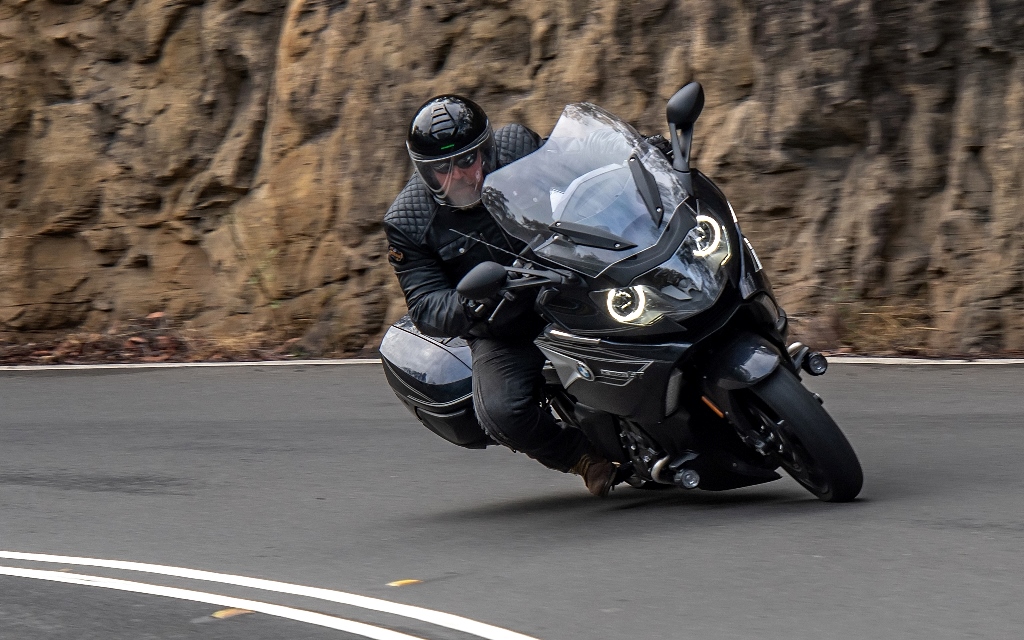 And I got used to treating long distances with absolute indifference. It is the decision of a mere moment to decide you are riding to the other side of the continent. You toss your needful things into the panniers, press the remote locking thing on your fob (a key symbol helpfully appears on the dash to tell you all is in ordnung), throw your leg over the bike, settle into one of the best motorcycle seats ever made, and ride off. You will arrive in exactly the same physical shape in which you left. Unless you ride into a tree, of course. But you already know that.

Should any bends appear on your way, then you will acquit yourself with aplomb and elan. When your mates tremble with weakness and seek to pull over to rest and replenish their dinky little motorcycles with petrol, you will wave to them and see them at the next servo. They will be the ones stretching and bending and trying to get the blood moving in their numb parts. You’ll be the dancing bloke. 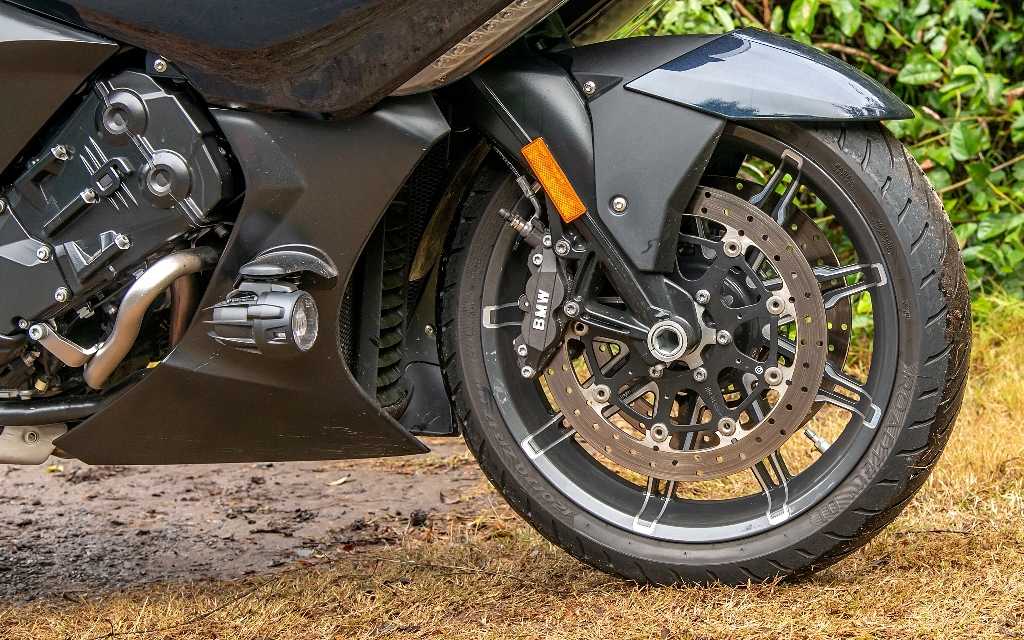 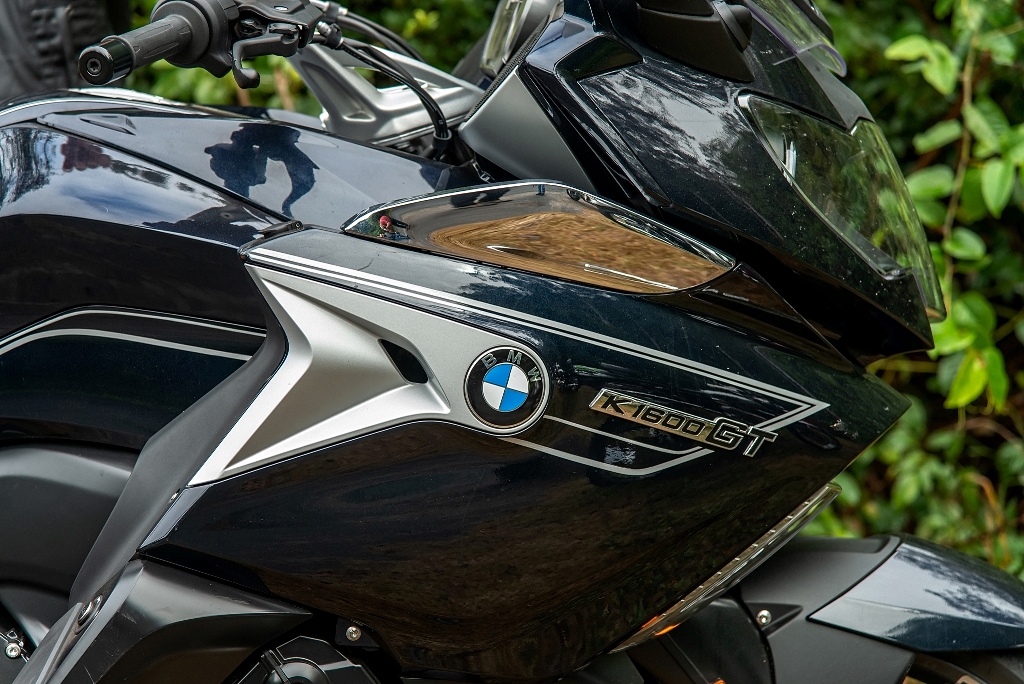 BMW rightfully owns this niche in the motorcycle market. It offers several variations on the theme, each of which is unique enough to justify the variant. All of the Ks are underpinned by that astonishing six-cylinder engine, superb ergos and handling that totally belies their size and weight.

It destroys distances and it carves corners. And it does that effortlessly while cosseting the rider with a level of comfort that is truly first class.

That is one hell of a bottom line, huh?