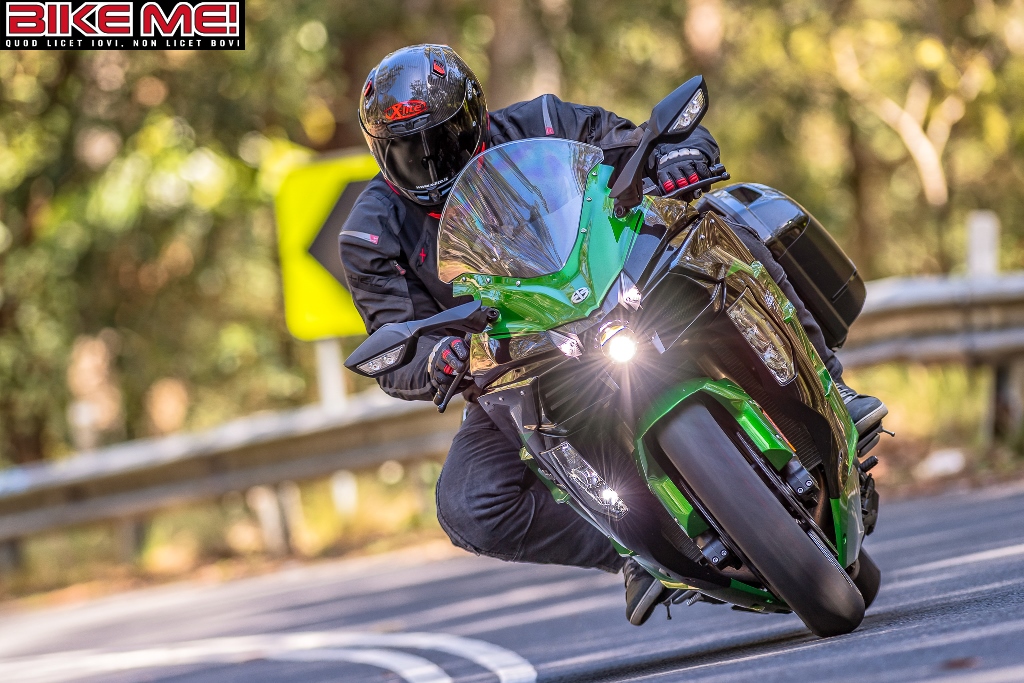 “Oh my…” I mouthed as the hurtling began. “Oh great stump-jumping Jesus of Nazareth…oooh…”

And then there was no more talking to myself. There was maybe some fractured internal dialogue to do with possible defences in the forthcoming criminal trial, but I was pretty much mute and dry-mouthed as the H2SX showed me it’s stuff.

And we surely did hurtle some.

I will admit to nothing. I will confess to even less. It won’t make any difference if it all goes to trial, but I need to not be seen to be an advocate for anti-social behaviour.

“I was just redefining acceleration, your honour”, is just not going to play well as a defence.

So let’s just all regard the hurtling as fantasy, shall we?

But before I begin describing the indescribable joy of firing a supercharged set of panniers at the horizon, I need to address the technical aspects of the H2SX. I do this so you’ll know that while Kawasaki engineers might have bolted some hard luggage onto the H2’s arse and dubbed it a “sports tourer” (while doubtlessly giggling into the company sake bowls), this is a more powerful and rideable bike than the stupendous H2. And panniers aren’t the only things the Green Machine has added to make it so. 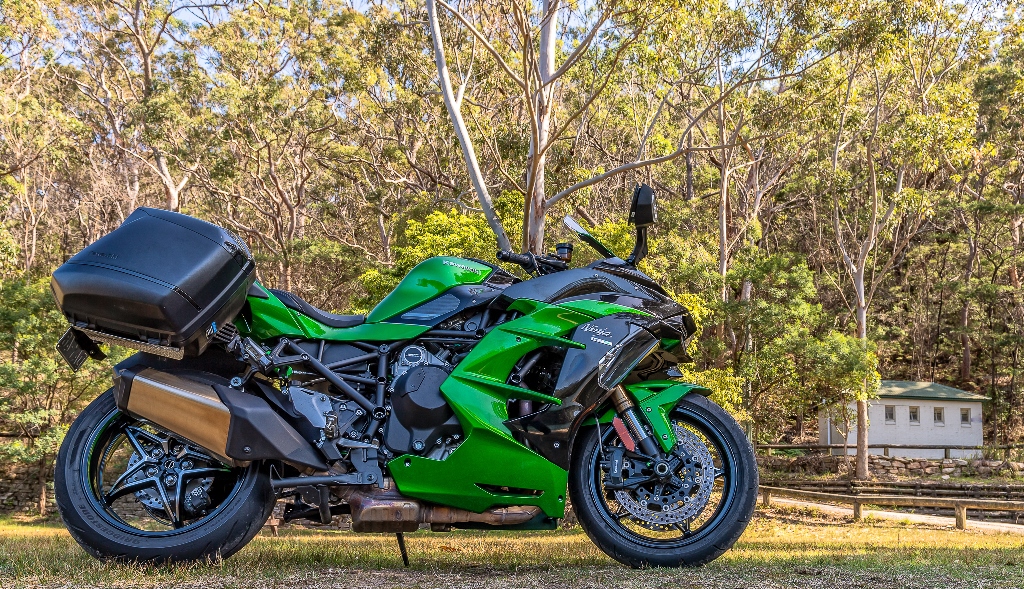 Power is boosted by smaller throttle bodies (down to 40mm from 50mm), a smaller ram-air intake, and headers (2.2mm smaller in diameter). How so? Is not bigger better in all things? Apparently not with forced induction. This downsizing helps boost flow velocity at a lower rpm than the H2.

The impeller blades on the superchoofer (which still spins at 9.2 times the rpm of the crank), have also been reworked. The shape and angles have been changed so you have better pressure at lower rpm. And to better fill those cylinders with explosions, the cams have a lesser duration and overlap. 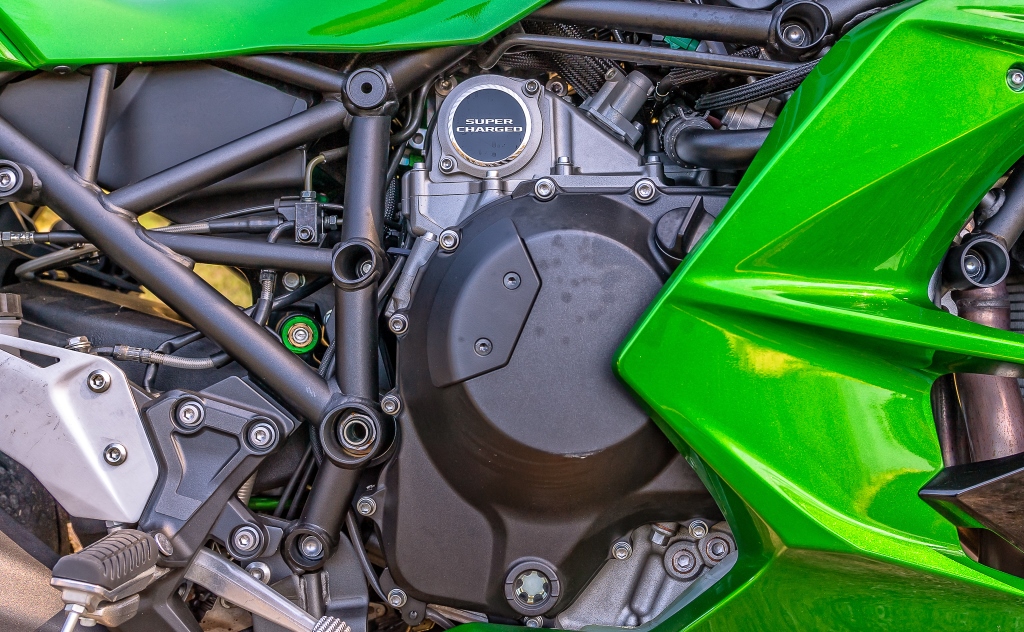 And it just seems to accelerate faster and harder as the tacho climbs up towards the soft-limiter at 12,000rpm.

It really is breathtaking the way it does this, and you really do have to remember to breathe.

Acceleration redefined…hell, reinvented actually, I swear, your honour. It was a science experiment.

Electronics have also been enhanced on the SX.

The Bosch IMU works in five axes, while there is a sixth yaw axis (rotation around a vertical axis), which Kwaka’s own software deals with.

The traction control has four modes including off. Mode 1 permits burnouts and wheelies and six years in Long Bay. Mode 2 will leave you with home detention.

Mode three is for when you’re riding in the rain, but no-one does that anymore, so we won’t worry about that.

The TFT dash is dazzling. It has everything, like Netflix. And you can change the display to suit your desires – Touring or Sport. Do not do what I did and stare at the lean-angle indicator while cornering. It’s a trap for young players, that. 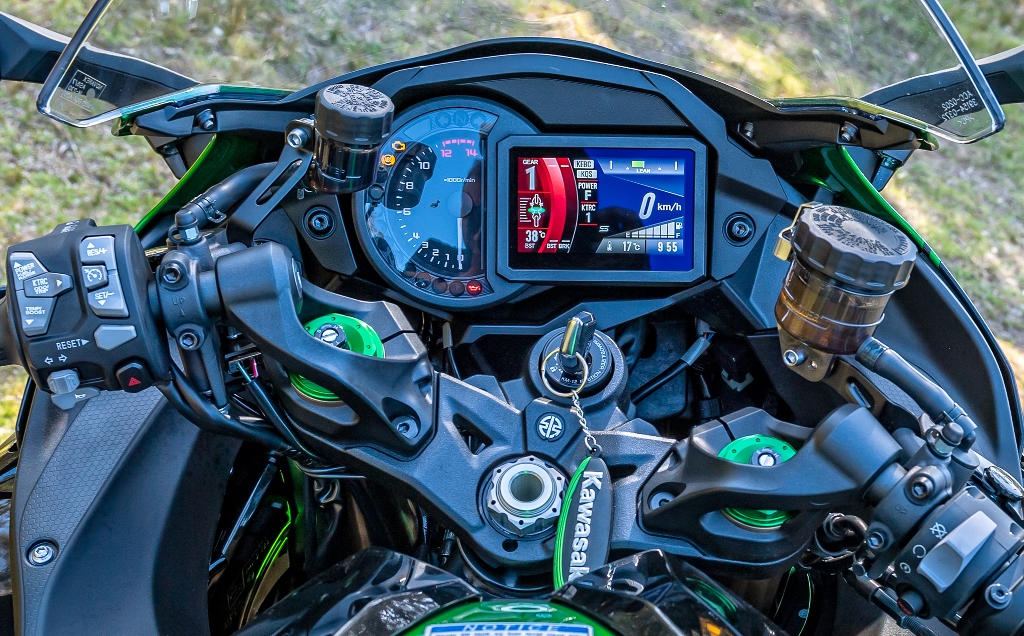 There are also cornering lights, Cruise Control, an up-and-down quickshifter (and a very good one), and a new slipper-assist clutch which makes the lever pull a little less effort-filled.

All very welcome and useful tweaks for a…um, touring bike, as it were.

The chassis has also undergone some treatment to bring the SX more into the exclusive Batshit Crazy Touring niche. The back-end has been beefed up to handle a pillion and luggage, and overall rigidity has been increased. Lowering the centre of gravity, while still maintaining great ground clearance was a priority. The engine has been canted forward an extra two degrees, the swingarm lengthened 15mm, and the steering head has been pushed forward 15mm, thus increasing the wheelbase by 30mm, and obviating the need for a steering damper.

It’s suitably comfortable for touring and the screen works and so on and so forth.

But while all of this tech-stuff is beaut and right and wonderfully engineered by Kawasaki, when you bang that throttle open and what feels like the power of a million suns starts to dance…well, that right there is what the H2SX is really all about.

There are better long-haul touring bikes. 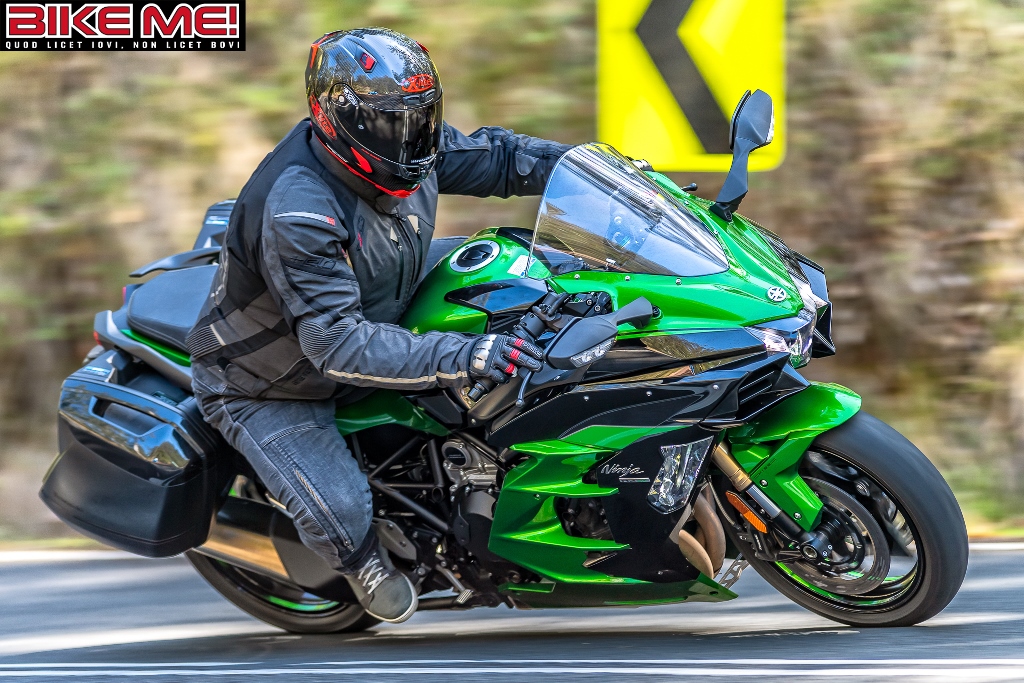 But not one of them bangs like this. Not one.

Overwhelming, astonishing, redefining acceleration – pretty much everywhere in the rev-range. It’s normal when you’re normal, but it’s an order of magnitude crazier than you can imagine when you call upon it.

It steers precisely, but you do need to ride it. It’s not a sportsbike and it doesn’t handle like one – thank Christ. It handles like the big, long, pannier-equipped, touring weapon it’s designed to be. It takes a little rider involvement, physically, to get it to dance in corners, but I love that kind of stability in something this powerful. The adjustable suspension is more than up to your harsh demands.

Stylistically, it’s got a bit of the nasty alien busted-crab about it, and the panniers don’t do it any favours in terms of aesthetics. All those stick-outy bits probably do serve some kind of brilliant aerodynamic purpose, and they do give the H2 range its especial and unique appearance.

I actually quite liked its appearance. And I thought the panniers lent it an air of almost puckish insouciance. Like it’s saying “Yeah, I can carry your stuff and your girl for you, but it’s all going to happen at twice the speed of sound, but let’s look at the panniers and pretend for a second like I’m a normal touring bike.” 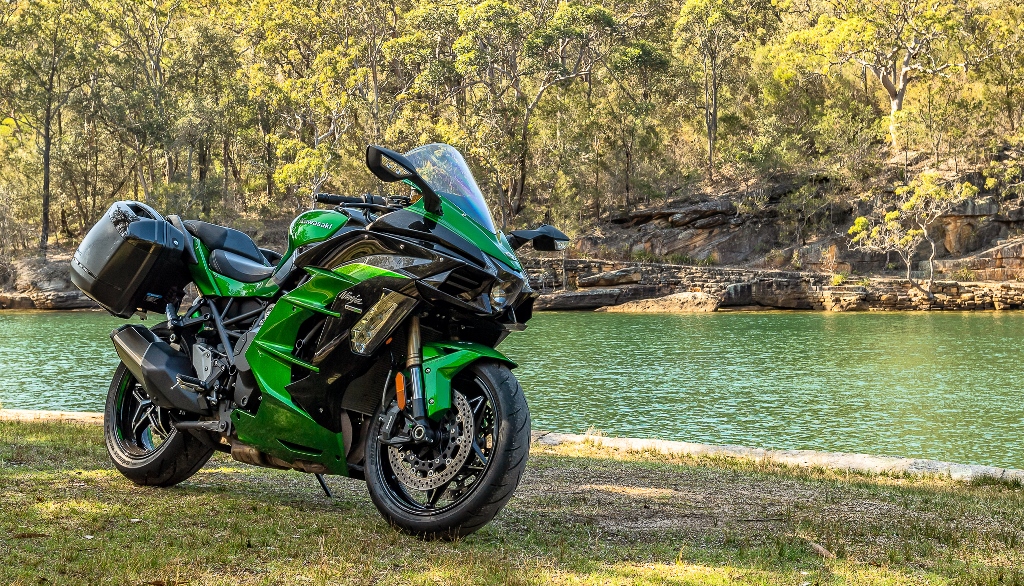 There is little about the H2SX that can be deemed “normal”. That whistling, nuclear boost-plant buried in its guts make sure of that every time you get absent-minded.

It is an unalloyed thrill to ride. You will never once wish it had more of anything anywhere. You will ride secure in the knowledge that if needs must, you can hose most everything on the road in a straight-line duel. It’s wonderful knowing that. You may never actually do that. But it’s so very satisfying knowing you can.

I think that’s the H2SX’s greatest appeal. The sheer perversity of the concept – a supercharged touring bike – which feels perfectly normal, easy and pleasurable to ride (even though there is always the feeling of immense potency at the throttle), until you want it to leave earth’s gravity. Because it will.

And then you’re no longer touring.

You are now transcending.

Your mind is trying to cope with the rate of acceleration. You know you’re going to jail if they catch you, and you keep forgetting to breathe…but you keep on that throttle, rolling the dice and hoping they’re not around the next bend, or just over the rise. Who knows, maybe they will look at the panniers and think their speed detection device is defective.

Which is really your only hope.

Thank you, Kawasaki. Thank you for building such a thing. The world, if it’s not to disappear up its own nanny-bottom, needs more things like this. 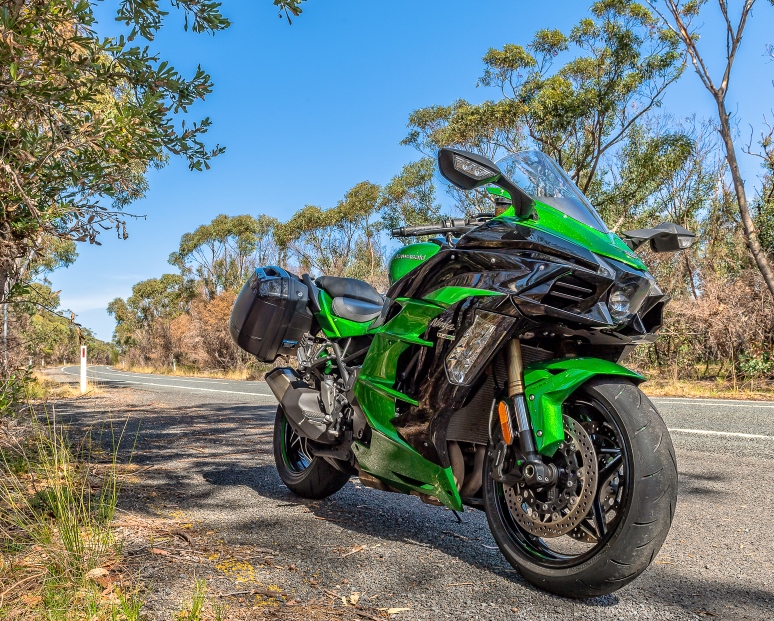 We live in a country which slowly seems to be having all the fun leeched out of it in the name of bastard safety. If this was Europe and there were autobahns, the H2SX would be a no-brainer purchase. Munich to Berlin (580km) in maybe three hours, maybe even less – yeah, you’d just have to have some of that.

But here in Oz? Well, like any right-thinking bloke, you’d just have to pick your time and place.

A good place to go touring on a motorcycle.

Q: Is it faster than every other bike?

A: Are you faster than every other rider?

Q: What is the payload?

A: You’ll get 300km out of a tank. Unless you’re in a hurry. Then you’ll be fueling up around 220km. That supercharger starts drinking schooners instead of middies when you’re on it.

Q: Do the panniers come off easily?

A: They are 28l Givi units, so they’re good quality and yes, they come off easily. But you cannot get a helmet into them.

Q: Does it have a USB thing so I can upload my terror on Facebook?

A: Nope. It’s got one of those ancient 12V socket thingies instead. 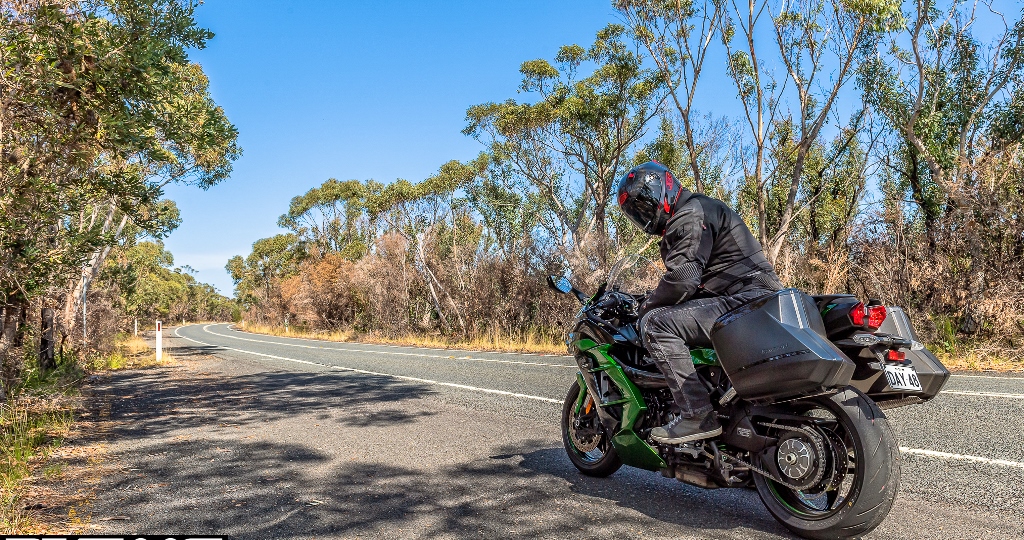 For tech details and prices please go to: