And sometimes, they align in my garage, which makes me suspicious and tetchy.

So on this day there were two Bobbers behind the roller door, and I was very suspicious and tetchy. 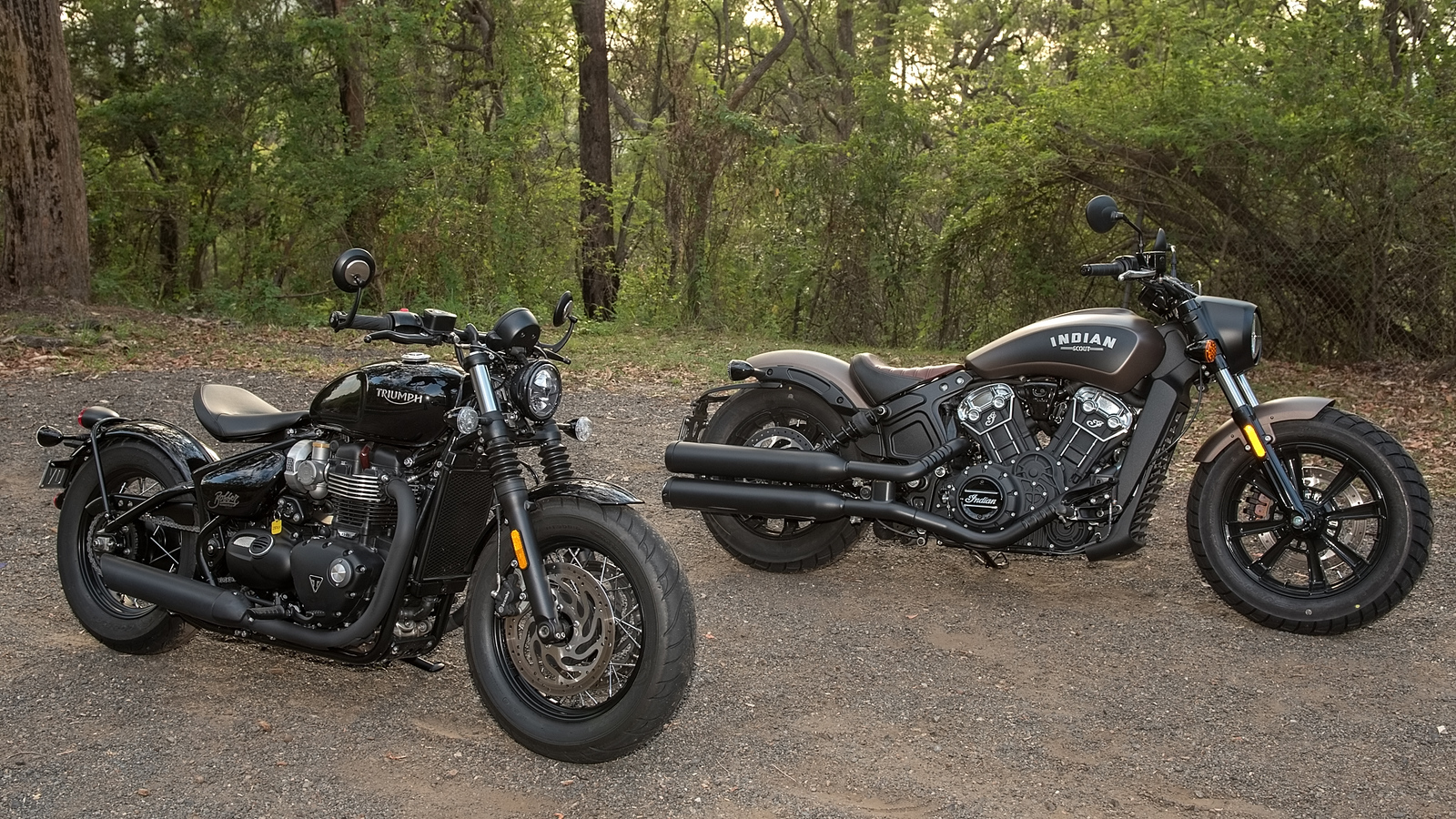 The only possible and legal way to alleviate my suspicions and calm my tetchiness was to take them both out and ride them back to back.

The other way was to take drugs and consort with loose women, so I left that as a fall-back position.

So two Bobbers. One from the USA and one from England. Both were wearing badges wreathed in nouveau-heritage – and I was OK with that. I hope all the great brands are resurrected the way these two have been. The motorcycling world is richer for having late model Triumphs and Indians in it – and all you old school weirdos grizzling about how neither of them are the Real Deal, wheel your Zimmer frames over there, adjust your wee-smelling tracksuit pants over your failing hips, and be quiet. 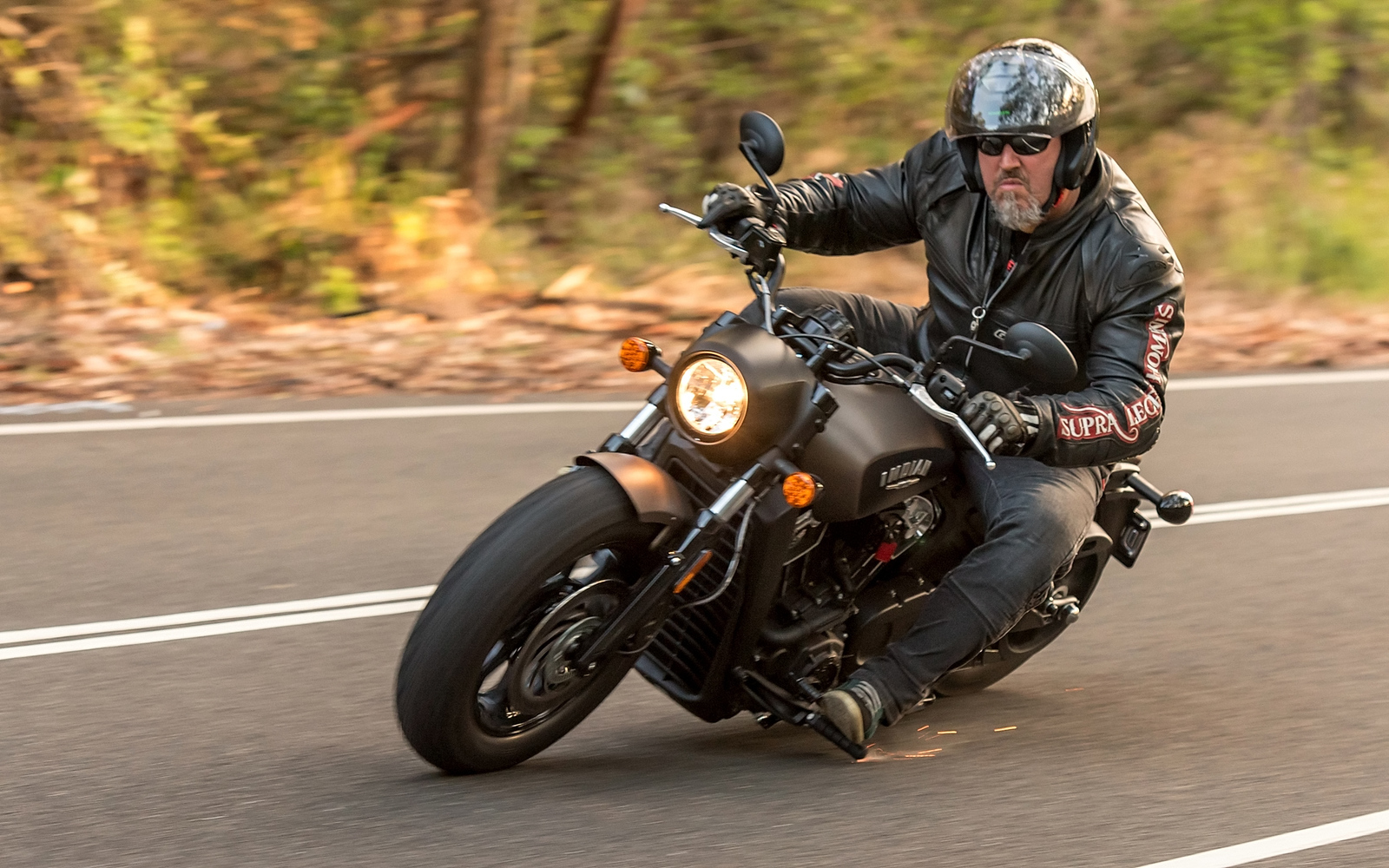 Now since I cannot ride two bikes at once, I called upon young Harry Warne to assist. Harry is 22-years old. I have T-shirts older than him. But he rides well, loves motorcycles like all of us proper retards, and knows nothing about Bobbers or cruisers. So he was perfect as a bike mule.

But before I start with the eeny-meeny-miney-mo thing, I will offer a brief summation of the term “Bobber”.

No, the bearded women did not invent this term. 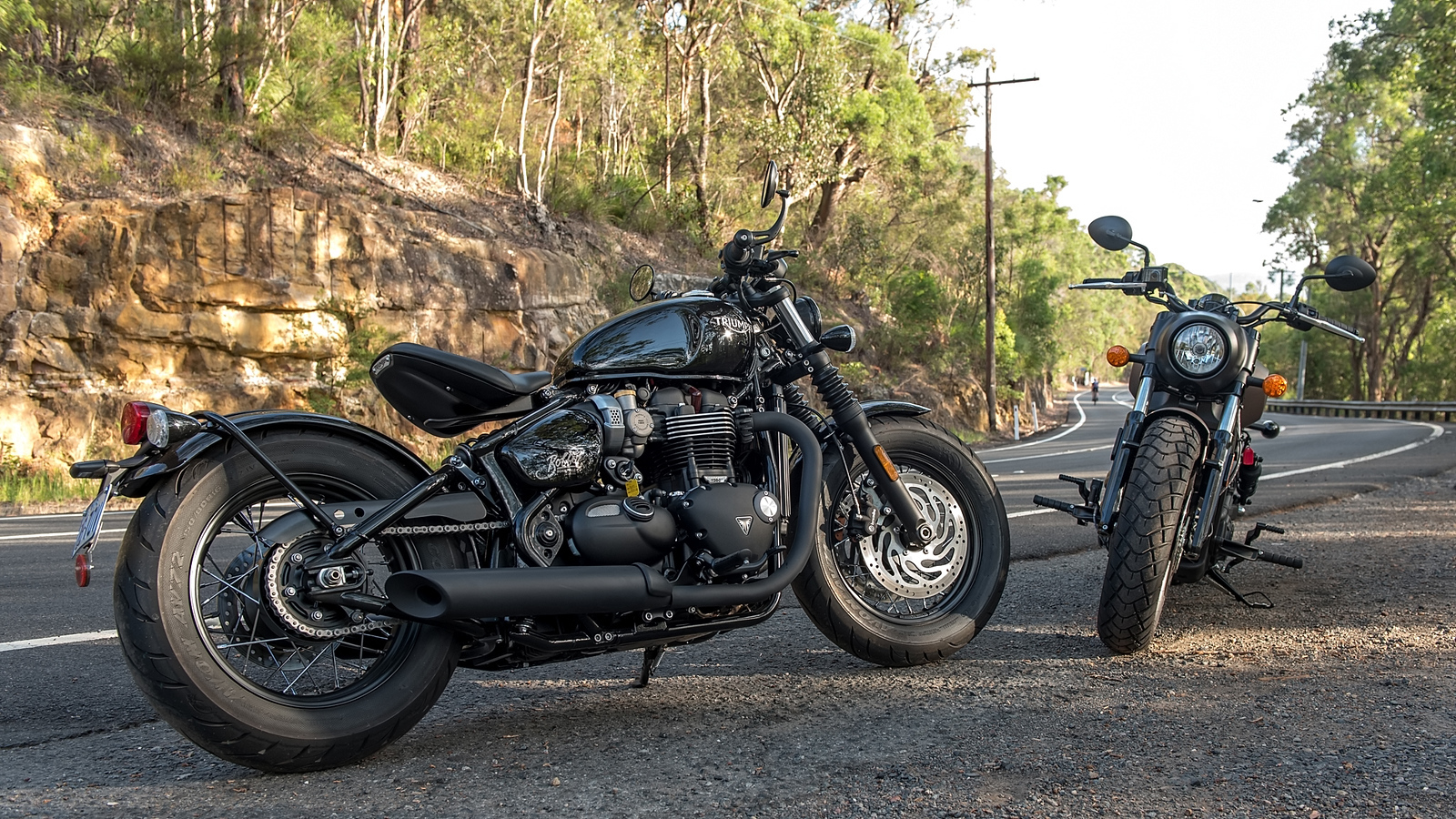 It is an American term which applied to Harleys which had been “bobbed” back in the late 40s. One could consider one’s bike “bobbed” when one had taken off all the extraneous stuff, shortened the back guard (bobbed the tail) and removed the front guard. This bobbing process served two purposes back then.

The first was that if you took a whole bunch of stuff off your Flathead/Knucklehead/Panhead/Shovelhead, then it wouldn’t fall off by itself.

The second was that you would change the appearance of the bike. It would look tougher, and so, by extension, would you.

So there was really no reason not to turn everything into a Bobber back then.

In this Year of our Lord 2018, motorcycles no longer shed parts as you ride along, and no-one is allowed to be properly tough anymore because it’s against the law.

But faux toughness is fine and encouraged. Like women with beards.

Enter the new Bobber – a clever styling exercise by both Triumph and Indian, which actually transcends the aesthetic intent by both factories.

So there is style with substance here.

The Triumph Bobber Black is a variation on the original Bobber, like the Scout Bobber is a variant of the Scout. The difference between the two Triumphs is less cosmetic than it is mechanical, while the Indian’s is the other way around, more cosmetic differences than mechanical. 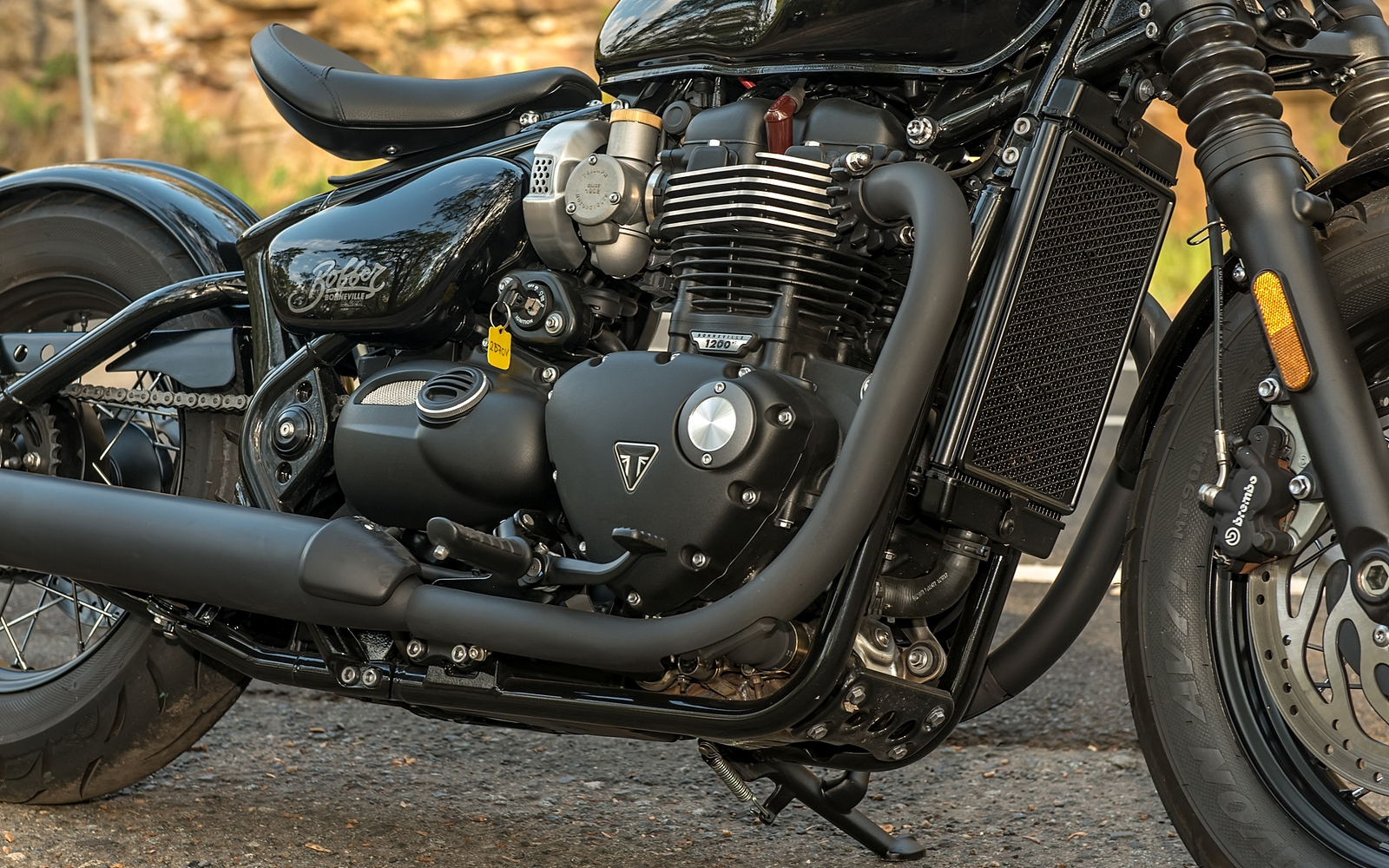 But what we have here are two takes on a common theme.

Both succeed in different ways and while I might prefer one bike over the other, that does not mean you will have the same preference.

Interestingly both bikes have the same pluses – great engines, top-notch finish, and a simple purity to their lines which address the intended design brief quite well.

Even more interestingly, they have pretty much the same minuses…well, maybe minuses is not the right word. After all, these are not faults or issues. They are simply characteristics of this type of bike.

Firstly, I’m not interested in touring on either of them. Both seats are entirely indifferent in looking after you over long periods of time. One is not worse than the other, and the length of time it took for my nethers to go numb was about the same on both. Around town or for short Sunday squirts, they’re fine. And you can of course ride long distances. The bikes are capable of sitting on 120km/h all day. The question you must ask is, are you?

Naturally, their fuel range is linked to long-distance comfort. There ain’t much of either. The Trump holds nine litres, the Indian 12.5. You’ll be spending a lot of time in servos. 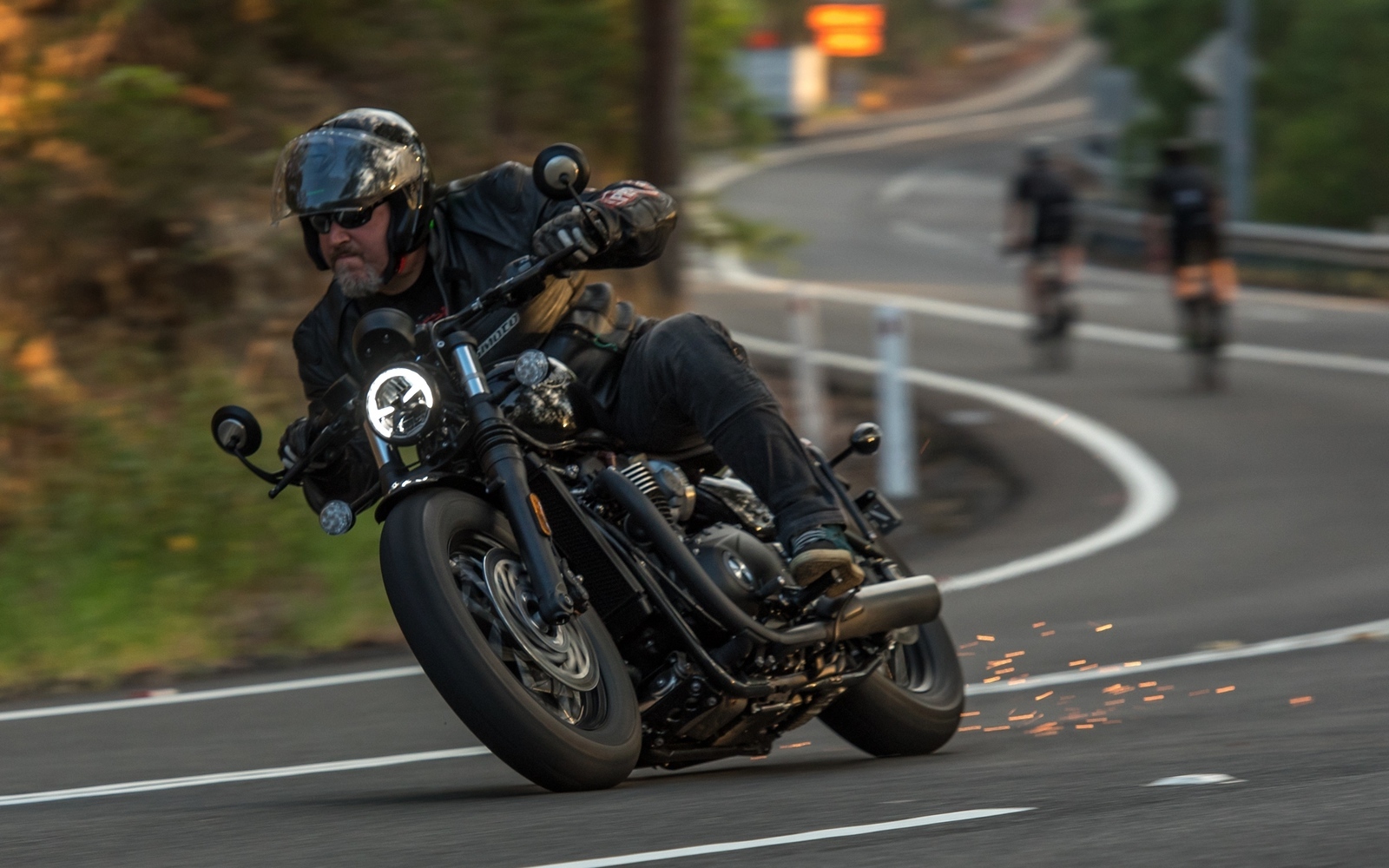 And the follow-on effect is of course luggage-carrying ability – or complete lack thereof.

Both the Indian and the Triumph are the same here. Except I think the Indian may well destroy anything you try and affix to the rear of the bike. That rear tyre will go through the hole where the mudguard used to be and devour your luggage. The Triumph? Well, it will simply throw your luggage into oncoming traffic if you try and tie it to the moving rear guard. It will be hilarious. You should do it and film it on your phone.

So let’s look at the numbers…

So the Pom is a little punchier a little earlier in the rev-range, but the Indian certainly starts swinging as the speed rises.

Both engines are wonderfully responsive and go hard off the line. It quite hard to split them there. 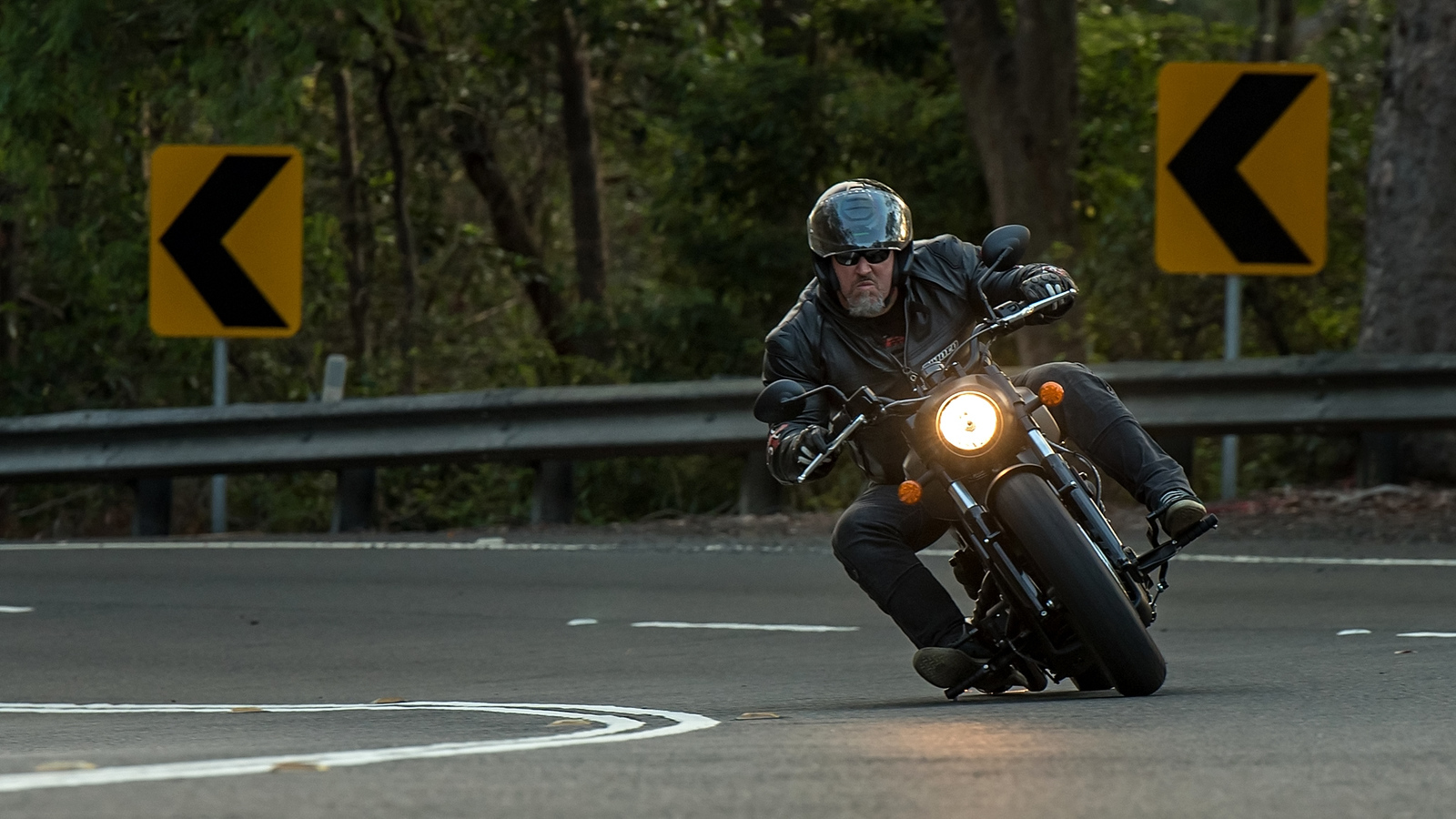 There’s not much between them there either, which accounts for their handling similarities. I might point out they are both improved out of sight by the addition of the Fox suspension options offered by both manufacturers.

I’m not going to bitch about ground clearance because it is entirely disingenuous to do that. These are cruisers. They cruise. You go hog wild trying to impress the girls and you’ll leave bits of bike behind. Same as it ever was.

Happily, they both have a good deal of integrity when you’re arcing them into bends. They will hold the line you want even as they’re shedding bits of their footpegs in fiery glory. 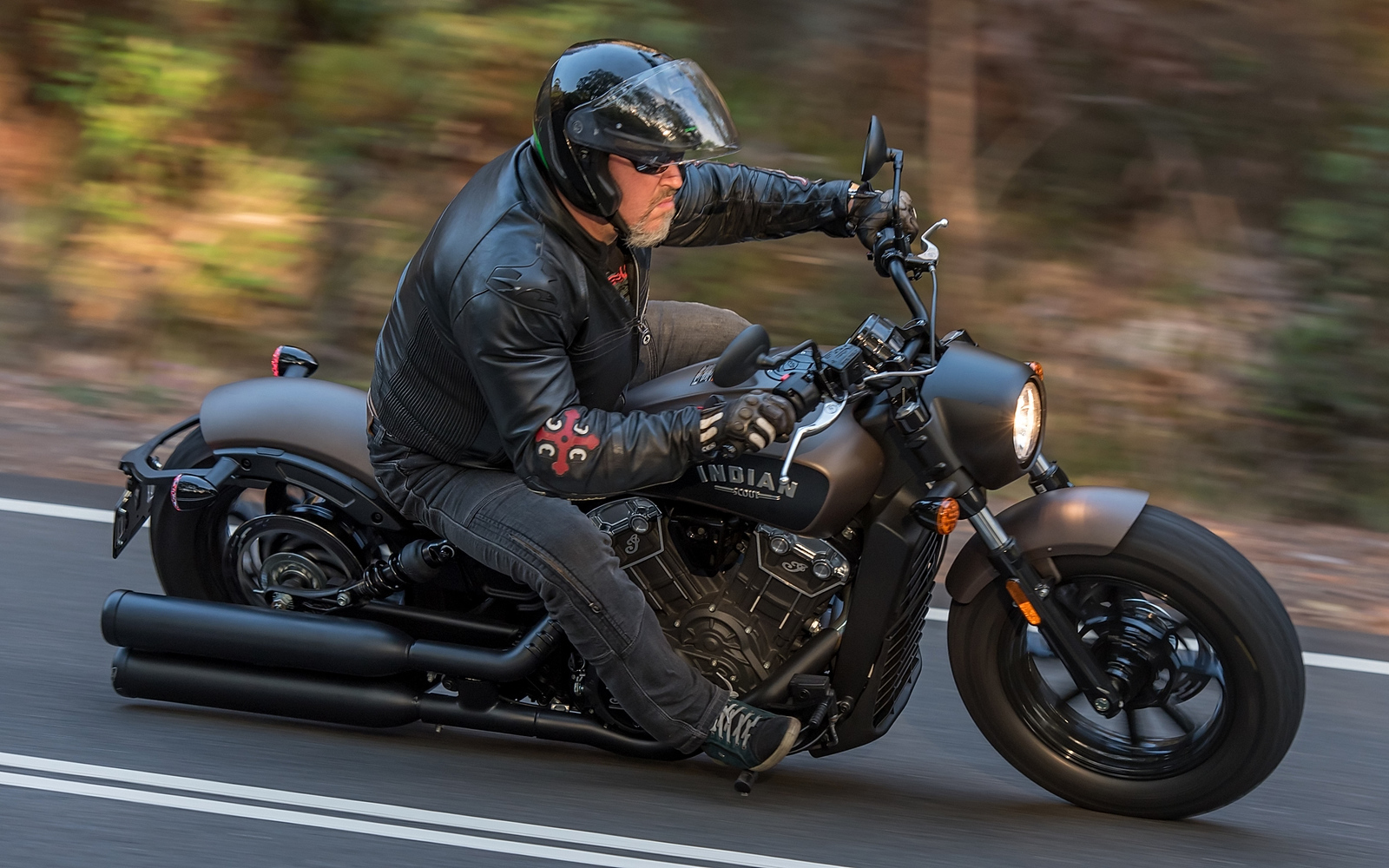 Young Harry, who had never really ridden a cruiser in anger, was setting his shoulders to pass comment on the ground clearance.

“What do you know about single malt Scotch?” I asked, heading him off at the pass.

“Not much,” he admitted.

“Have you spent countless hours in the company of loose women, gunfighters, broken motorcycles, and violent policemen?”

He shook his head.

“Do you imagine your views on ground clearance would move me?”

Smart kid, that one.

It’s only because he likes to murderise corners on his MT-09, that the lesser lean angles on the two Bobbers unsettled him.

“The engines are great, aren’t they?” he offered. “They’ve got a bit of punch.” 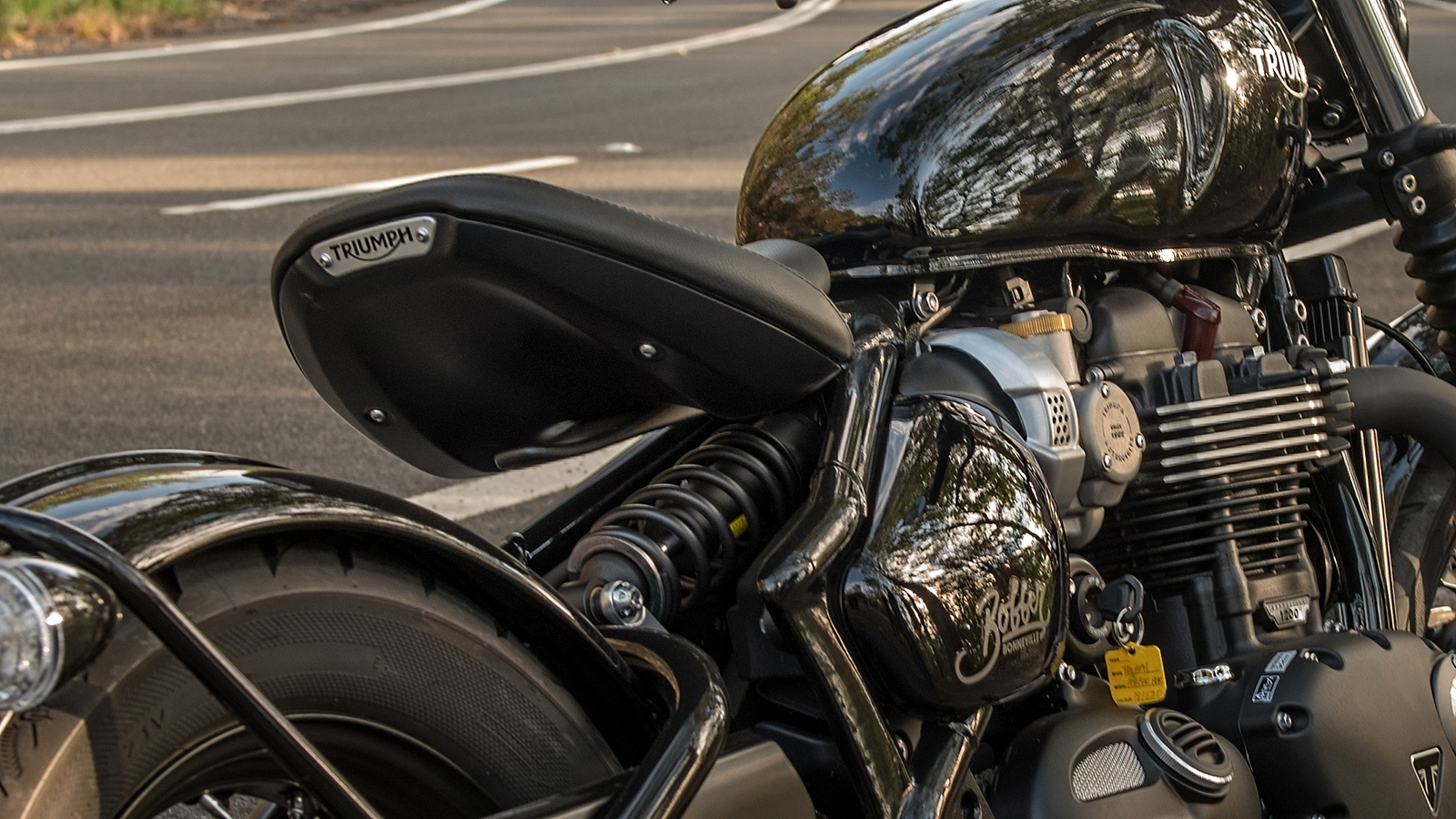 HOW DO THEY DIFFER FROM THEIR BASE MODELS?

The Triumph Bonneville Bobber Black (that’s its full name) has had quite a few tweaks from the original Bobber. The front wheel is smaller (16-inch), which has made it steer a little slower, and I am not a fan of that. I preferred the handling of the original. But then this one has twin Brembos hauling on 310mm discs up front, 47mm Showa forks, cruise control, and a killer LED headlight with hell-sexy running lights. And it’s been en-blackened. So if I had to pick between the original Bobber and this one, it would be this one, and slightly quicker steering be damned. We aren’t out doing track days on it, are we?

The Indian Scout Bobber now looks a whole lot more aggressive that its Scout progenitor. But the differences are mainly cosmetic and ergonomic, apart from the much better dampened cartridge forks.

It’s been lowered by 26mm (remember we aren’t doing track days on this either), the footpegs have been moved 38mm closer to the rider, the handlebars are wider and the back guard has been sawed off in true Bobber style. Oh, and the seat is said to be more comfortable, but that is a relative concept on both of these bikes. I have been with Scouts that have been ridden to Alice Springs, so anything is doable. But as I stated earlier, neither of these bikes is going to overwhelm you with bum-comfort. 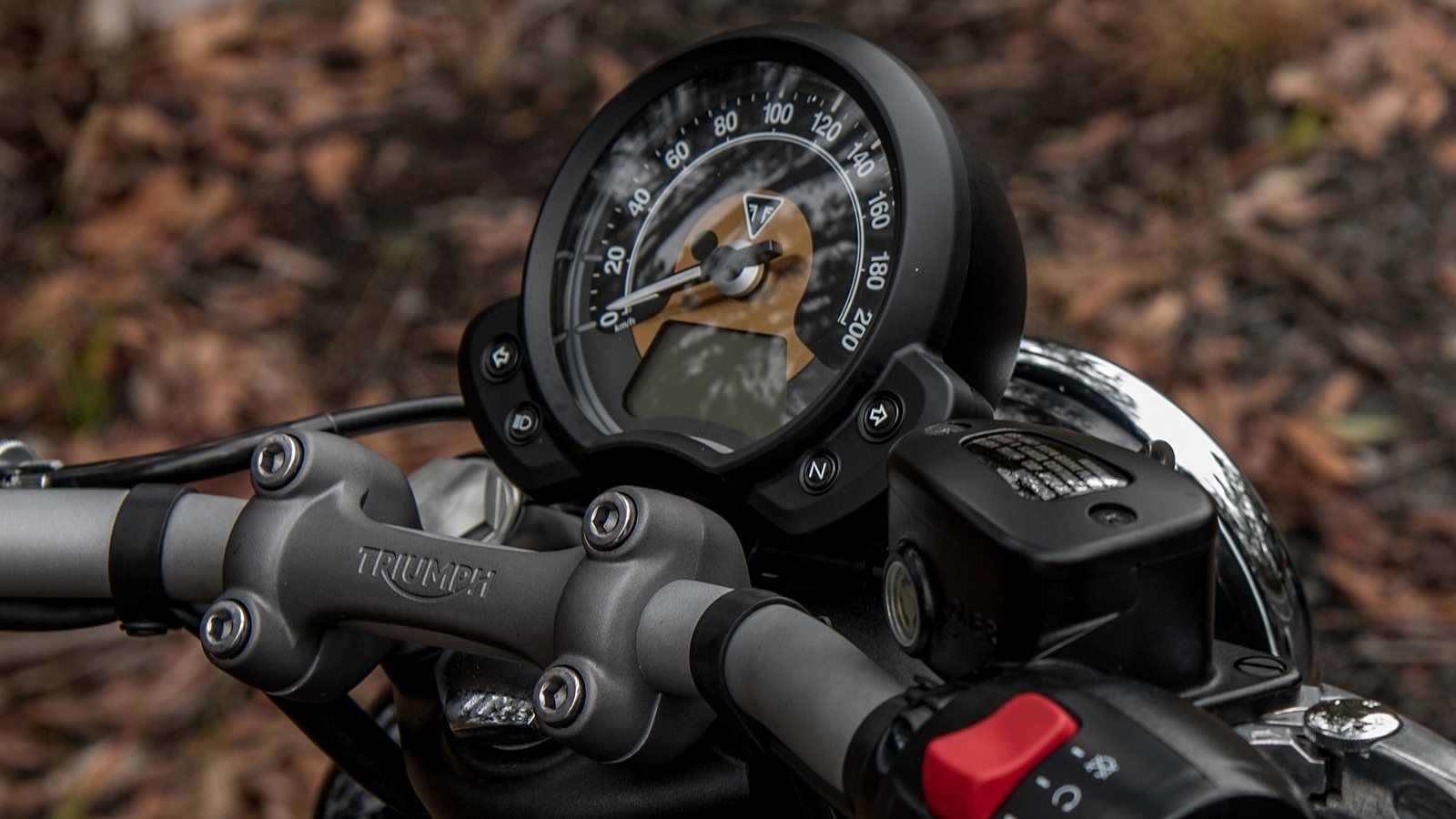 THE RIDING OF THE BOBBERS

In real terms, terrible people like me, and feckless, rampant youths like Harry, are always going to push bikes like this harder than an owner will ever ride them. Brother Silverback’s missus has a Triumph Bobber she adores, and she looks at me blankly when I ask her about ground clearance and comfort.

But they do work well on the road despite their lack of Gixxer lean angle.

Normally, bikes with fat 16-inch front wheels don’t embrace corners. Both of these bikes have been engineered so that they tip in easier than you’d think and hold a line better than you’d imagine. They’re also suspended well enough not to give you conniptions by wallowing or weaving alarmingly if you hit a bump mid corner, which is always good. 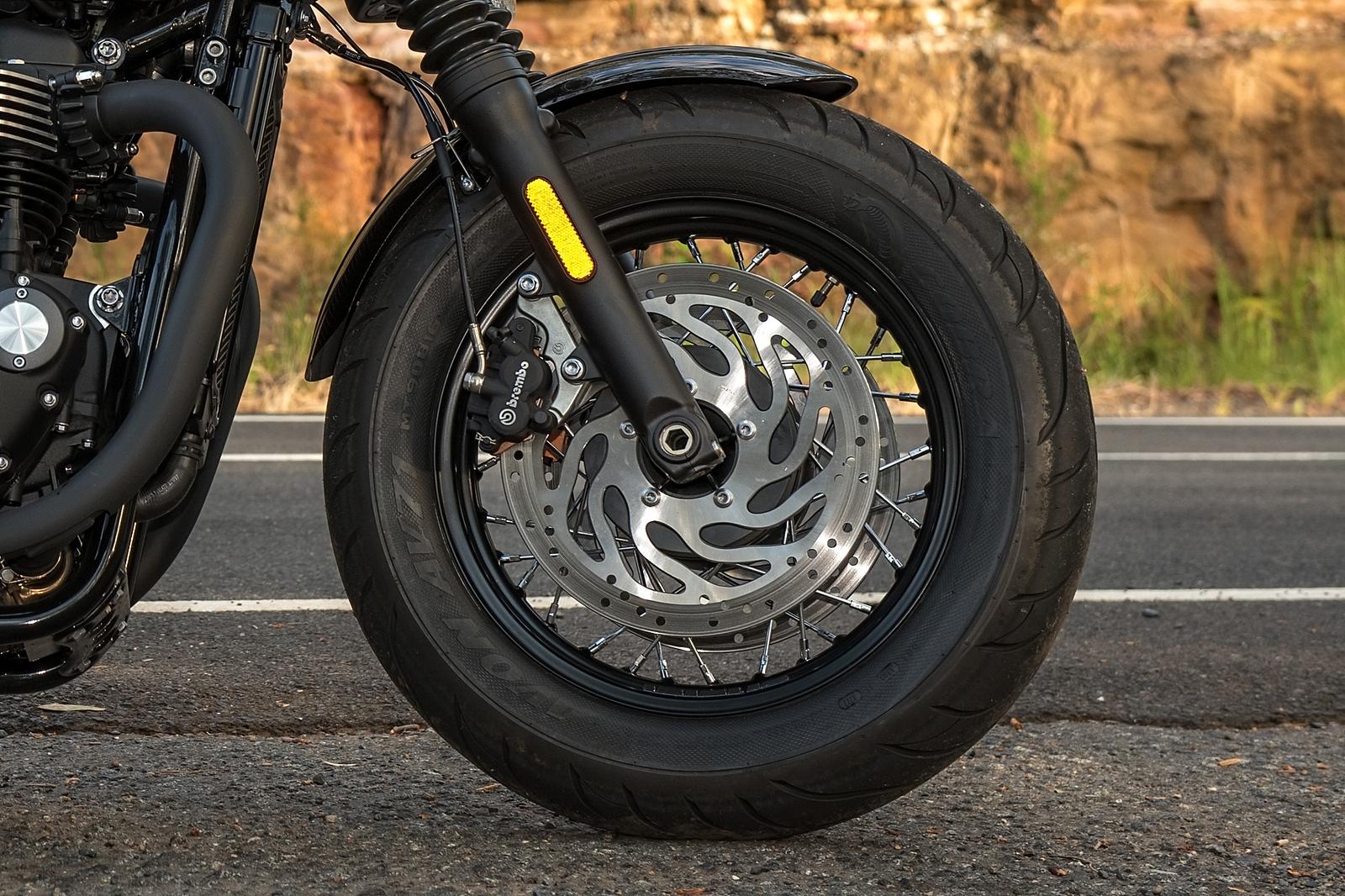 I thought the brakes on the Triumph were a good deal better than the rather oak-like single-disc set-up on the Scout Bobber. Indian should bung another disc on there, I reckon.

Both feel small and light. This is an anomaly in Cruiser World. And the seats are so low, even Tyrion Lannister could get his Game of Thrones on. If you’re lacking long, sexy legs, this is where you need to be bike shopping.

WHICH ONE WOULD I CHOOSE?

I guess it comes down to the look and feel of the two packages. As it should in this genre of bike. People who are buying these are buying them more for the evocative way they massage their style glands, rather than how they handle a decreasing radius right-hander they’ve entered at 200 and are now praying to Jesus they’ll be able to exit without dying in every way possible.

Aesthetically, they are worlds apart.

The Triumph Bobber Black, while paying lip-service to its back-in-the-day predecessor, is a much cobbier and tougher-looking bike. The old ones where a bit spindly and insectile. And I very much like the way these 21st century Bonneville variants strut their stuff. Maybe the old petrol tanks were a little sexier, but you squint a bit and these ones are just fine. I’m a fan of the entire T120 range. Triumph has really nailed it with this platform.

Over the pond, the Spirit Lake folks are also dealing with a great platform. The Scout Bobber is a far more modern-looking take on the Bobber concept. It’s a little awkward about the exhaust pipes, but bikes like these are always blank canvasses for people like me. Those stock headers would be off before I took delivery of it. There are some very nice aftermarket options out there for the Scout. 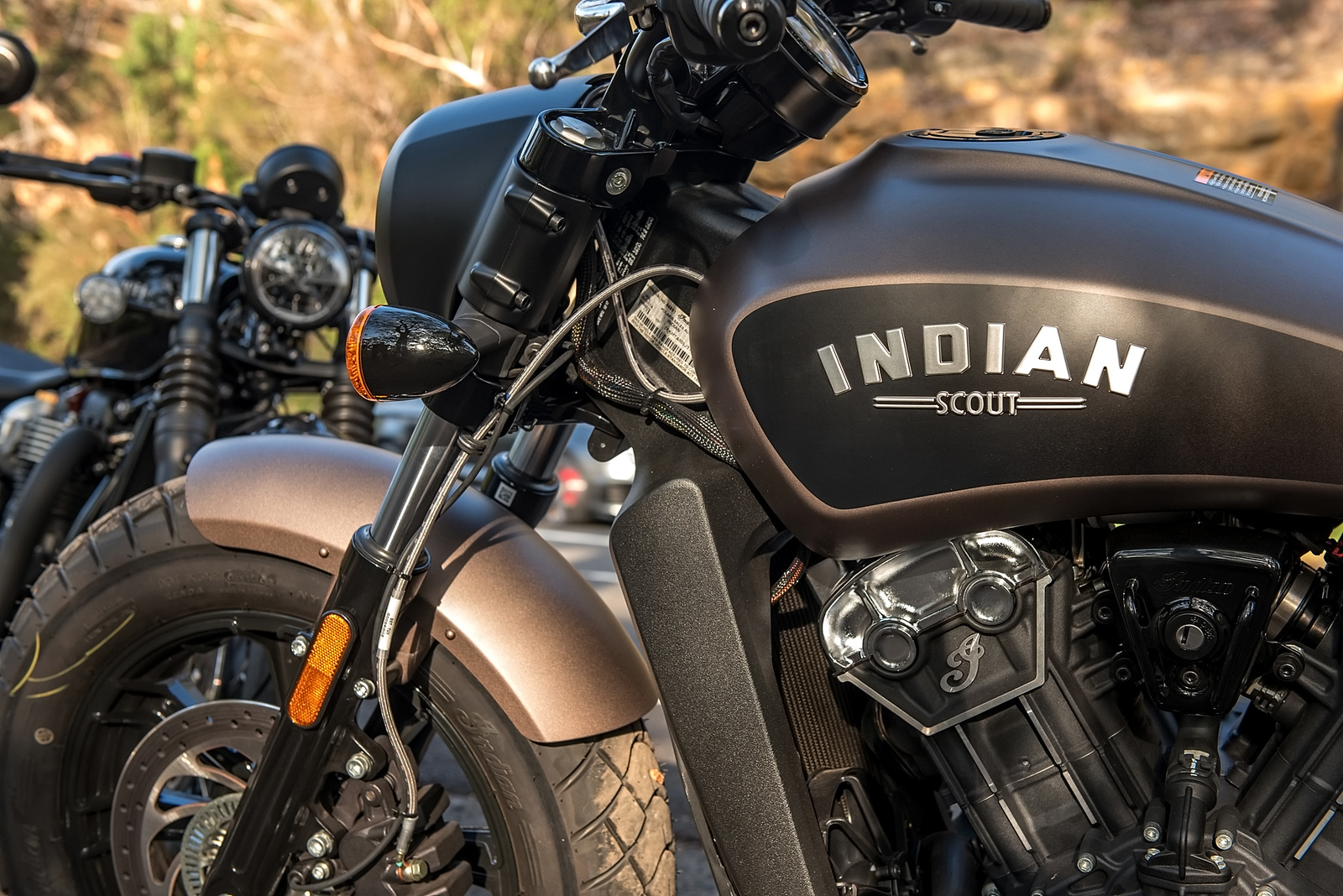 Stylistically, I very much prefer the Bobber to its Scout Daddy.

But would I choose the English over the American?

There were times when I loved the Triumph because it took me back to the days when I owned a 79 Tiger and took girls to wine bars because wine made their panties fall off. Objectively, the Bobber Black is a handsome, rugged-looking motorcycle. Of course you can never carry a pillion on one, but that is not always a negative.

But then there were days when the Indian sang to me – and it can carry a pillion. I loved its neo-hooligan lines, and the fact it pastes VRODs off the lights. When I looked at it, I saw a lot of potential in its bones, and I could visualise a long and happy customising vibe. Not so much this with the Triumph, which has sprung fully formed from the factory.

So the backyard bike-builder in me had a thing for the Indian.

Happily, this is not a decision I have to make. 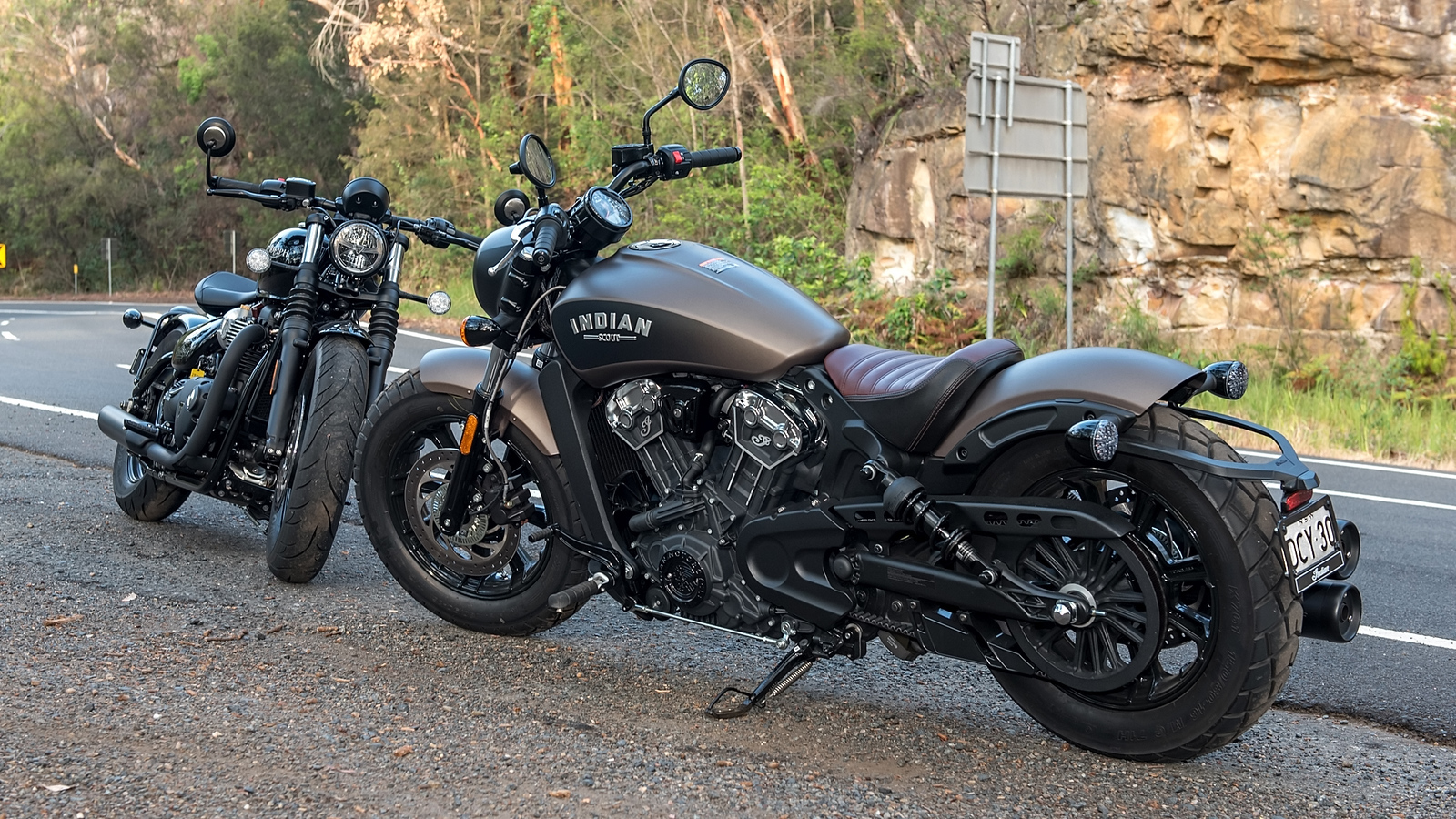 This is a decision you have to make if you’re inclined towards buying a Bobber.

And I’m not the boss of you.

You may view the Triumph Bobber Black’s full specs

You may view the Indian Scout Bobber’s full specs