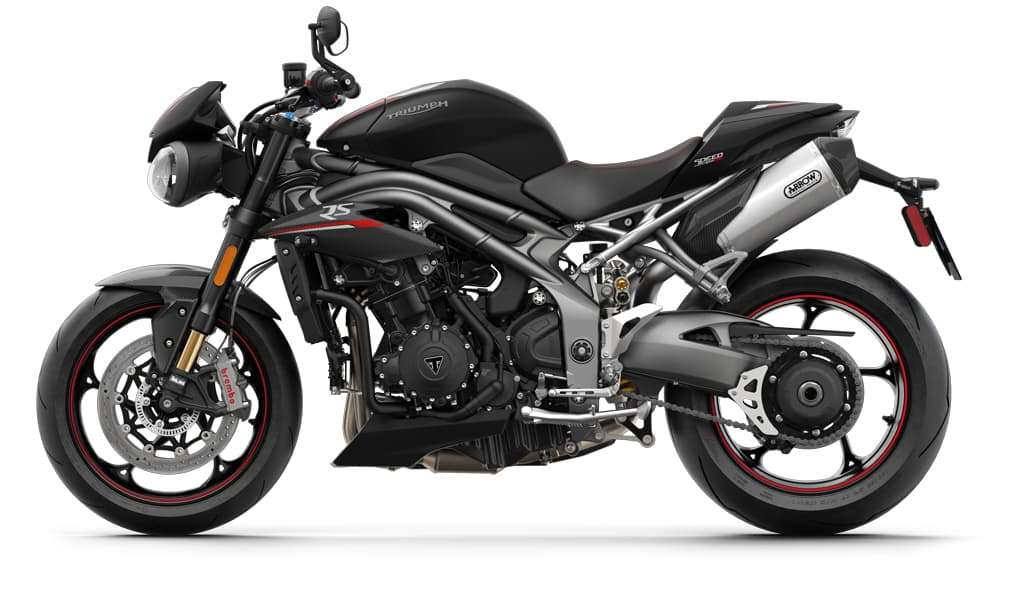 I’m a whole lot one-eyed about Speed Triples. I have owned four. I have loved them all with a passion. Even when one of them caught fire. When I bought the first twin-headlight model back in the 1800’s, I felt like I was an island. No-one but me seemed to appreciate it’s unique ya-built-in-ya-shed-dintcha? look.

I didn’t set any store with the whole “hooligan” descriptor. I try not to anthropomorphise motorcycles. But then I don’t need to write magazine cover-lines hoping some muppet will buy the tedious rubbish I’m pedalling.  Bikes are not hooligans or outlaws. The bastards who ride them, on the other hand…

Well, the Road Gods know just what kind of irredeemable bastardy I got up to on my various Speed Triples. The High Range PCA and Speed Dangerous (162 in an 80 zone, baby) is the one that really stands out. I got your hooligan right here, officer…

Anyway, that was a long time ago. I’m better now. Honest.

But those damn Triumph Speed Triples still sing to me. 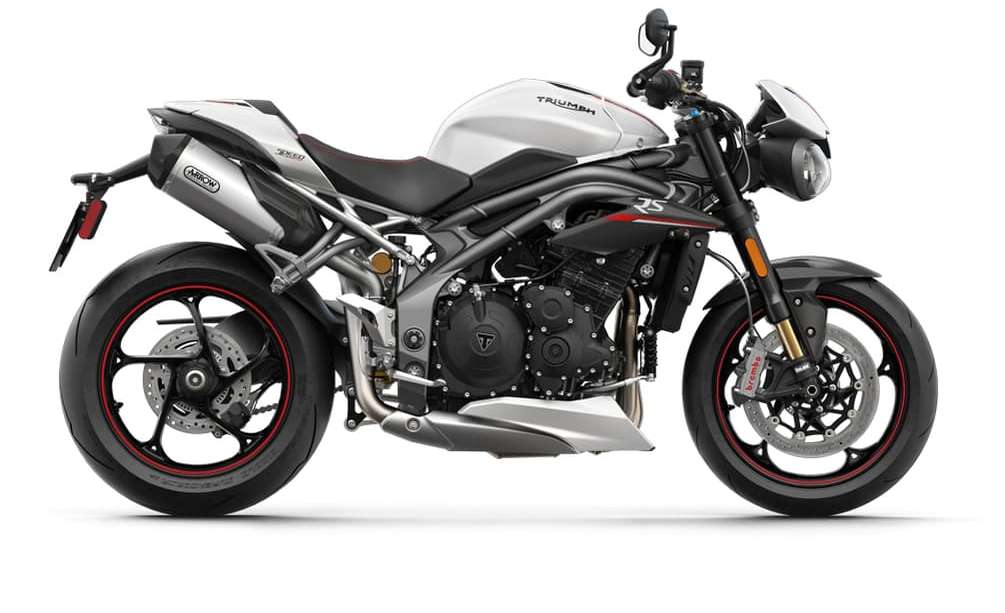 I now have mates who are now in the process of restoring older models. One of these mates lives locally. I can hear him screaming about sprag clutches late at night.

Triumph has, of course, kept developing and improving the Speed Triple since its inception in 1994. The sprag clutch issues have long since been dealt with, and this latest iteration is truly a superbly engineered and sophisticated weapon. It is more than able to hold its own among the brilliant bare-boned monsters from Austria, Germany, and Italy. Some of those monsters have more bang up top than the Englander, but not many of us ride our naked bikes at 270km/h all that much. Instead, the Speed Triple delivers a strong bottom-end and a Herculean mid-range so rich and sweet it’s like fairy floss. But since it’s not, what you get is a hell of a satisfying ride instead.

I spent a day hammering it around the Gold Coast hinterland and a day terrifying myself at Morgan Park Raceway. Still, I did get to see just how fast, hard and sassy the new Speed Triple can be made to go when someone like Garry McCoy is putting it to the lash. Lord, that man can bang. 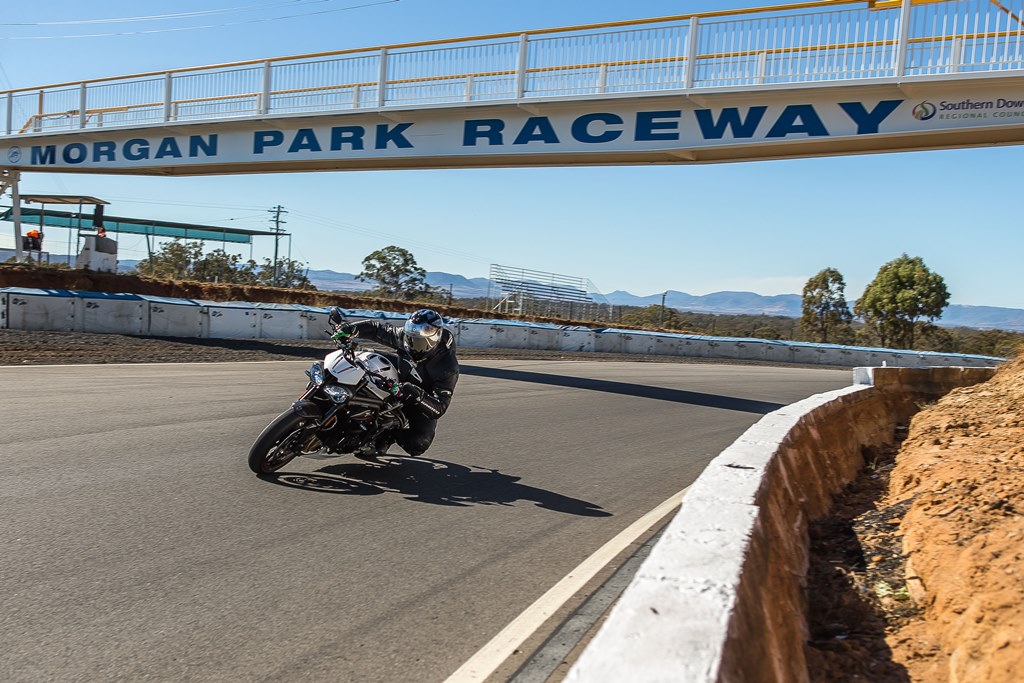 And to be perfectly honest, it hauled me around the delightful Morgan Park like a bloke with much bigger cags than the ones I normally sport. That says quite a bit for the confidence it inspires.

Triumph has decided to position the new Speed Triple at the fancy end of town. It’s not hard to guess who it’s aimed at. So at this end of the spectrum, electronics is king. You wanna play here, you better be able to offer a wondrous suite of CPU-driven whizzbangery, gleaming Nordic suspension and a sense of great build quality.

The Speed Triple does not disappoint. It’s far and away the best Speedy ever made.

This is how Triumph made it so… 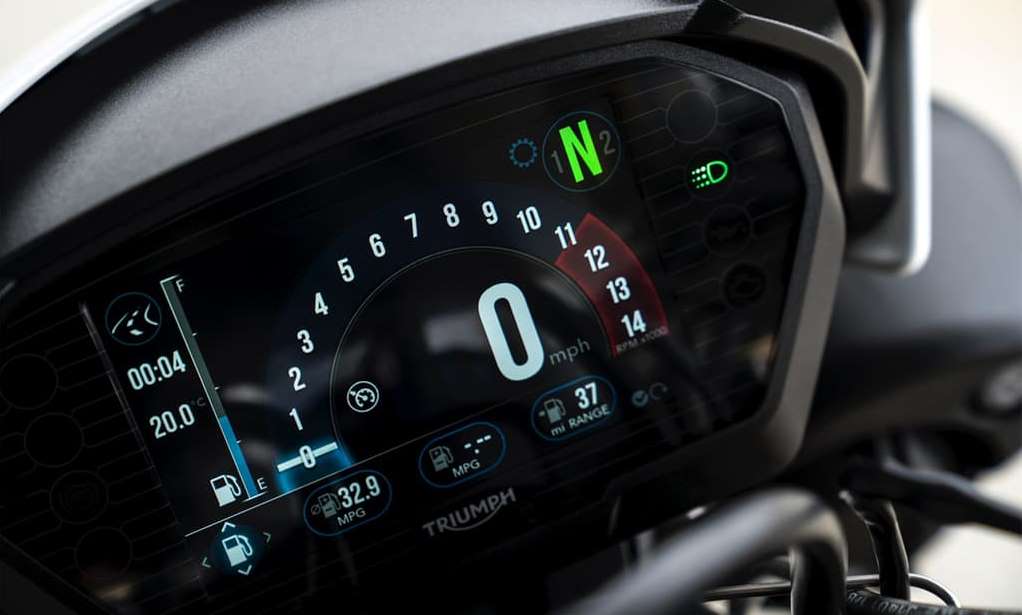 Where there were four computer brains, now there are seven. They display their deliberations on a superb five-inch TFT colour screen (same as the new Tiger and the 765) – and this display can be buttoned into three variations (one which looks really trippy, one which is all tacho, and one which is a more traditional array), while the TFT screen itself can be tilted up or down by hand.

There’s a bunch of riding modes, including one which can be entirely customised to your evil late-night aspirations. Throttle response, traction control and ABS intrusion (or non-intrusion) can be jimmied, and you get a lap-timer to measure your kung-fu with. 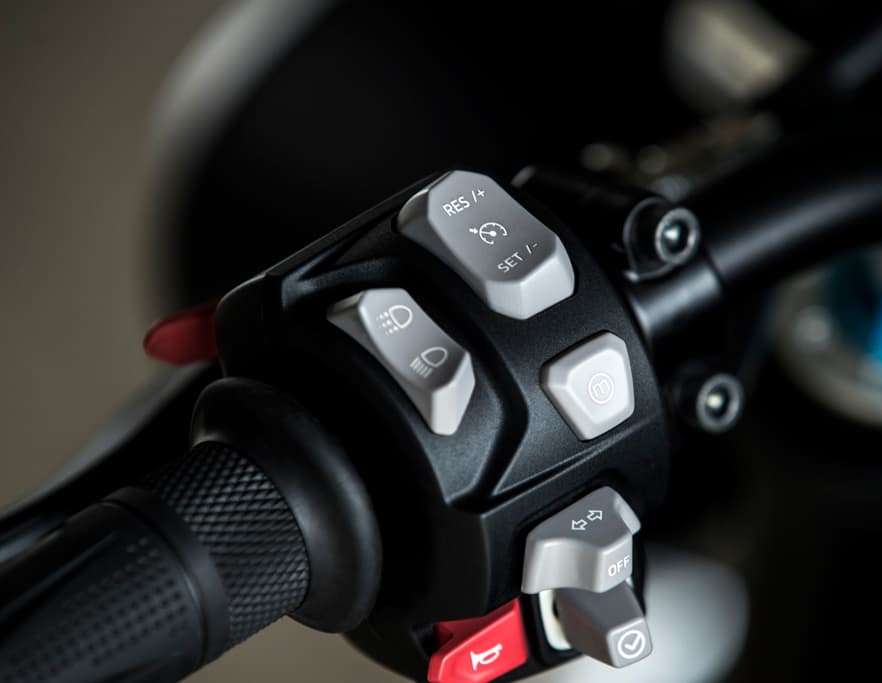 The left-hand switchblock deals with your commands in this regard. Don’t worry, if a dinosaur like me can navigate his way through this, you’ll be fine. It’s not the most intuitive system, but it’s a long way from some of the maddening teno-buggery on offer elsewre.

Only Rain Mode hauls you down to 100bhp. All the other modes provide the full 148 mules; they just vary the throttle response.

The traction control (yes, it is lean-angle sensitive) and ABS is from Continental, and it’s very, very good. 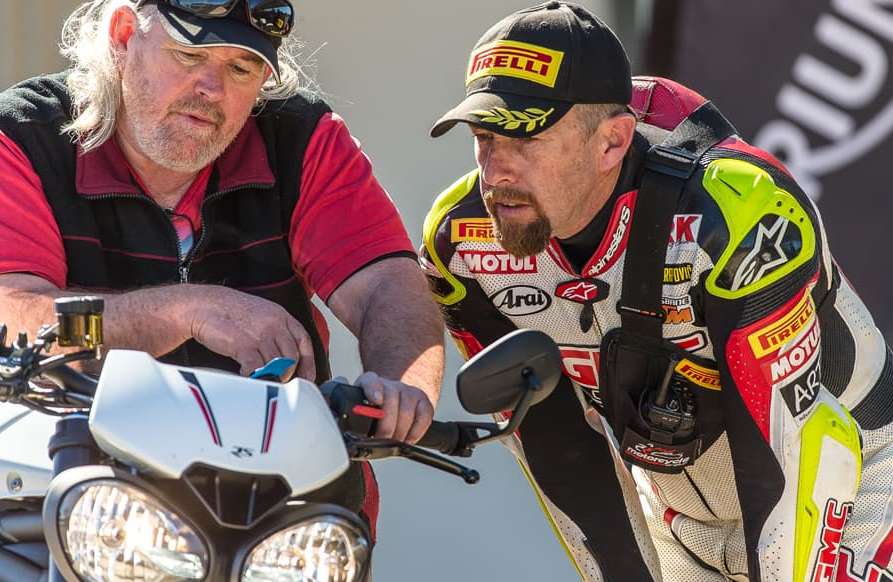 Hedgie from MCNews, wheelied the bubbles out of his, and waxed lyrical about how the system wasn’t killing off drive while keeping the front wheel lofted. I was tempted to give a it a whirl, but the thought of Garry McCoy falling off in hysterics and ruining everyone’s track-time kept me grounded. Still, I did see a few of the faster boys overcook themselves off the track, but they all kept it upright – a testament to both the Triple’s forgiving nature and their own skill.

Me? Hell, I didn’t even come close to dying. I pushed as hard as my broken internal rubbish allowed, and was rewarded by fast and sure tip-ins, rock solid lines, and hammer-hard power out of the corners. 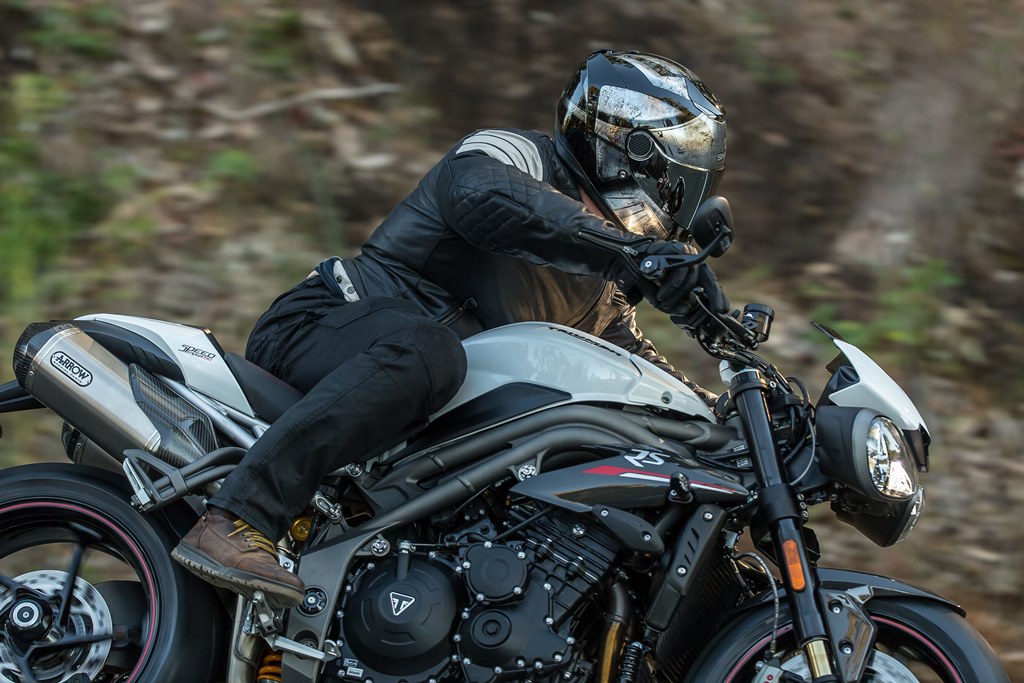 The Speed Triple’s new-found mid-range stomp is glorious. That three-horned motor (up in compression from 12.25:1 to 12.92:1), has always been exceptional in its power delivery and sound, and never more so than it is today. It’s more refined, more powerful and compellingly smoother than its predecessor – especially when you’re holding lower gears all the way to redline.

The end of each track session left me more and more impressed with the current incarnation. I’d come in, look at the sexily feathered, super-heated Diablo Supercorsas, compare them to the horribly melted rubber donuts on Garry McCoy’s bike, and give a silent thanks that even muppets like me could pretend to bang on a bike like this.

Two or so years ago, the Speed Triple was not quite at the level of its bloodcurdling opposition. It is now. 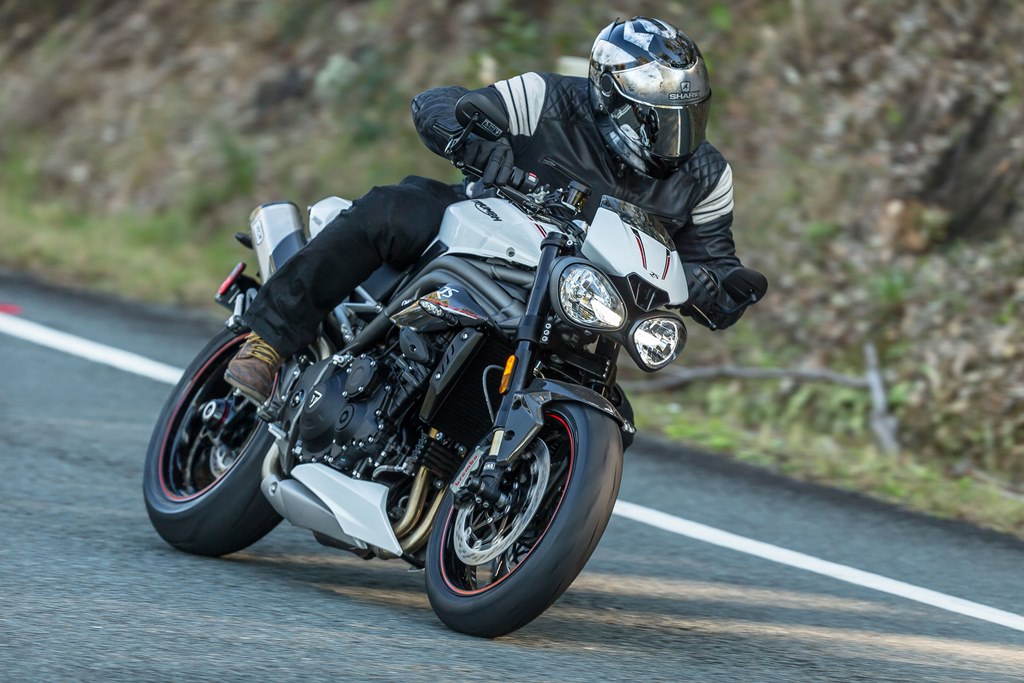 The British battler has a swish new suit, gleaming new knuckledusters and he’s ready to crack some heads from over the other side of the Channel. He’s now a trim 189kg dry, and his surprisingly comfy and very schmick-looking seat (I love red-stitching on black – it reminds me of strippers’ panties) sits a mere 825mm off the ground.

Öhlins bouncers from the fancy part of the catalogue are standard – a TTX36 up the back with fully-sexualised 43mm NIX30s in the triple trees.

A brand new, upgraded gearbox is mated to a great power-shifter (yes, up and down), but it’s one of the few things not standard on the bike. It’s $553.65. You’d be mad not to get it. 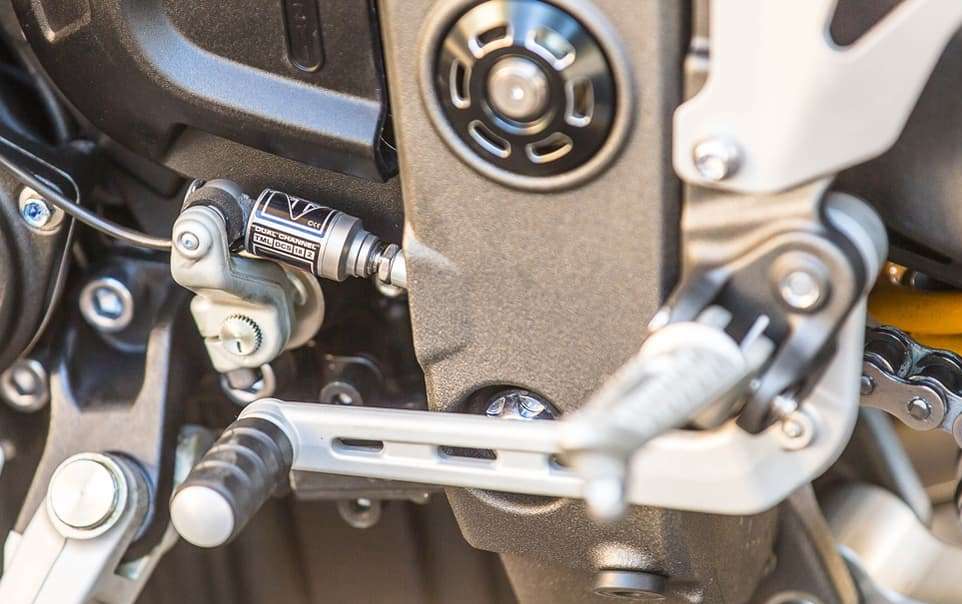 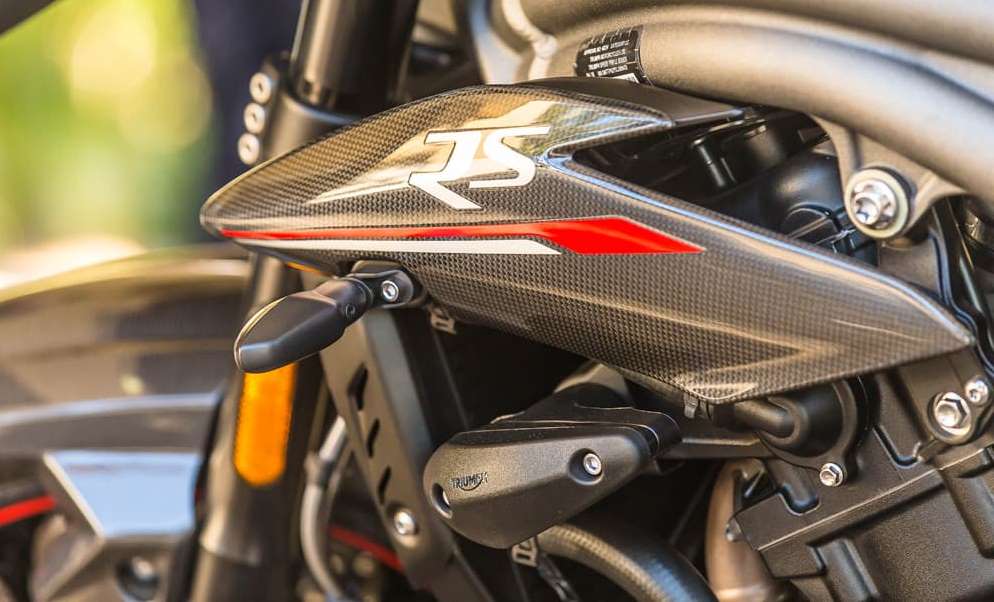 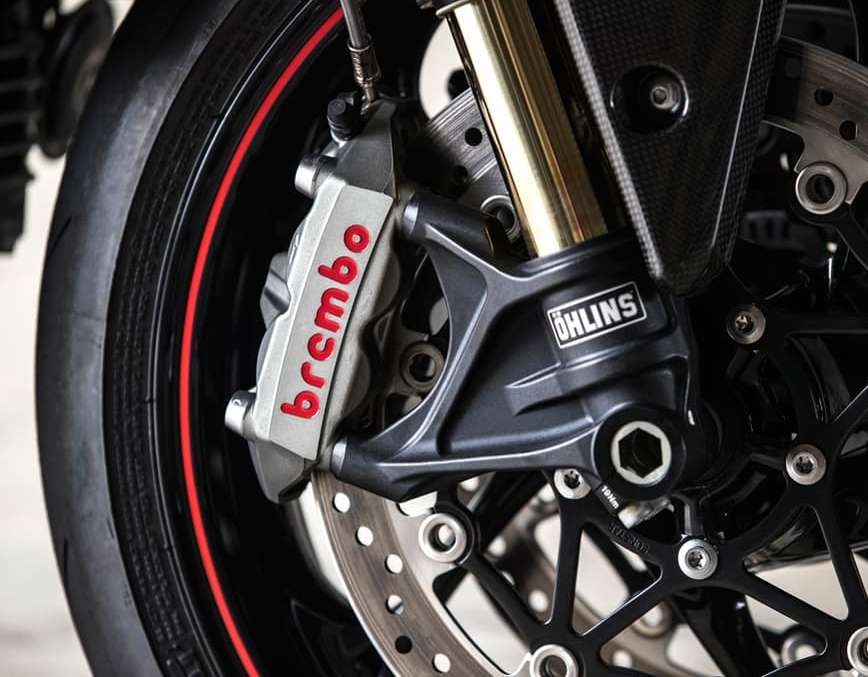 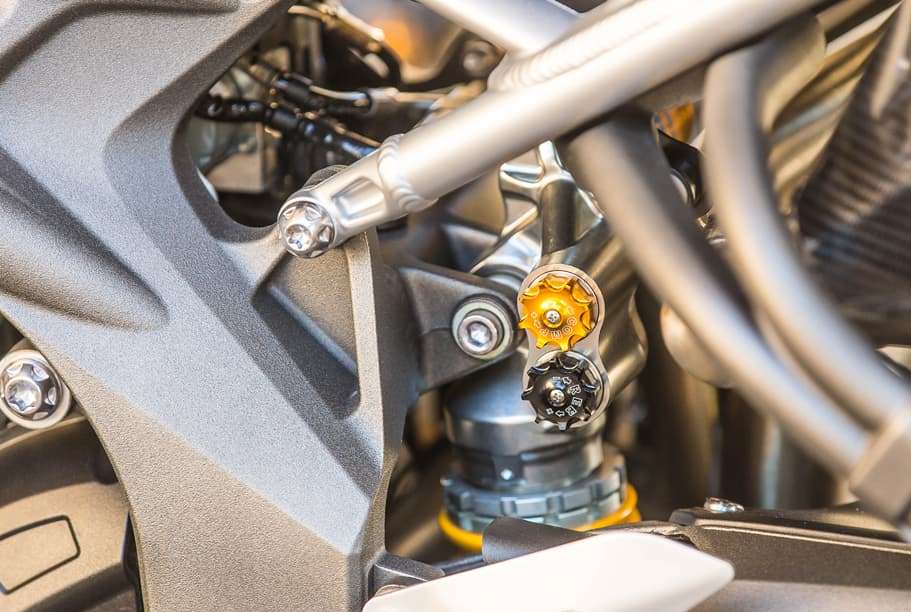 The Brembos Brembo-ed as Brembos do, the adjustable levers are a work of art, and the brake lever has this knurled knob which adjusts the front brake for…well, bite and feel, I guess. Dial it all the way to 21 and it’s hell-firm and very bitey.

But this was the one area of the bike where I was not completely gobsmacked. I found I had to pump the front brake once or twice to get it pressurised if I hadn’t used it for a bit – this was mainly on the road, not so much on the track where I was using the brake a lot. It was weird. Some of the bikes did this. Others did not. Don’t get me wrong. It’s not that the brakes didn’t work. They were great. It’s just that sometimes I could pull the front lever in further than I thought I should be able to. It had no effect on the performance of the brake. So, yeah, weird. Did it prevent me from swooping around Morgan Park like a fat, leathery hunting hawk? Not at all. I’m just telling you what the front brake felt like. 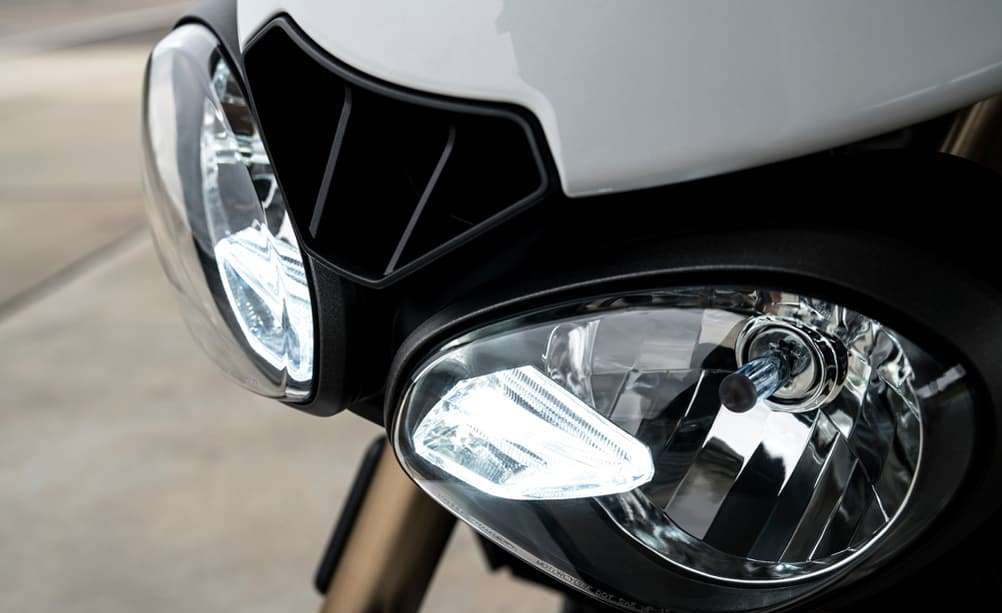 The styling has remained true to its punch-in-the-mouth predecessors. I think the upswept pipes have had their day in the sun, but the rest of the 2018 Speed Triple looks just as edgy, mean and nasty as its fans want it to.

And it’s now in the best shape of its life in terms of feel, performance and rideability.

Of course I’m still a fan.

How could I not be?

WHAT COLOURS? Black or white 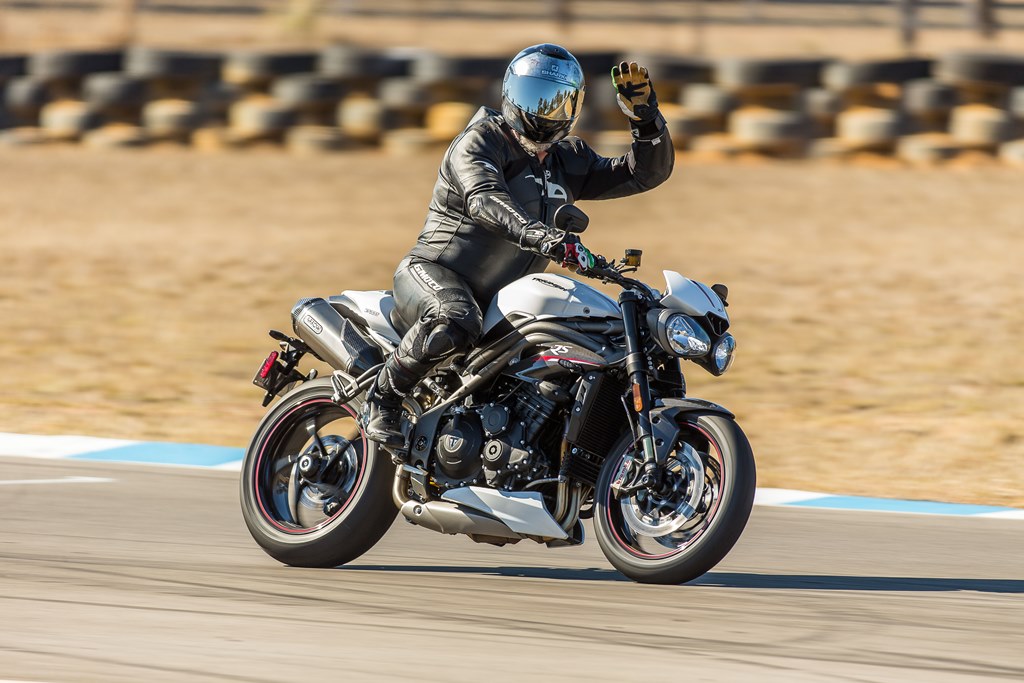