There’s nothing like a fat-bottomed, sass-filled cruiser being hurled hard into a sharp corner to make you feel alive. Brembos are for pantywaists too terrified of terror to embrace terror like they should.

There’s nothing wrong with the Tokicos on the M109R. They’re perfectly suited for this purpose. And heaps less wooden-feeling than they were when the Boulevard first came to town in 2006.

I loved it then, and I love it now.

That satisfying graunch as you sit it on its undercarriage, the shower of quality alloy hitting whoever is dumb enough to be behind you in the face, the life-affirming squirm of that huge German-bondage sex-rubber keeping you on the road… and then the great gut-churning gronk-torque that digs in and chucks you out of the corner…that is the stuff of life, comrades! 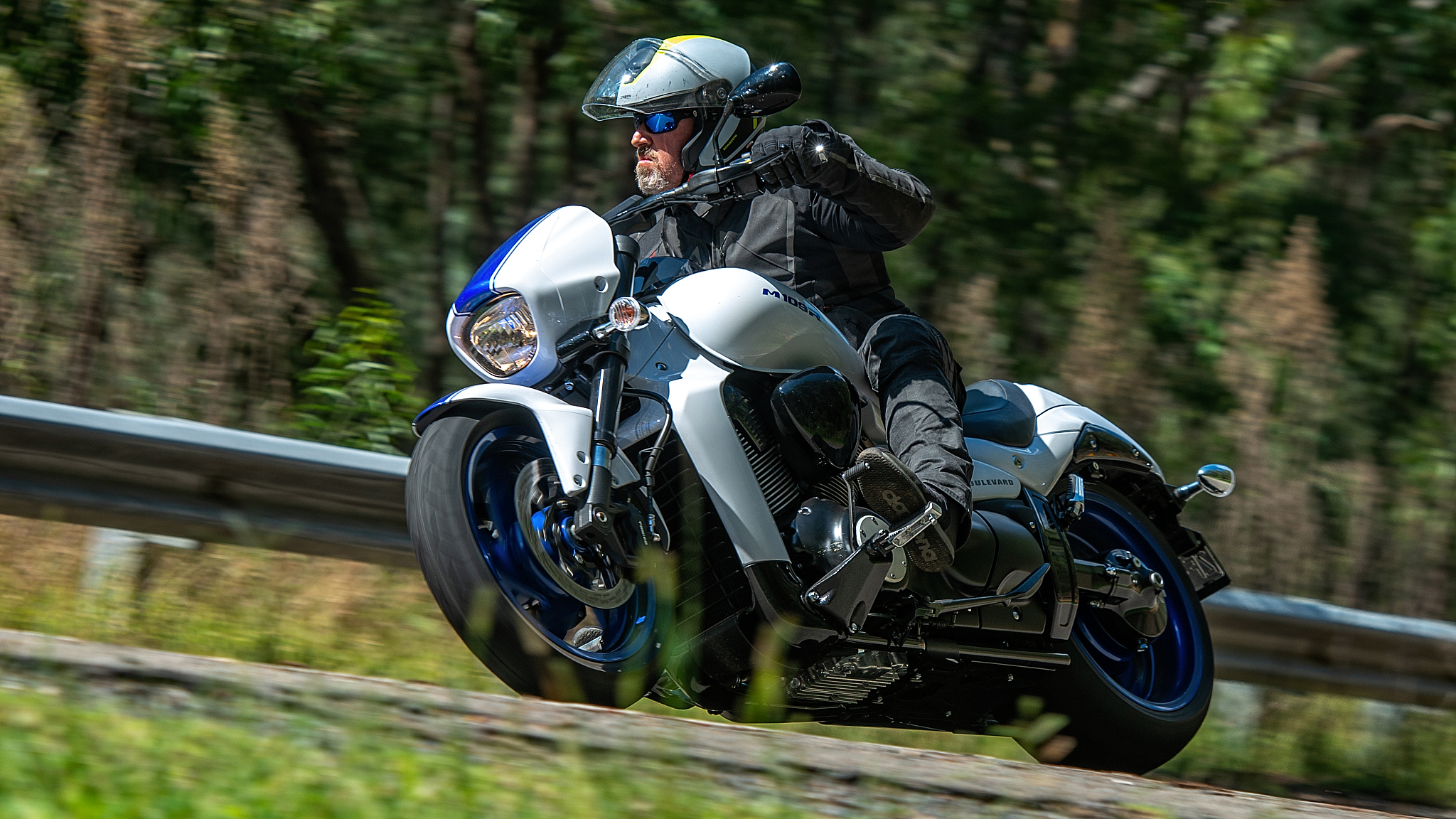 More than 3500 Australians have embraced the M109R since Suzuki first gifted it to the world. It’s probably true some of them haven’t embraced it as I have embraced it and ground splendid chunks of it off on too many corners to count, but a lot have.

The M109R a bit of a cult bike. Suzuki does have some success in this area. It regularly builds bikes which quickly attain a David Koresh-like following – the Hayabusa, the V-Strom, the Katana, the GSX-R, the Bandit 1200, the DR, even that terrifying TLR it built way back in 1998 has its adherents.

I think the Boulevard’s success in this area is obvious.

It’s got a monster V-twin engine – one of the most gut-belting V-twins on earth with 92kw of horse and 160Nm of Newton (3200rpm no less). And it’s a shaft-drive – which is simply a stroke of genius in this motorcycle niche. Like, why would you NOT put a shaft on a big cruiser like this? 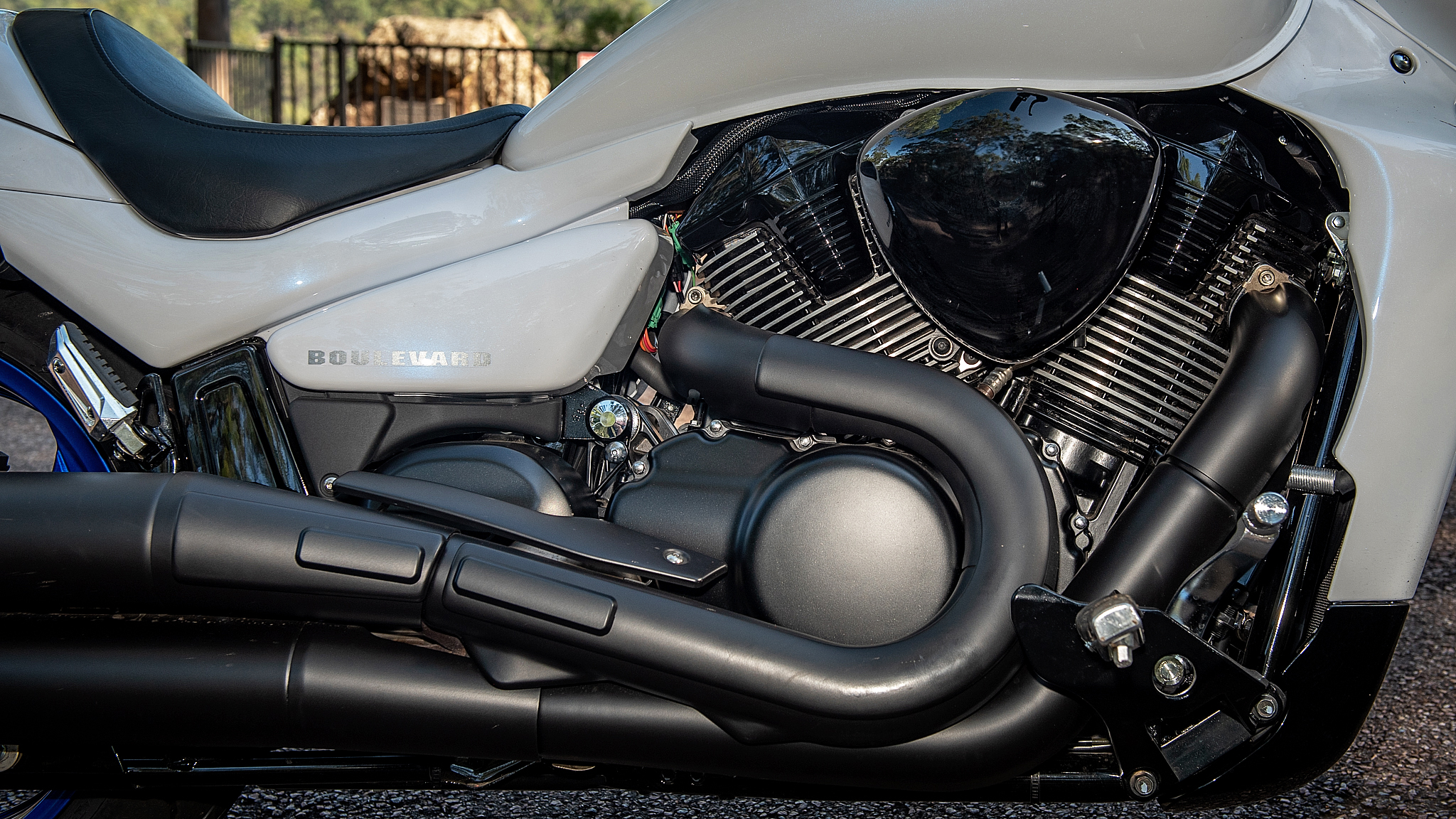 Then there’s the low seat height (705mm), and the relative comfort on long hauls. Ergonomically, it’s actually one of the better feet-forward tourers. The seat is wide and supportive and seemingly made for man-sized men.

It’s a combo that’s very satisfying to ride. The gearbox is solid – gone are the second-gear issues of long ago – the clutch is smooth and robust, and the throttle response via Suzuki’s Dual Throttle Valve (SDTV) delivery is very good. It oomphs precisely when you need it to oomph.

You can adjust the KYB rear for pre-load, but I was OK on the stock setting. You bigger chiefs may seek other arrangements. Or you may not. It’s not like most of us know dick about suspension anyway.

Stick a pipe on it if the deep, muted thunder-rumble is not enough for you, or you wanna shed some weight thinking it will make a difference. Wallow in the torque. Send sparks in your wake. Ride fat and happy.

And then, of course, there is that iconic styling.

It cannot be mistaken for anything other than what it is.

The flowing, almost organic lines, that neat headlight surround, that impossibly fat rear-tyre, and its sheer presence, is unique to it alone.

Suzuki has painted the Boulevard all sorts of colours over the years, but the Ford Cobra homage it has going here is simply so in-your-face, a suitably irreverent man could well be swayed from my former adoration of the black-and-yellow incarnation.

And this is the Black Edition. The Yanks call it the B.O.S.S., which I’m guessing stands for ‘Big ’Ol Sexy Suzuki’, and I get that, because blacking out the motor (or anything) always makes for more sexy.

It comes in two colours this year. This amazing white with the blue stripes, and a black-and-red version, which is far more subtle…and therefore yuck in my mind. 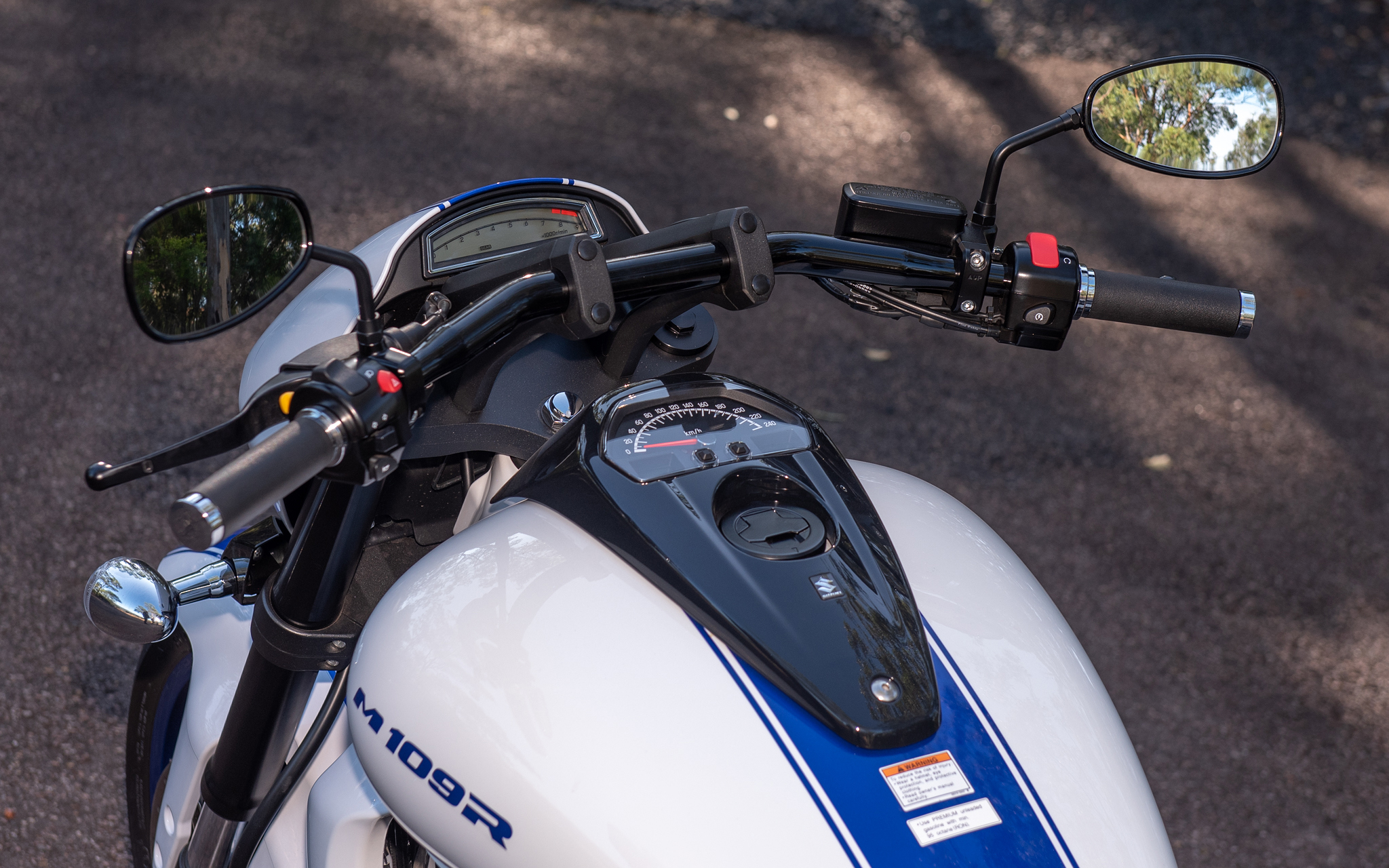 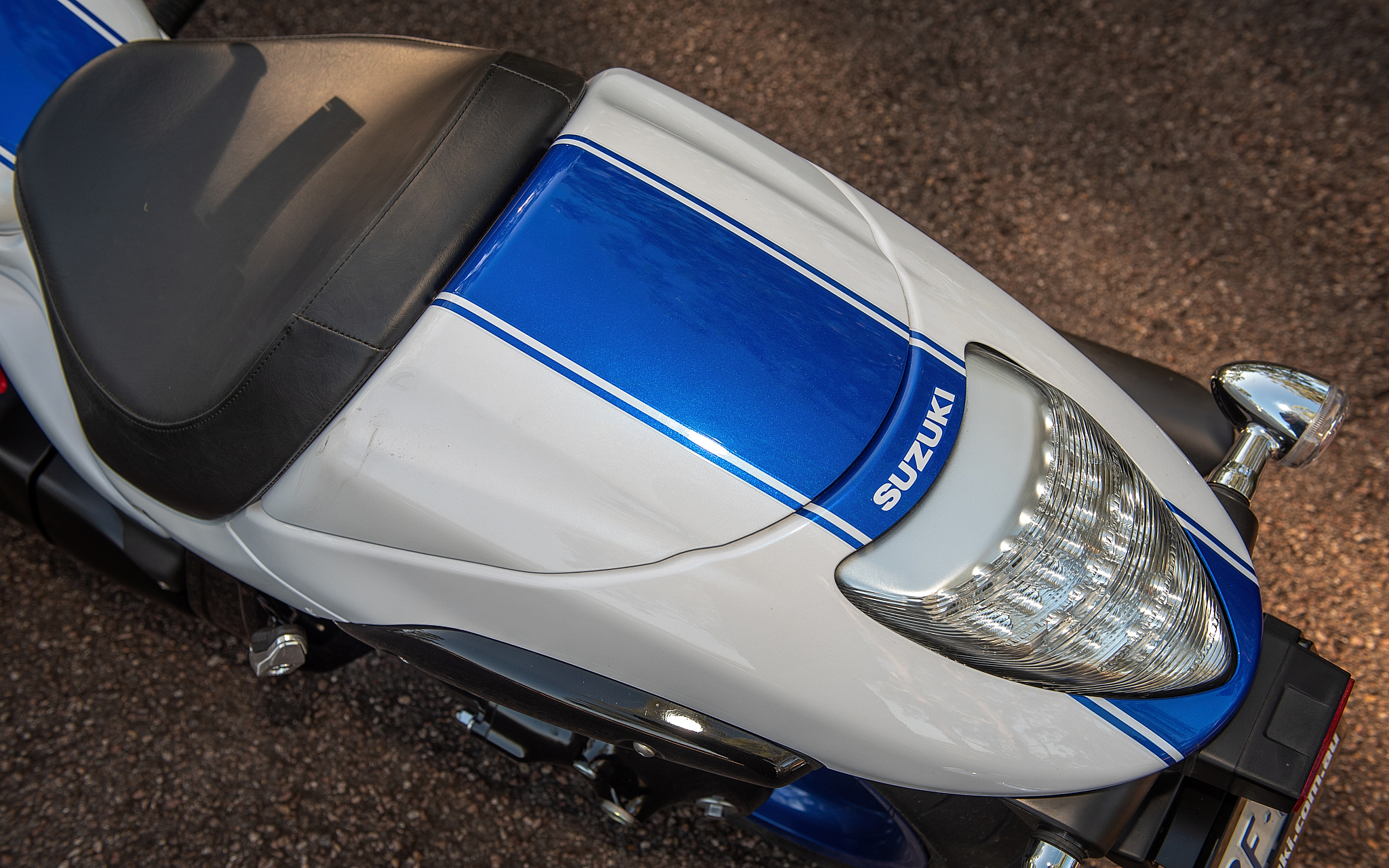 You stick that Great White GT-striped Polar Bear in the sun and it’s simply…Chernobyl. But in a good way.

And remember, black is slimming. White is the opposite. You only gotta look at the brave ladies rocking skin-tight white jeans to know the truth of this. I reckon the Boulevard looks even bigger and beastier in white.

Technically, nothing has changed from the previous incarnation. And why should it? The Boulevard doesn’t need multiple engine maps, lean-angle sensors (that’s what that grinding noise is, Cynthia!), switchable ABS and the rest of those tech-upgrades.

And because Suzuki clearly loves you and wants you to be happy on a Boulevard, it’s being offered at a very good price. Give the salesman $18,990 and you can ride off on one. Make him give you something else, like some gloves or a lid, or even a hug and a bit of a nuzzle (time are tough, carpe diem), but for under 19K, you’re getting a lot of bike.

I know it sounds like a cliché to say that. But it’s actually completely true. You are getting a whole lotta Rosie for that money.

Go on, bang a fatty around the place. Put a smile upon your face. 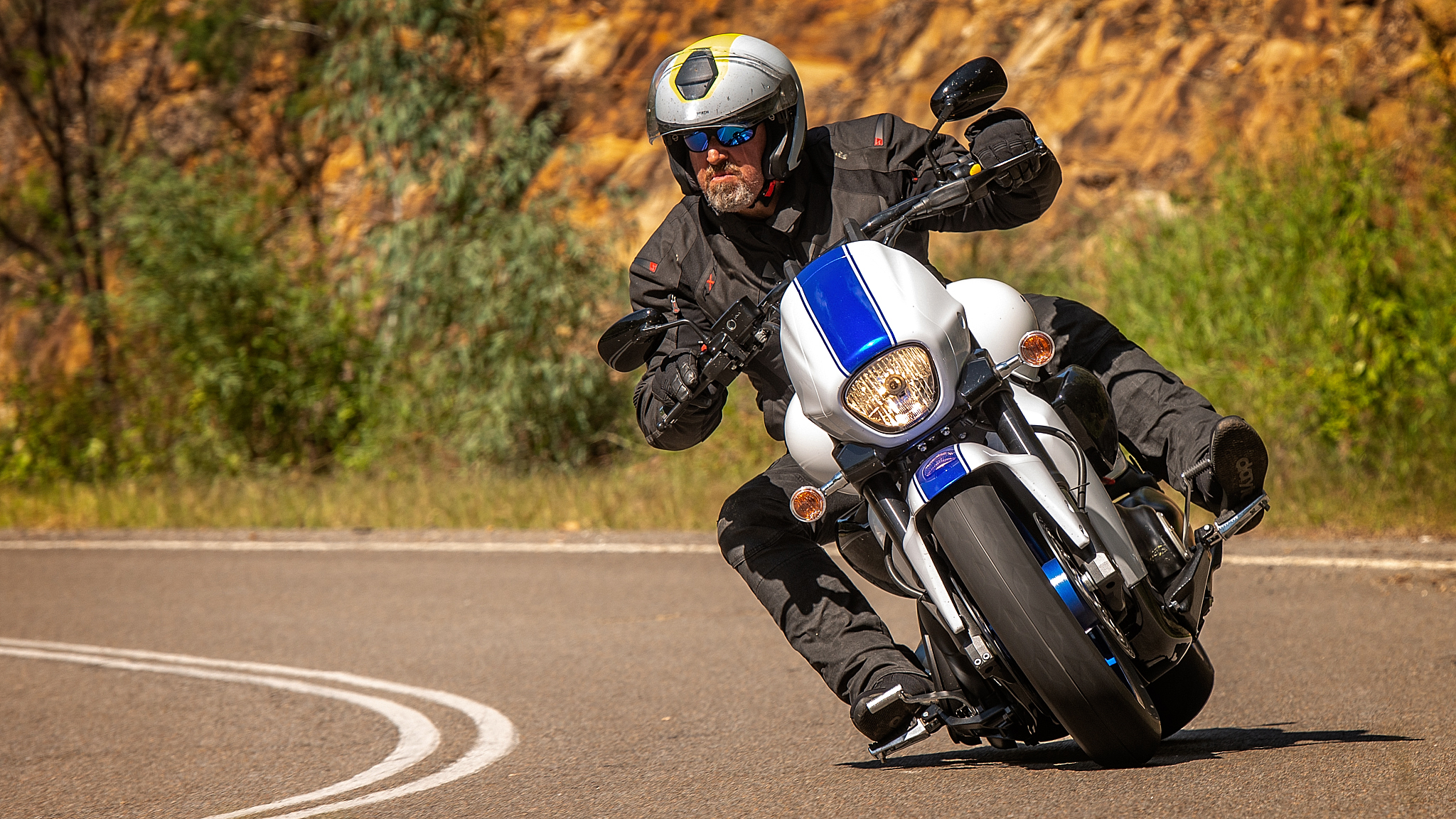