“No one ever approaches perfection except by stealth, and unknown to themselves.”

Ducati’s Monster has occupied the top of the naked category for more than 25 years for very good reason, and this 821cc iteration only cements its place up there. Delightfully eager and potent motor, superb handling, good suspension and brakes, a fully hectic up-and-down quickshifter, and at long last, a riding position that doesn’t affront the turkey neck and dumplings. It looks great, rides sweet, has all the electronics you’d ever need, and painted in war-black, makes the girls go: “Oooh…”

Corner after corner, bend after bed, the Oxley Highway is relentless in its demands. And thus, it is glorious.

The day I rode it on the Monster Stealth, it was hot, and there were bushfires burning around me. In fact, the Monster and I were the last Ducati down the Oxley before it was closed – and yet I just wanted to keep on keepin’ on. Corner after corner, bend after bend, the Monster delivered me through, exalted me in, and delighted me out of each and every one of them.

I gelled with it. This is no small thing for me. I ride a lot of very different bikes, and while I can critique them all and understand what niche they serve, it’s not often I actually find a bike I’m good on and with from the get-go.

This melding, if you will, occurs on several levels. 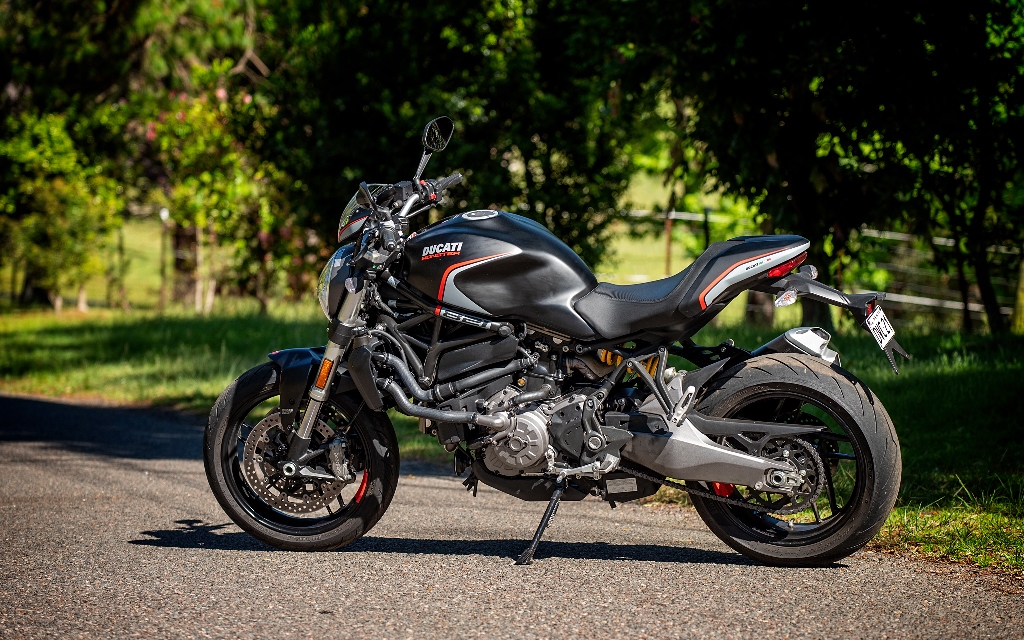 First, I have to love the way it looks. The clenched-fist, hunched-forward stance of the Monster ticked that box hard. The paint then kicked it up a notch.

I have to be comfortable on it – both at dawdle speeds and at “Look! Daddy’s trying!” speeds. Another tick right there. I’m happy commuting or banging out a 1000-km day on the Monster.

Thirdly, it needs to handle in a forgiving manner. Let me explain. Some people are happy to jam their twitchy, 200-horsepower sportsbike into a corner with the back tyre skipping on the tar and the front kissing the razor-edge of disaster.

They do this on purpose and I salute them. When I do that coming into a corner, it ain’t on purpose, so I rely on the bike’s integrity to bail me out when I’m in over my head. The Monster is handling integrity incarnate. Big tick on a big box. 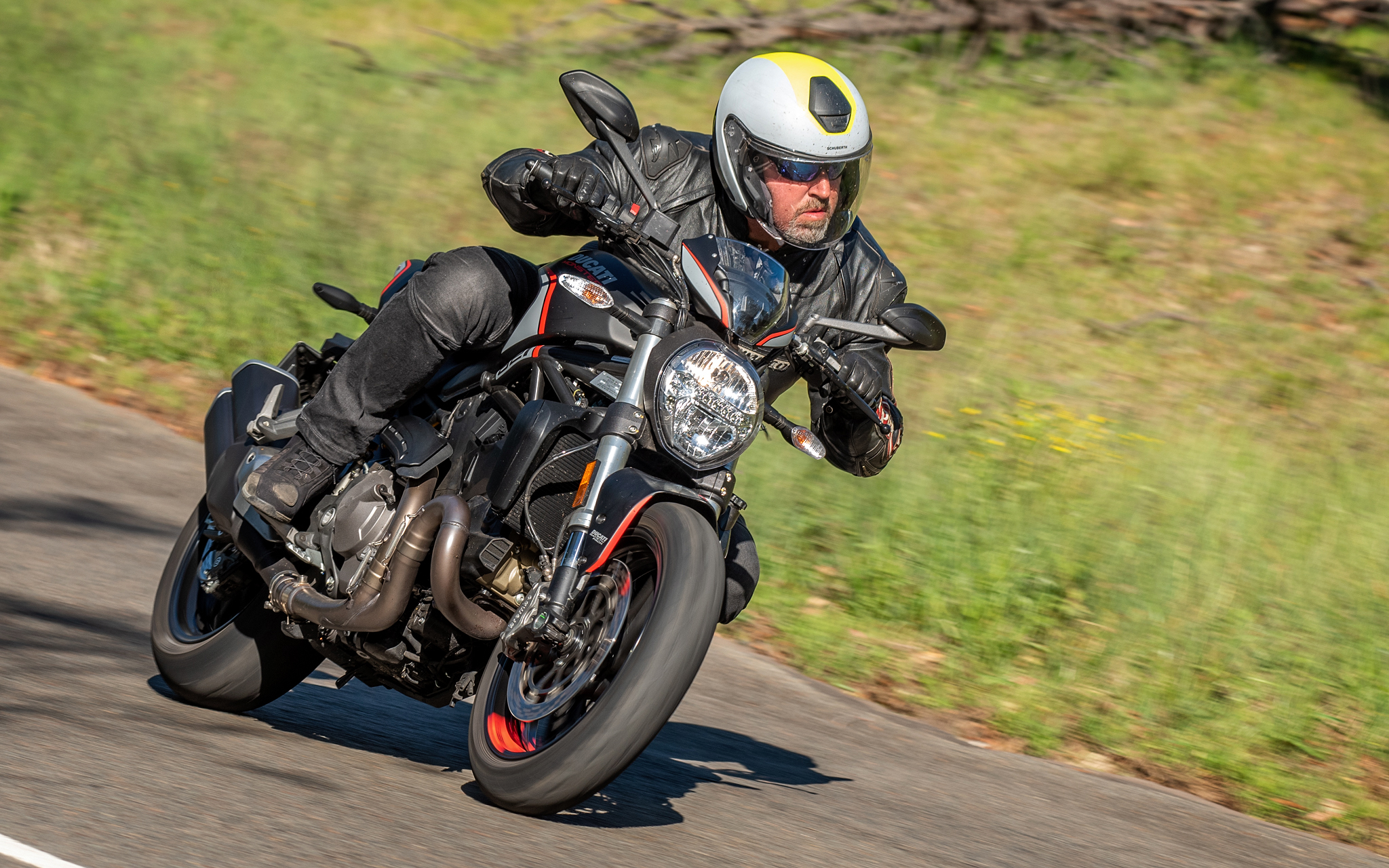 And lastly, but most importantly, it has to hit me in the feels. The Monster nails my feels like the Romans nailed Druids – hard, high and handsome. I felt ‘right’ riding it, and I looked good riding it – and if more girls wore panties, I would have been drowning in them.

And to think I was once not in love with the Monster at all.

You see, a few years back, I rode a Monster up Thunderbolt’s Way and down the Oxley Highway – much as I was doing that weekend. And while it handled superbly, the canted-forward seat inflicted cruelties upon my ageing (but still puissant) manhood. No-one can focus upon the carving of corners if one’s tenderloins are being mashed into the petrol tank. Yet one must focus or one will crash and burn, and therein lay the problem I had with the old Monster.

I have no such problems with this new Monster.

One of the bigger-fruited Italians in the design department must have figured enough was enough and sorted the seat issue. In doing so, he made the Monster one of the most comfortable bikes on the market. The whole nestled, sit-in position was now a work of sublime purpose.

By any measure, my ride was a full and proper test of any motorcycle. Up Thunderbolt’s Way and down the Oxley to Port Macquarie and back again. This is a 1000-km ride with a billion of the finest corners Australia can dish up. If you haven’t worked a bike out by the end of it, you’re not trying.

I could do no less on the Monster. The Stealth model of course, which is the best-looking Monster in the range as far as I’m concerned. 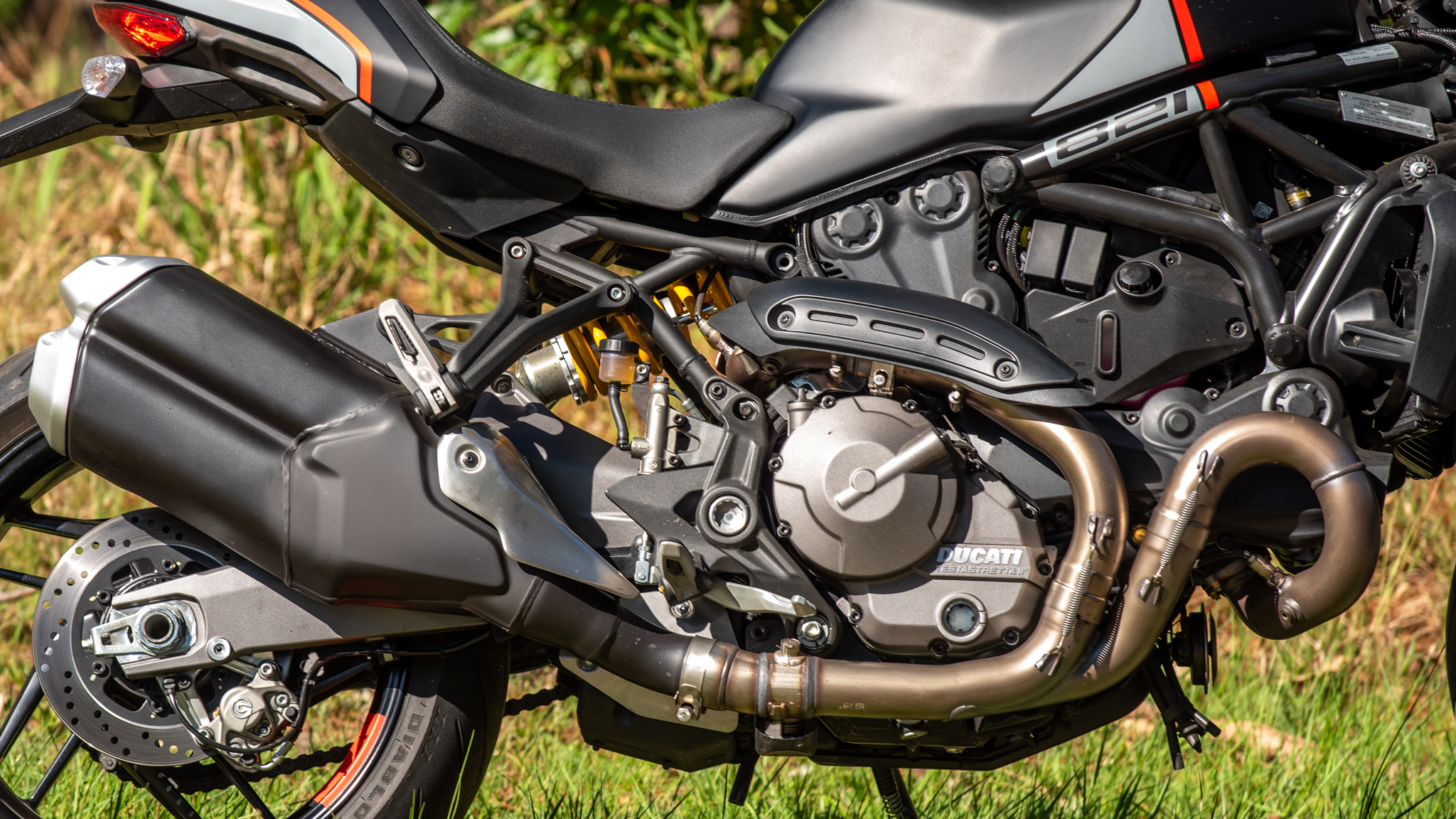 A grim, matte-black paint-job, evocatively highlighted with touches of light black and lipstick-red in strategic places (including on the wheels!) just makes the Stealth a little more special than its red brother. Let us not even speak of the yellow version, for we are not snake-hipped Andalusian waiters seeking to impress rich girls with lemony colours of happiness. There are no yellow monsters in the story books. And in any case, yellow is discontinued for 2020, so we need not even stress about it.

So only black ones and red ones.

The little headlight cowl, the rear seat cowl, and that killer quickshifter are the only differences between the Stealth and the not-Stealth – otherwise it’s the same brilliant 109-horse, 86-Nm engine, low seat-height (785mm), and a handling pedigree second to none. You know if Ducati ever built a bike that didn’t handle, the government would send tanks into Bologna and haul Brother Domenicali off in chains, don’t you?

It’s also not news Ducati has the whole naked bike thing down pat.

Visually, this is no mean feat. The engine, as brilliant as it might be, is no feast for the eyes. The designers perform some rather clever tricks to pull your eye away from it. They dunk the whole thing in black paint that eats light, and use the trellis frame and the sinuous rams-horn curve of the pipes as a focal point. In the Stealth’s case, your eye is also drawn to the bike’s almost perfect soft-edged angles by the use of red paint – like when a centrefold paints her interesting bits in carnal hues.

For me, it’s a visual masterwork.

I thought I would miss the extra oomph the 1200 version offers. And maybe if I was in my 20s and convinced, I was possessed of riding skills I didn’t actually have, that may have been the case. But not for a second did I wish for more punch on the Stealth. Let’s face it, 180kg dry-weight is perfectly paired with the power and torque the 821 offers you. It will not overwhelm like the 1200 might, and it will not gasp for breath like the LAM version. It is just right – like that bowl of porridge Goldilocks got into trouble over. 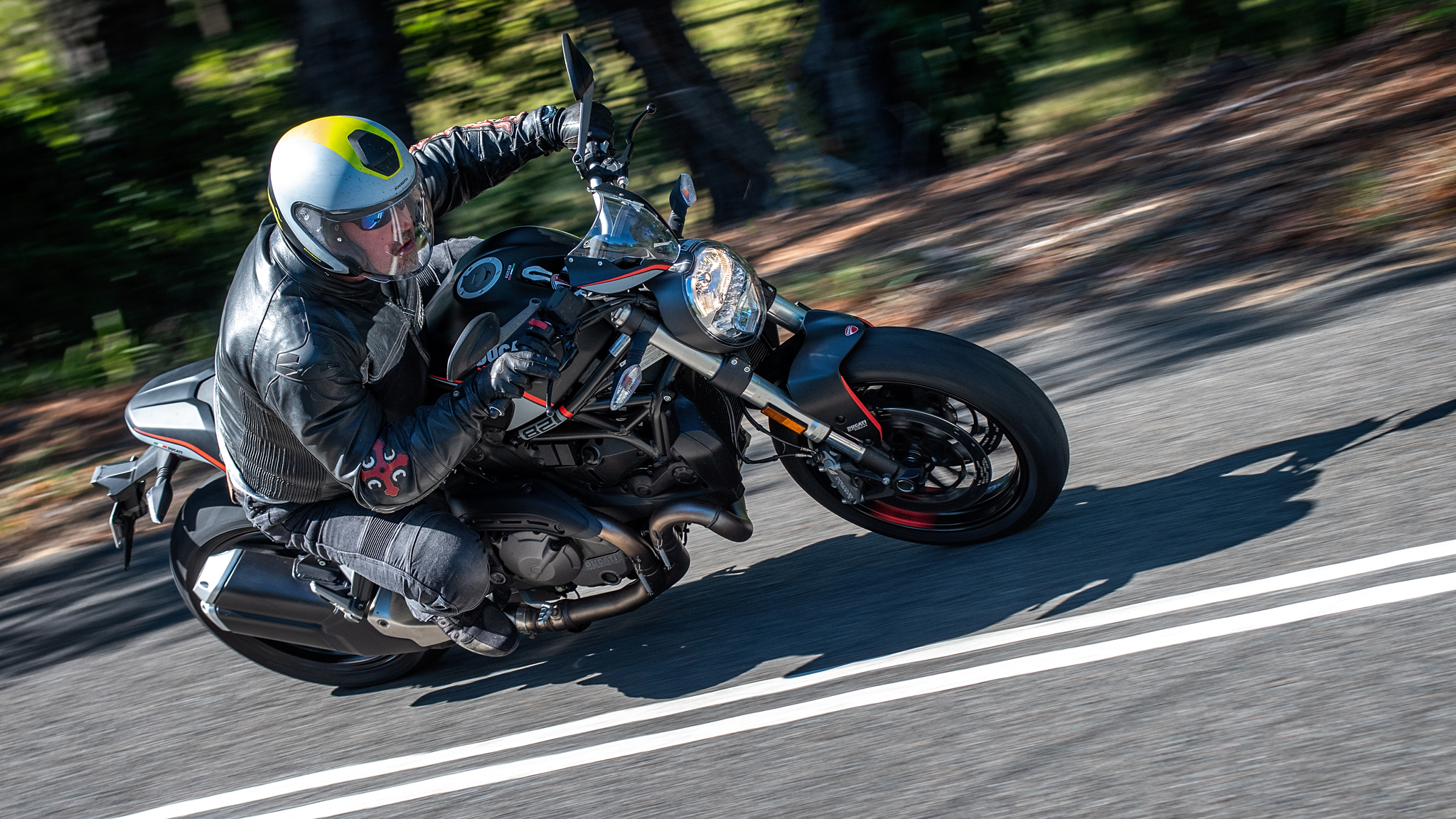 You see, the true joy of the Monster 821 lies in its ability to corner. It will carry corner speeds that will cream your eggs, offer you feel and power during your ham-handed braking capers, and grip the road surface with the tenacity and assurance very few bikes besides Ducati can offer. And Pirelli Diablo Rosso III hoops are there to assist you.

This is how it went for me.

I climbed the range on Thunderbolts Way with intent. My old mate, Horst, was chasing me on his freaky SP1, so I had to apply myself and so I did.

The early part of the road just as you turn off out of Barrington is a smooth racetrack. It combines breathtaking elevational changes and a heap of fast 55-65 kay corners. The Monster was happy to do a bit more than twice the advisory limit through them.

Earlier on, its non-Öhlins suspension was sorely tested via the rubbish that passes for a road surface between Gresford and Bucketts Way. But in all honesty, nothing threw it off its line. I’ve ridden that road with Öhlins-equipped bikes and they struggle as well. The standard fully-adjustable bouncers are more than up to anything thrown at them – except maybe jumping rivers.

Once you’ve made your way to the top of the range along Thunderbolts, you’ve left the smooth stuff behind and you’ll come across some nasty bits of dimpled bitumen. The Monster encouraged me to push harder. I pushed. It cornered. Even in places where I was dry-mouthed with fright, the Monster was completely unfussed.

But when the red work started, and the 35- and 25-kay bends began their relentless demands, then the Monster and I raised the black flag and went at it. Its torque, which is served in thick, creamy geysers from everywhere in the rev range, means you spend a lot of time snicking between third and fourth for even the tightest hairpins. If there are girls watching, by all means quickshift it into second for added pizzazz.

On that day, a few of my terrible friends were along for the race…erm, ride to Port.

Deano won because Deano always wins because Deano. That he did it on an ancient little GS with rubbish Shinko rubber shamed me not at all. I’m used to it.

Frogs came a distant second on an old Buell because Frogs is fearless in the face of death.

Woody passed me halfway down on his Multistrada because he was a cheating swine and he rides faster than me.

The other 22 riders ate my balls. Which made me feel very good about myself.

Oh, and the cops outside of Longflat ate my balls too. They did stop Gus, which is always hilarious. You, see Gus is deaf. He talks like deaf people talk. When you talk like that to a policeman, his training tells him you’re deranged by drugs and alcohol. So, things get a little heated until Gus explains, as only Gus can, that he’s not drunk, but profoundly deaf, and they should put the Tasers away.

What did I furrow my brow at? Very little, as it turned out.

The horn was weak and febrile, like a dying swan. How am I supposed to indicate my displeasure at your driving? How is this even Italian?

The headlight was acceptable, but only just. Or maybe I should just slow down at night. Yeah, that’s it.

I could strap nothing to it because that is the modern way of making motorcycles these days, so I carried a backpack. There are luggage options for the Monster. But I did not have them. I can hardly mark it down for that.

The dash and its ride modes and engine maps and adjustable acronyms was relatively easy to bumble through. I did it once, left it in Sport and went on my merry way.

On the return leg, the Oxley was closed, and I was sad.

But Al and I found a way to Gloucester via Wingham and the hillbilly-rich little settlements west of that abattoir-loving town.

The smoke was thick upon us, the road was winding and fraught with bad bitumen.

The Monster was totally in its element, and I was totally in mine. Together, we might as well have been a Silverback gorilla beating its chest and tearing down trees.

The Monster 821 Stealth ain’t the perfect bike, but it will surely do until one of them comes along.

The Stealth I rode is $18,590 ride-away, but if you want the red one without the headlight and seat cowls and with no quickshifter (but you gotta have the quickshifter), then it’s $17,500. I know which one I’d buy.

YOU MAY EXAMINE ITS SPECIFICATIONS HERE https://www.ducati.com/au/en/home