Here’s a little prediction for you. In the wake of the bushfires, you’ll be seeing a few more dead animals on the roads. If you’re lucky – and yes, luck plays a big part in this equation – you’ll see the live ones and maybe not hit them. If luck is not with you on that day, then you will hit them, and that is a very bad thing. Most of the time.

I have lost three friends this way. Two were killed after hitting kangaroos. One was killed hitting a deer. A whole bunch of other friends have sustained terrible injuries as a result of hitting an animal.

I myself nailed a kangaroo north of Pinda in South Oz at 180km/h and miraculously escaped with some bruising and a bike that somehow remained upright after the impact. Pure, unadulterated luck in that case. I should be dead, or maimed, or both, but it was not my day on that day.

So after the bushfires, when the animals are far more active looking for food in a burned and ruined landscape, it’s a fair bet more people will hit them.

Can this be avoided? Are there things you can do to minimise the risks?

I’ve ridden several million kilometres over the years, and I guess the answer to both of those questions is “Not really and not always”.

But there are some things you need to consider which may assist you.

Firstly, there are animals you can hit with some degree of assurance you will not crash.

Rabbits, mainly. Echidnas, possibly. Snakes and lizards. Though the latter can be problematical. Belt across a big Parenti lizard and see what happens. Run your tyres over a large King Brown and hope it doesn’t fasten its dying fangs into your thigh as it rears up with its back broken. Most of the time, you’ll be fine; it will just be a small bump and off you go. But now and again…

So lets go up a size. Cats and dogs can get wedged in your wheels and cause a lock-up, but they are largely an urban problem and feral cats aren’t stupid enough to run in front of cars on country roads. Big dogs are also an urban problem and they will bring you down and the owner will probably put the boot in as you’re lying there. Foxes are also touch and go. Some you can run over with impunity and a slight shimmy of the front-end. Others will send you sailing into a tree. Don’t worry so much about goats. They always run away from the road.

And so we come to the big beasts. Kangaroos and wallabies. Hefty, muscled bastards with panic-stricken brains who can turn on a dime, are camouflaged to perfection, and will do all sorts of Crazy Ivan stuff. They will even run into you. And anything that weighs between 50 and 100kg running into you will end poorly for both of you. 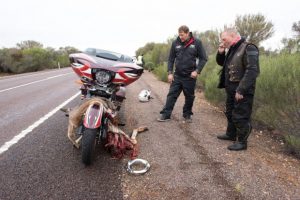 These bouncy kamikazes prefer early morning and late afternoon for their suicide runs, and they are always out at night.

Wombats are also trundling disasters. Imagine hitting a 30cm-high rock at 120km/h. My mate Daz did. It was already dead and right on the racing line on the Oxley Highway. Daz hit it and cartwheeled himself off the road and into a gully where he lay for a few hours enjoying his broken bones and pulped organs. Their only saving grace is they move relatively slowly, which means if you’re on your game, you may be able to avoid one as it comes steaming out of the scrub.

And then we have the big guns – deer, brumbies, camels, micky bulls, and feral steers.

You’re dead. Or you’ll be so badly injured you’ll wish you were.

So what can you do to minimise the risk, which I can assure you will increase as the bush regenerates?

Not all that much, but every little bit helps in this case.

Firstly, read the road ahead. If there’s a lot of fresh roadkill around, it’s a fair bet there are more creatures waiting their turn to die. Kangaroos travel in mobs – and where there’s one, there will be more.

Secondly, position yourself as close to the middle of the road as you can. This gives you a bit of room to manoeuvre if something does jump out. It ain’t much, but it’s all you have. Oh, and don’t manoeuvre your way into an oncoming truck when you’re dodging marsupials.

Thirdly, understand what time of day it is. Like I said, early morning, late arvo, and night-time are Peak Hour for the beasts.

Fourthly, if something does suddenly appear, grabbing big handfuls of brakes can be a very bad thing. Under massive braking, you are no longer able to steer your bike. Acceleration can sometimes be your friend in this case. Of course, sometimes gassing it on will only make things worse. But at least you’re in control under power.

Often, you only have nano-seconds to make a call. And the faster you’re going when something sails onto the road, the fewer nano-seconds you have to make a decision about what needs to happen.

Stay as alert as you can and be paranoid. They are out to get you.