Giving me helmet-comms units to test is kinda like giving a chimp an iPhone. There’s lots of noise, some running in circles, and then stuff gets broken.

Then there’s the fact I don’t use helmet-comms. It’s a wonderful technology I’m simply uninterested in. But I know lots of people do, so when Ficeda sent me two different units and said: “Please compare the two”, I strove to comply.

When that didn’t work, I called Al. Al is a computer-systems engineer, so I figured this helmet-comm stuff would be child’s play for him.

As I watched him fit the two units to two different helmets, I realised it was the right call. If that had been me sitting at the table with a pile of wires, speakers and mics, the only thing that would have been tested was how far I could throw these two boxes.

But Al fitted them both up and this is what we subsequently discovered – because while I may not possess the patience to instal the stuff, I sure as hell know how to make and take a phone-call.

Shark only sells one brand of helmet. According to its web site, “The SHARKTOOTH® PRIME fits all helmets but is especially designed for the SHARK Helmets.”

One of the helmets I had was a Shark. I decided I would put the Sharktooth Prime in that one. The Interphone Edge I put in the sex-looking Origine 99 helmet.

Both of the comms units have two speakers, a microphone and a control unit containing electronics and battery. The Interphone Edge has an extra microphone, and switches on the control unit. The Sharktooth Prime has separate switches.

The installation took about half-an-hour for each helmet, ie. remove the padding, install the devices, and replace the padding.

The Sharktooth control unit fits inside the lining at the back of your neck. The Interphone Edge control unit is glued to the side of the helmet.

The Shark helmet was a more expensive helmet than the Origine. It felt more luxurious. There was thin padding over the speakers. I had to put the speakers under the padding.

I finished the installs, and said to Boris “Let’s go for a ride and see if we can call each other!”

“No, YOU will go for a ride”, Boris countered, “and I will sit here and drink German beer, and then, after a time, I will call you.” So I did. 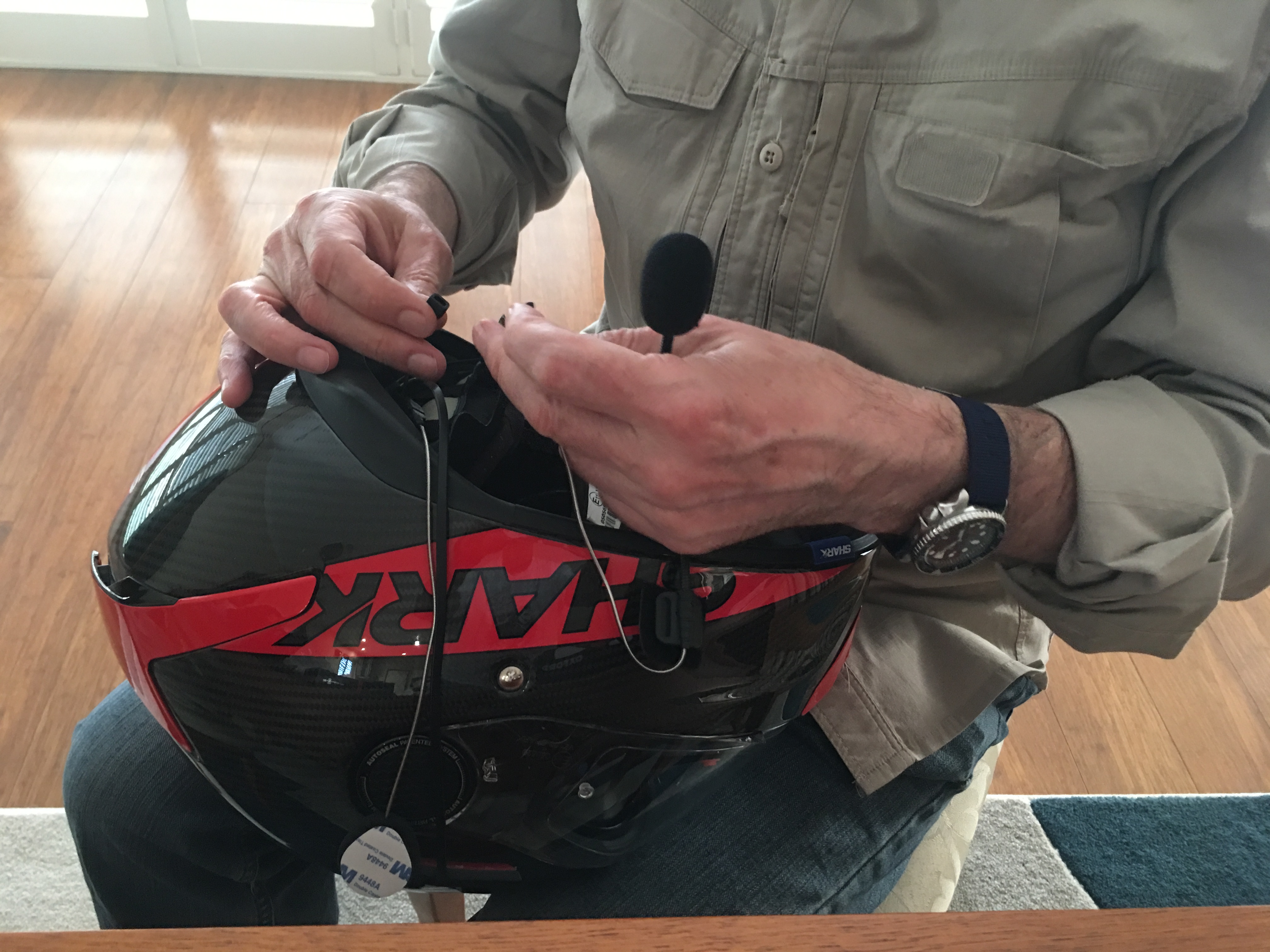 The Shark was first. I paired it to my iPhone. It was trivial and easy. I tested it by texting Boris some future pet acquisition advice using Siri. It turned out Siri didn’t work from the Bluetooth device but it could hear me because my phone was on the dining table and I could hear the noises coming out of my helmet. I went for a ride, and Boris called me. He sounded as if he had been drinking. I was doing about 60km/h, and I could hear him just fine; and he said I was as clear as a bell. Then I increased the speed to 80 km/h, and I could only hear maybe every fifth word. He said I was still as clear as a bell, so at least he didn’t have slurred hearing.

I stopped a bit later in a 100km/h zone and started the music player on my phone. It was kind of okay on the way back. It sounded like wind noise with music, which I guess is better than just wind noise.

VERDICT: Fine for commuting, iffy for anything faster, but at least whoever calls will hear you when you say you can’t talk right now and will call them back.

I blame the padding over the speakers.

The Interphone Edge was next. Again, pairing it with the fruitphone was simple. Again, Boris called me in the 60km/h zone. I could hear every tone in what appeared to be a satisfying belch as he cracked another Hefeweizen. I increased the speed when I hit the 80 zone and I could still hear him, and he could still hear me. Then I hit the 100 zone and all was still well.

I stopped, put on some music, and turned around and rode back to Chez Boris listening to Harry Manx.

Verdict: This is the one.

The Interphone has a neat voice-menu system in it, so you don’t need to read the manual, which is good because there wasn’t one in the box and because some people think reading the manual is surrender.

The combination-control-unit on the Interphone is bigger than the sum of the switches and control unit on the Shark. It may have a bigger battery. That would be good.

The Interphone got installed in a helmet called a “Origine 99”. I’d never heard of them. The test unit looked really sharp, the linings fitted well, and the comms unit fitted well. It was also quieter than the Shark, although the Shark hugged my cheeks harder and felt snugger. Boris said they cost $99. Outstanding value if true.

I couldn’t get Siri to work on Bluetooth. Google says it works with Apple Bluetooth devices if you press some button. I couldn’t get it to work with either test unit.

“This means nothing”, I said to Boris. “There are so many variables. I reckon the Sharktooth would be just as good if not better in the other helmet if the control unit fitted in the back, but the lining gets in the way. Also, you will be shocked to learn that not everyone’s head is shaped like mine.”

“But your head is beautiful and full of knowledge and expertise,” Boris said. “Unlike mine.”