The armchair experts were out in force after my last column. Apparently some of you know everything there is to know about bike racing, and called bullshit on my theory about Lorenzo’s use of soft tyres to try and get a good start, while knowing it would be his undoing later in the race. Even worse, some of you thought he wasn’t at fault in the crash that brought down Dani and Dovi. Clearly some of you would be more suited to watching reruns of The Muppet Show than MotoGP. You’re probably the same people who think wearing bright colours will save your life on a bike, or that somehow sitting at a cafe on Sunday morning with a bunch of other coffee drinking morons and looking at your bikes instead of riding them makes you “cool”. It doesn’t, it makes you a coffee drinker, not a motorcyclist. You don’t ride motorcycles. You just use them to commute to the cafe. You probably pay someone to trim your beard too. Real motorcyclists trim their own beards. Oh, sorry, forgot you’re a Lorenzo fan. You probably can’t grow a beard. 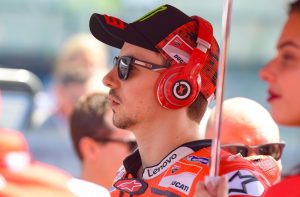 The good people at the Motorcycle Alliance wrote me a nice telegram (I don’t have a computer) and told me they were getting hate mail from Lorenzo fans after publishing my last report. But they signed off on the telegram with “kind regards” and not “You’re fired”, so I guess that means they’re happy for me to keep pissing people off. So here goes.

I bumped into Lorenzo in the paddock on Friday at Le Mans. He was scurrying away from Cal Crutchlow, who was out walking his Capybara, Tito. Cal’s even had little custom running shoes made for Tito, and he has become quite popular around the paddock since he stopped biting people. Lorenzo always runs when he sees Crutchlow coming. But he’s not alone there.

Jorge called out to me when he saw me.

“Hola Tug, ya dickhead!”, in what was clearly a veiled reference to the title of my previous column.

I noticed he wasn’t laughing. But George is not disposed to mirth. He’s a serious character. Just ask his crew. Or his mum. She can’t stand him.

“G’day George. I see you enjoyed my last column?’

“I don’t read your column. Besides, you said I only used soft tyres to get attention and I knew I’d lose.”

“So you did read my column, then?”

“No, I made my suspension engineer read it to me. I would not poison my beautiful and accurate eyes with your dumb words.”

“That is my secret. You will never know what tyres I choose.”

“Yes, I will. I will know on Sunday when you put soft tyres on your bike again and go out to race.”

“Walk on. You are finished with being in my presence.”

“Ok George. I hope you get to at least half race distance this week before you drop down the leaderboard like a dead bird falling from the sky.”

“If I am dead bird I no drop from sky, I fly like owl from the ashes!”

“Phoenix, George. It’s the Phoenix that rises from the ashes.”

“They don’t actually exist, George. So that means you are a myth. Like people winning races on soft tyres.”

He then got the security guard to kick me out of the Ducati hospitality marquee, which was a shame, because I love Italian food. 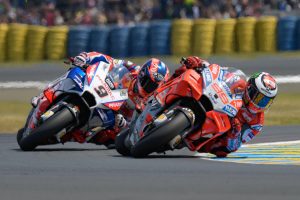 George looked good. Until a bloke on the same bike as him and earning 1/10th of what he does handed him his arse.

George then went on to race on soft tyres, in an effort to prove me wrong in my words of two weeks ago. As it turned out, he raced very well. For about 5 laps. Then he dropped down the leaderboard like a dead Phoenix. All you haters from two weeks ago can now go and choke on your own emptiness. I know you are hurting, and it buoys me. The Tug was right. Again.

By the way, George is now blaming the fuel tank of his Ducati for his drop in pace. Apparently it makes braking hard for him and his poor little phoenix arms are getting tired, making it hard for him to brake and maintain corner speed. No, George. It’s your overheated soft tyres that are doing that. I think George has more of a “tanking” issue than a “tank” issue. 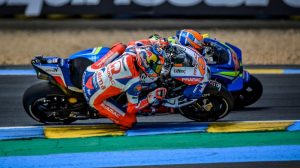 Then Miller came for him too

But there is much more going on in the Ducati garage than George’s issues fitting himself around the tank. Dovi signed a 2 year contract extension last week. George is currently looking at his options. It’s a fair bet Ducati isn’t one of them. There’s talk he even rang Hyosung to look for a deal. Suzuki is apparently interested, now that his value has dropped considerably. Yamaha won’t have him back, and Ducati are already looking closely at promoting either Petrucci or Miller to the factory team, both of whom beat Lorenzo on the weekend. Being passed by Petrucci is one thing, for he is on the same 2018 bike Jorge has. But when Miller comes past you on the bike you were riding last year, you know you’re in the shit.

Iannone is on the skids at Suzuki, and did himself no favours by ploughing the flying blue shovel into the gravel again. 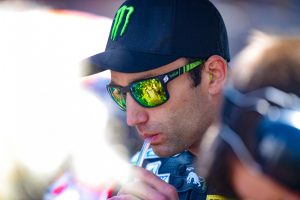 Zarco said all weekend he didn’t feel the pressure of being the home town hero. Until all of a sudden, he did.

So my guess is Lorenzo will replace Iannone at Suzuki, and I think Petrucci will be unlucky and miss out on the factory seat in favour of Miller. Jack has already been promised that next year he will have a 2019 bike to ride, regardless of which team he is in, so it may well be the factory one. Ducati love Australians riding their bikes, and have had great success with Stoner and Bayliss in recent times. Who could blame them for wanting to recapture that?

The truth is, they don’t see Petrucci as being capable of delivering a championship. But Miller, with another year or two under his belt, will be a contender. He has already shown much growth as a rider this year, and Ducati will be well pleased with his progress. And here’s a hot tip, young hotshot Joan Mir will be on a Pramac Ducati next year. Put your ex-wife’s house on it. 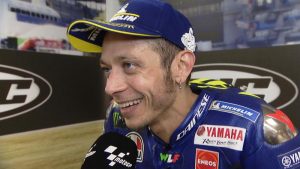 “I can still win, but ze bike isa shit”

The Doctor found himself on the podium, but he’s a pragmatist. He knows it was largely because Dovizioso and Zarco binned it, otherwise he would have been 5th. An upright Iannone may have seen him in 6th. His pace was very good, but he knows he needs a little more from his Yamaha if he’s to win. So he poured the pressure on the factory in every interview he did after the race, letting everyone know the Yamaha isn’t up to par and needs a tickle up. The only problem with that is Zarco is riding last year’s bike and is sticking the thing on pole and running in front of both the factory bikes. Right now that is playing out far worse for Vinales than it is for Valentino, so the Doctor is still the favourite son at Yamaha.

Crutchlow was declared brain dead at hospital on Saturday night after a high side that would have put the old timers from the pre traction control days to shame. Despite being brain dead, he came out and rode quite respectfully on Sunday. He’ll be sore now. Thankfully he’s got two weeks before Mugello to get the bruises out. They will be the nice purple ones with the yellow bit in the middle by now. 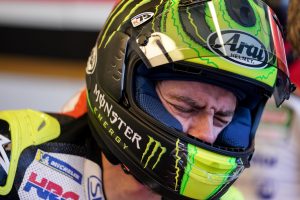 Cal was hurting. He rode exceptionally well. He’ll be paying for it today.

We haven’t mentioned the winner yet. It’s almost like it doesn’t matter any more. Marquez has won three in a row now, and barring catastrophe, has the title in the bag already. He is so much better than the rest of them there will have to be a new rule put in place to try and achieve some sort of parity in the class. Like blindfolding him. Or removing a limb. Interestingly, this latest victory puts him level with Casey Stoner on the all time premier class winners list. There’s only a few others ahead of him now, and before he’s done he will beat most of those too.

There was a moment in Sunday’s race that summed up the Marquez of 2018 and why he is now pretty much unbeatable. For a long time many have lauded his speed and skill, but lamented his lack of race “smarts”. One thing everyone agreed on was that when he grew into his talent a bit more, and linked it with well thought out racing, he would be impossible to beat. That day has come. He had a crash in a left hander early in the weekend when he lost the front. He tried to save it as he so often does, but failed. In Sunday’s race, he lost the front again, in exactly the same spot, on the same corner. This time he saved it, and went on to win. The slow motion footage of the incident shows just how complex and effective this guy is as a racer now. You can see the front go, and within milliseconds, Marquez pushes his shoulders down towards the tarmac, digs his elbow into the ground, flexes his lower half to put pressure on the inside footpeg, and picks the bike up. 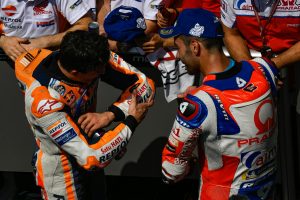 Petrucci had the best seat in the house for Marquez’ big save. They joked about it afterwards.

It’s no fluke. It’s planned. It’s strategic, deliberate, and has been practiced so much that it is now a reflex. In a situation where every other human crashes a MotoGP bike, Marquez just instantly activates Plan B and gets on with winning the race like nothing happened. Every other rider in the world trains to go as fast as they can. Marquez has clearly gone out and trained in how to fix the shit that happens when you go faster than what everyone else is training for.

Next round is Mugello. Home ground advantage to Rossi. It will be 10 years since he has won there. Marquez will make sure it becomes eleven. And watch for the competition between the Pramac boys for George’s seat to spur them on to big things. I’m tipping it will be a Marquez win, with Petrucci and Miller sharing the podium.