I ride for solitude, and solace, and to feel the bitter salve of the wind and rain and heat. The sunburn. The windburn. The near frostbite. It all soothes the soul. No other reason you can come up with makes much sense to me. Your need for camaraderie and “freedom”, and your desperate need to be included in some mythical community are meaningless to me. And BMW has created the perfect motorcycle for real motorcycling. For all of us. Even if you don’t know it yet.

This perfect motorcycle is called the R NineT /5 (lets call it the Slash 5). It perfects perfection. And it’s entirely appropriate that it was built by the Germans. They started this after all. 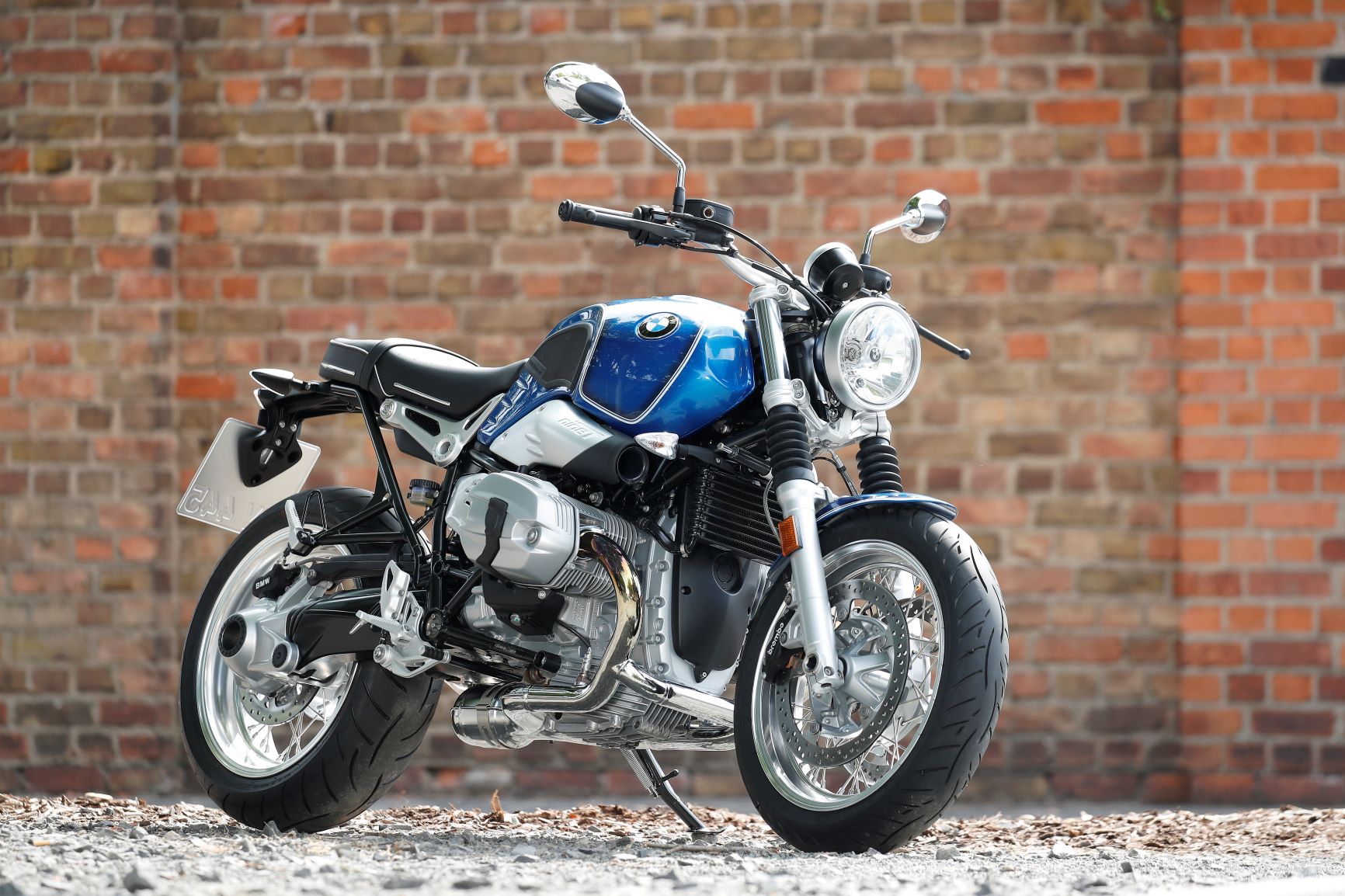 But first we need to make a brief examination of what you think motorcycles are for. Their raison d’être.

And if at this point the word “freedom” has popped into your head, you need to step out to your shed and find a suitable tool to kill yourself with. Motorcycling doesn’t need you. Never did. You’re really not a good fit.

When the good German Gottlieb Daimler built his Reitwagen (the first internal combustion engine powered motorcycle) in 1885, he didn’t invent it as a way to create a feeling of freedom for fat bastards who wanted an excuse to wear arseless chaps and tassels in public. Germans didn’t even learn about freedom until about 30 years later anyway.

He simply wanted to create a way for people to get about more conveniently. He was clearly a creator of German efficiency. He did the same with cars and boats. Moving people about using thousands of small explosions every minute was a bit of a thing for him. And what a great man he must have been. A visionary. But he was not known for ever wanting to build freedom, so let’s just get that bullshit out of the way. Besides, any pastime that sees you constantly terrified of being caught by the Bronze for having too much fun can’t really be compared with freedom, can it? Freedom is a concept best left for discussion by people who were born without any. They get it better than the rest of us.

So let’s just accept that motorcycles were originally designed to move us from place to place. They do it very well. And very quickly for the most part, and as such they appeal to many of man’s inner desires, which is simply a happy coincidence that old Gottlieb may not have foreseen.

We like pretty things. We like danger. We like speed. We like to be thrilled. We like to show off for girls (or boys). So we like things that make us feel more impressive than we know ourselves to truly be. And when we are too egotistical to admit that to ourselves, we come up with other reasons for owning a bike, like “it makes me feel free”. Get it now?

Thankfully, over the last hundred years, give or take a decade, the various motorcycle manufacturers around the world have taken Daimler’s humble invention and found ways to satisfy all of those inner desires of man, with thousands of variations on the theme of the Reitwagen. And they have done it in ways that would curl the old German’s whiskers.

Take, for example, BMW’s own superbike, the S1000RR. It’s 25 grand of pure technological brilliance and brutality and mayhem in equal measure, and there’s only a dozen men in the whole country who can look deep into the depths of their dark hearts and know that they can ride that monster somewhere close to it’s potential on the road, and they’re all too smart to even try. They save their gonad polishing for the race track. But you? You buy one and ride it on the road, taking the utter piss out of yourself in public. You can’t use 20% of that amazing machine’s capability on public roads, so piss off with your racer boy leathers and your retarded straight armed riding style (because the correct sports bike posture is too uncomfortable for your rarely activated, lazy, fat core).

Sure, the Master Blaster Bimmer is potentially the perfect sports bike, and every manufacturer can claim their own flagship sports bike to be there or there abouts too, because they are all that good. But as a road bike? No thanks. Too many compromises. Uncomfortable, crap at carrying shit, and pretty girls’ butts get sore on those afterthoughts stuck on as a pillion seat (assuming you get one). She’d much rather be sitting on the Slash 5, and so would you for that matter. You just haven’t realised it yet. You’d also be about as fast on the Slash 5 in the twisties as you are now. Probably faster.

Then there’s the big highway mile munchers. A Goldwing for example. Nothing covers big miles with luggage like a ‘Wing. They are staggeringly good. But they are shit at most other stuff. And that’s OK.

You wanna be a wannabe outlaw and get a Harley Softail? Cool. Good for you. They make some good stuff. Great for deluding yourself that you are tougher than you are (nobody’s is buying it, just so you know). But there’s still only certain things they can do well. Not for me, thanks.

You want a good looking bike then? You want Ducati pretty, MV Agusta sexy, or Bimota brutal? All your call. But all those pretty, sexy, brutal bikes also have their limitations.

And this is why the Slash 5 is Perfect. It does all of it. The lot. And does it all well. Brutal efficiency, you might say.

It’s a bike so intoxicating to look at that it makes you desperately want to ride it when you see it, and no matter how long you’ve been doing this riding caper, it will still make you want to look at yourself in shop windows when you ride past. To see the sexy for yourself. Because you know the sexy is off tap, and you are riding with half a stiffy to prove it. 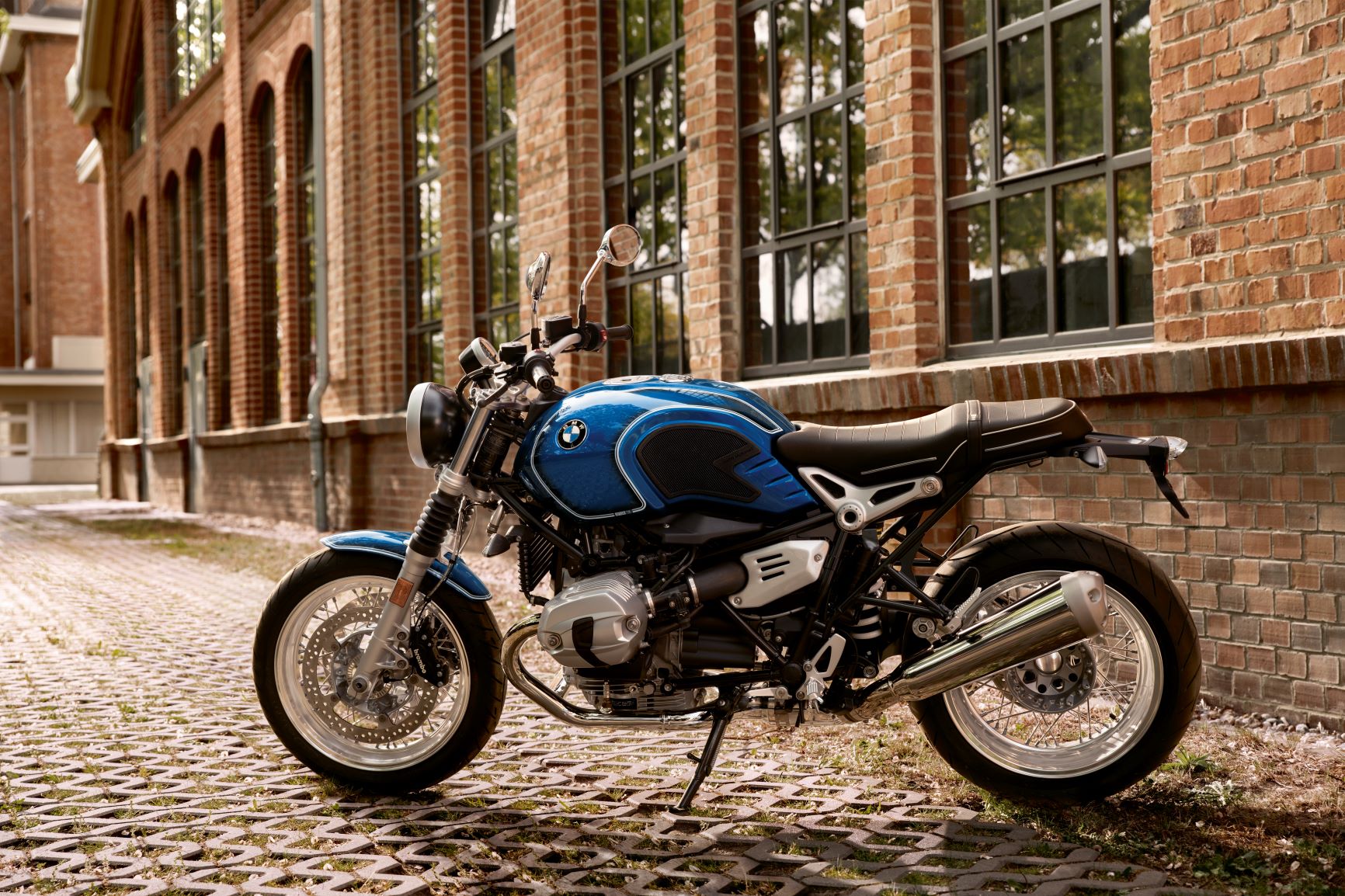 The R NineT /5 is a limited edition, additional model to in the R NineT lineup. I think it’s the best of the lot. It is a celebration of the 50th anniversary of the rather famous 1969 R75 /5, and has been very tastefully done. I’m not sure how many of them are coming into the country, but at this point they are all being sold well before they arrive. You may have already missed out for all I know. So I could just be teasing you like a dancer at The Men’s gallery, who will get you all boned up, but never go home with you.

You want pretty? This paint is beautiful, and the line-work and black smoke finish is a great nod to the original bike. It looks much better in person than in photos. Much, much better. I love the classy tubeless wire wheels. They are pure alloy sex. 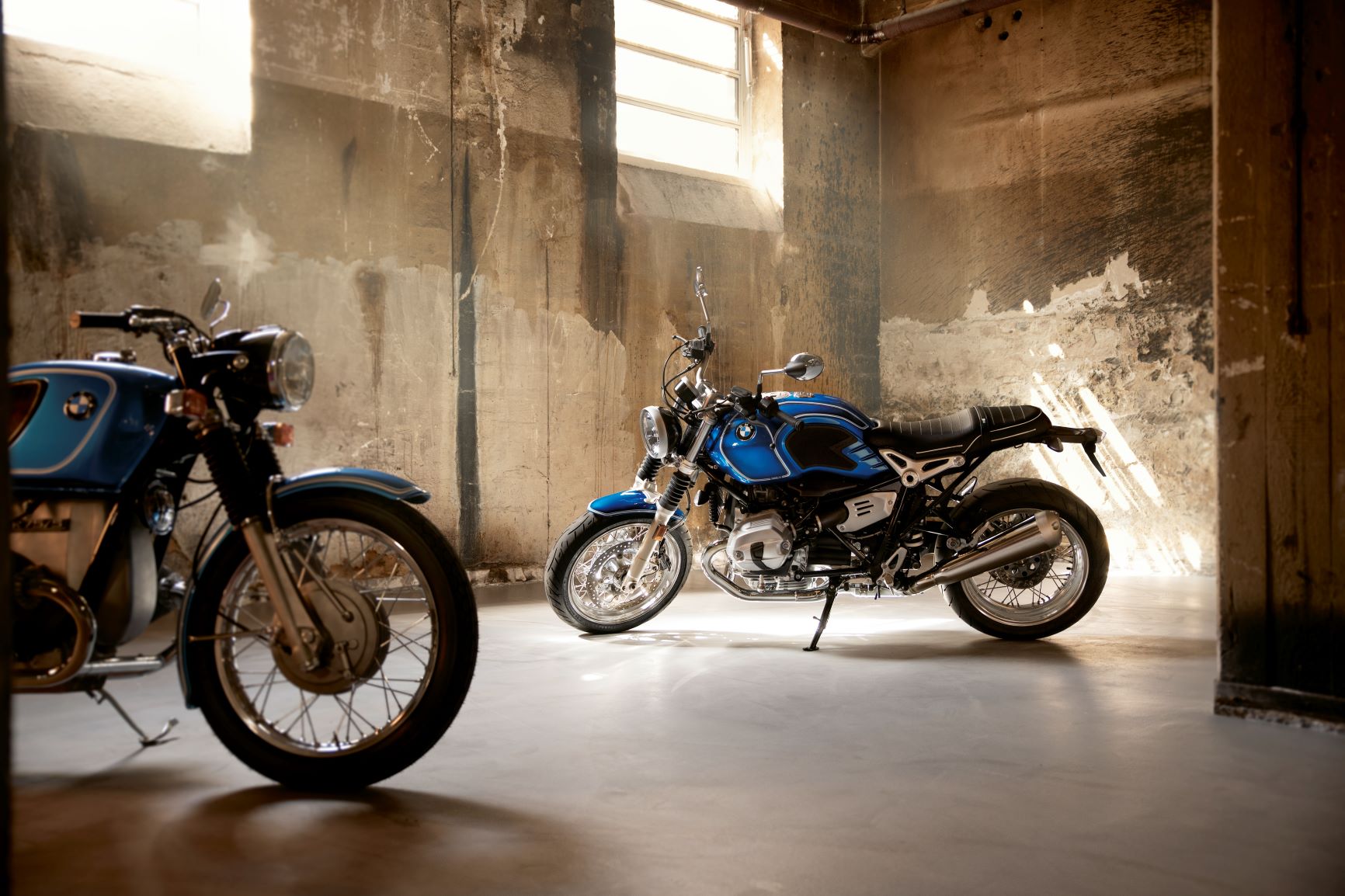 You want to eat miles and carry shit? The riding position is super comfortable and relaxed, and your passenger will be pretty chuffed too. It’s no Goldwing, but you didn’t want one of them anyway. There’s some luggage available for it if you desire, but I can carry enough undies, socks and tees for a week in a small backpack, so what else do you really need? 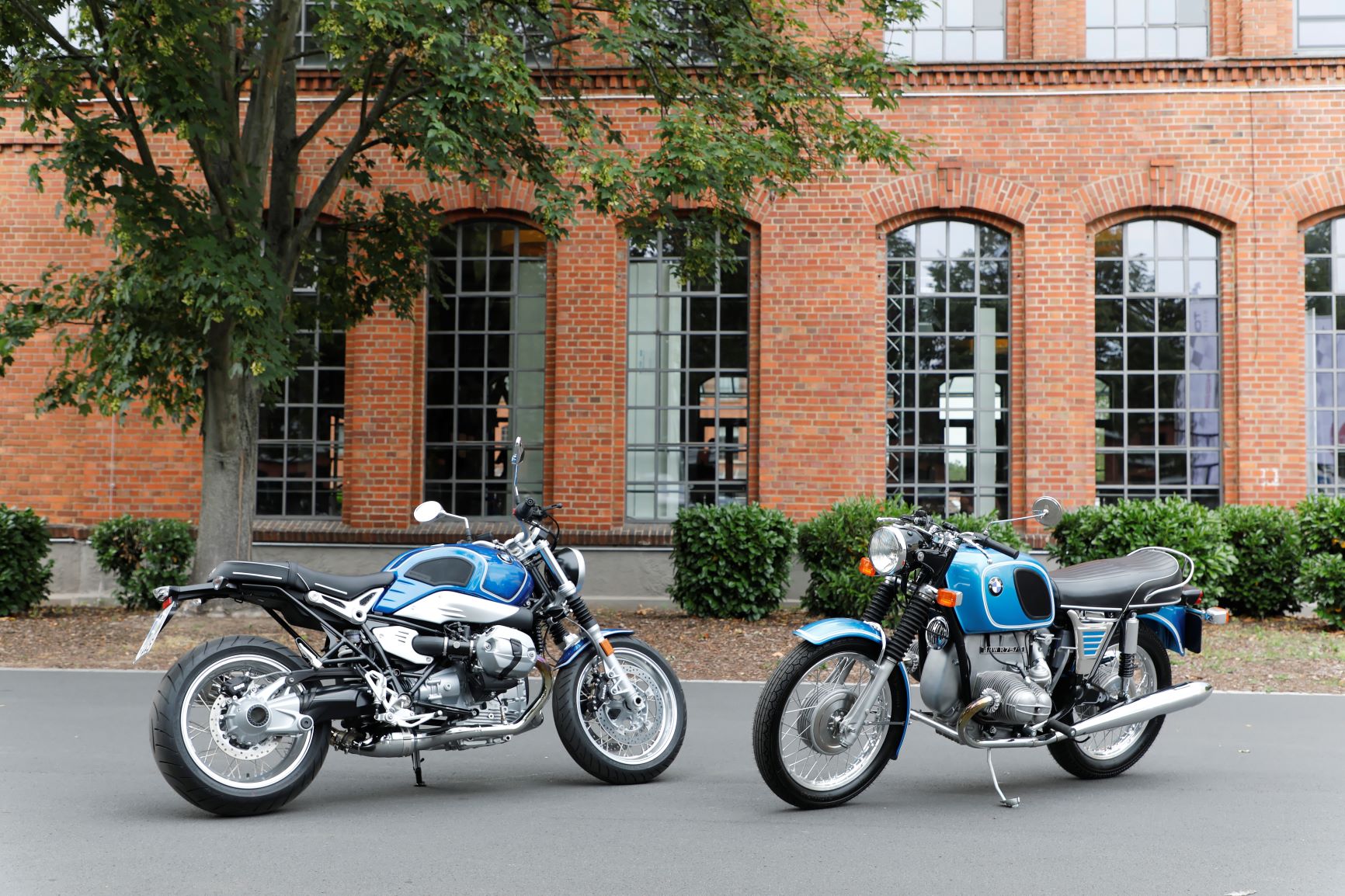 Is it sporty? It’s faster than you. Get over yourself. And it will handle just fine, thanks. It has good quality bouncy bits at each end set for a slightly plush but controlled ride.

BMW has been making boxer engines since before the religions started fighting over which one of them owns Jesus, so they’re seriously good at it. This 1170cc version is the last of the air/oil cooled incarnations, which is the perfect choice for this series of bikes as it helps keep that classic look. It will give you 110hp and 116Nm of trouble-free torque, providing more than enough fun to go straight to jail with. Which wouldn’t be a worry if only you had some freedom. 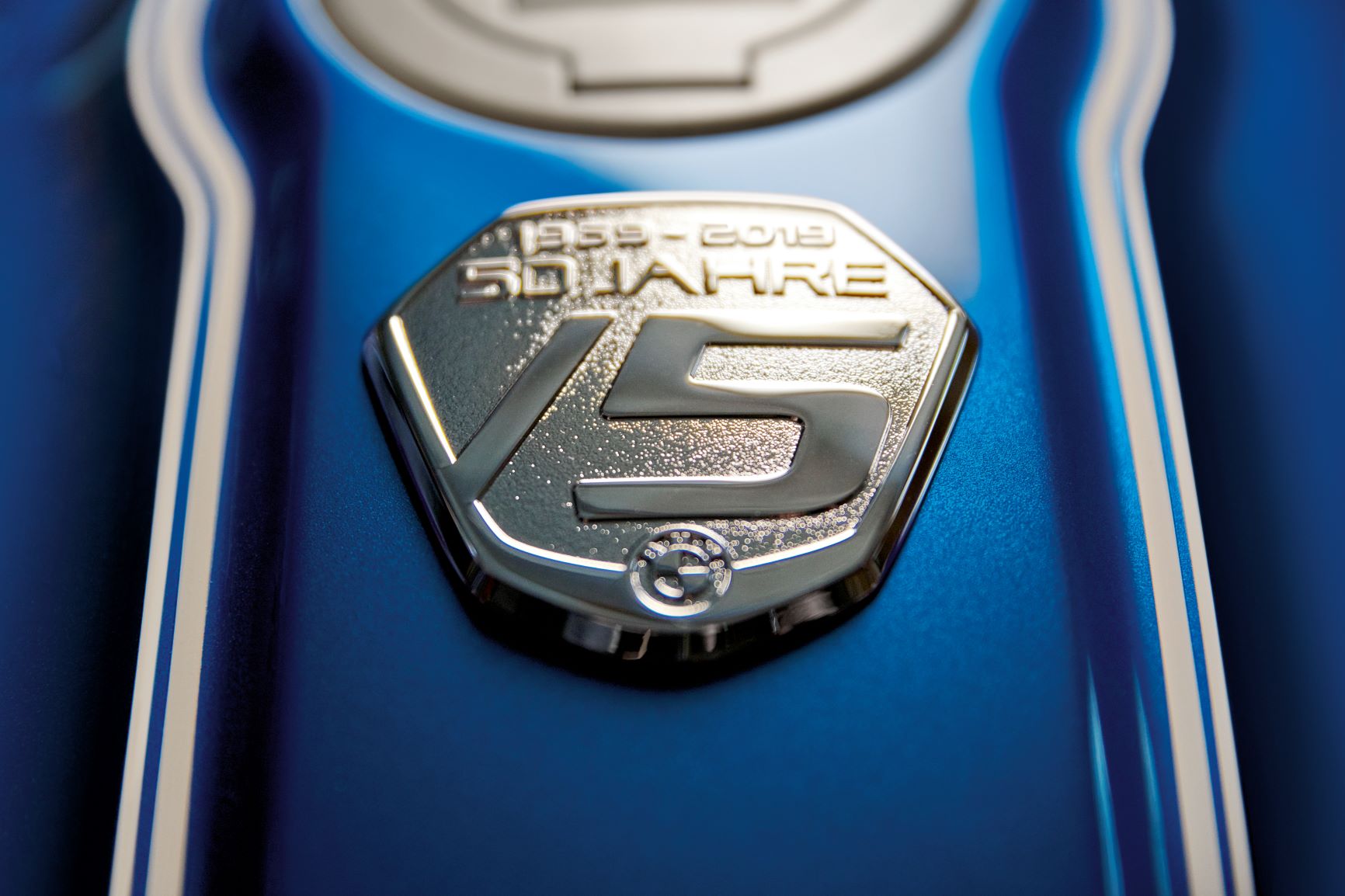 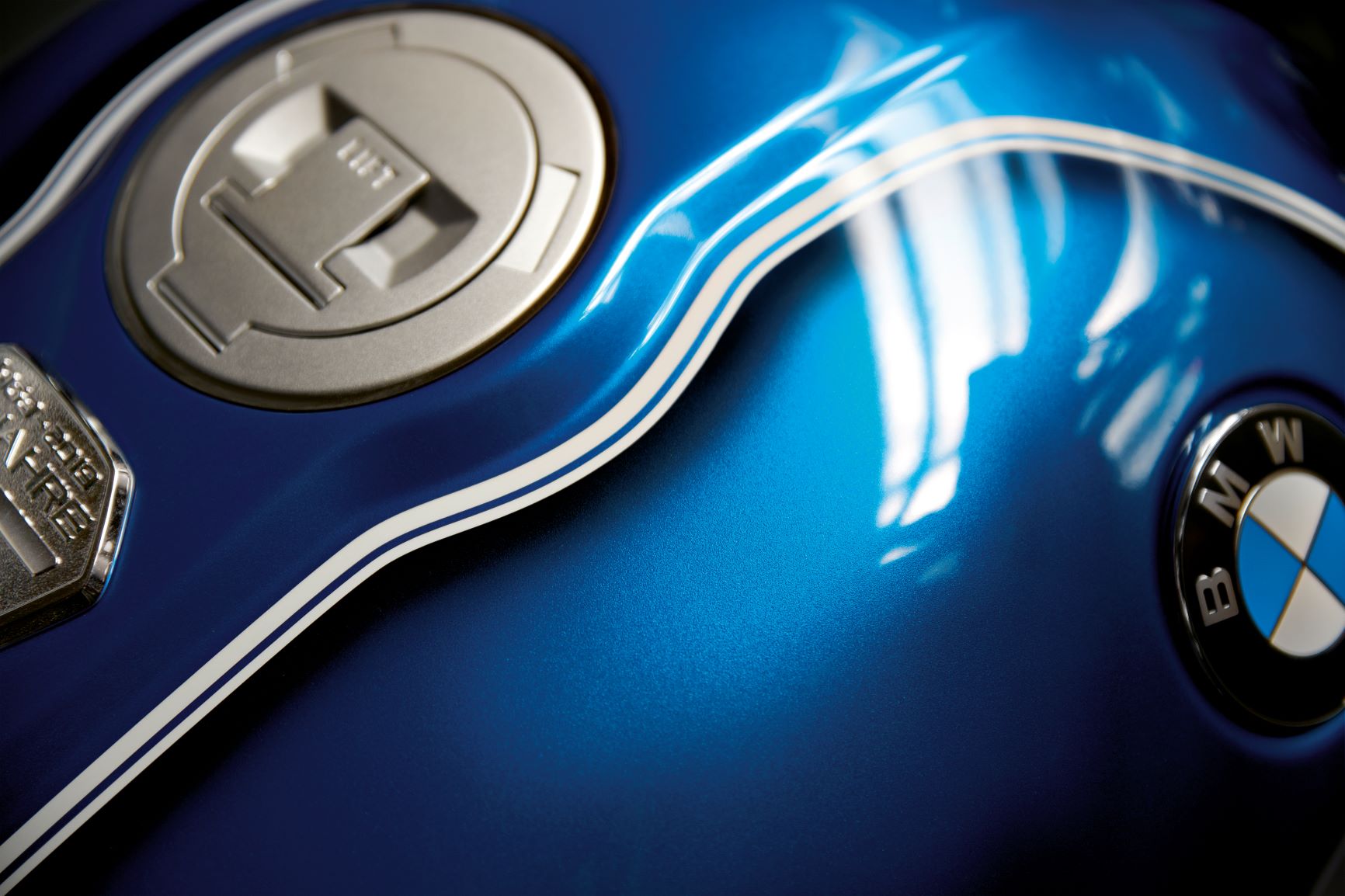 BMW boxer motors have proven longevity (they’ll often do quarter of a million kms and barely need a spanner put to them), and a character all their own. They are quirky, communicate with you better than any partner you’ve ever had, and sound great without making the neighbours hate you. If you haven’t ridden a BMW boxer, you should. They’re a guilty pleasure.

It has ABS, Stability Control, and heated grips, like I care. The first two are there for when you screw up, the last is for people with no soul. I have ridden dozens of bikes with heated grips and never found the need to look for the switch. I’m trying to get a warm heart.

There’s Brembo brakes that could have happily graced a proper superbike 10 years ago, and an exhaust that will go beautiful shades of blue and yellow and purple at the headers as it ages. 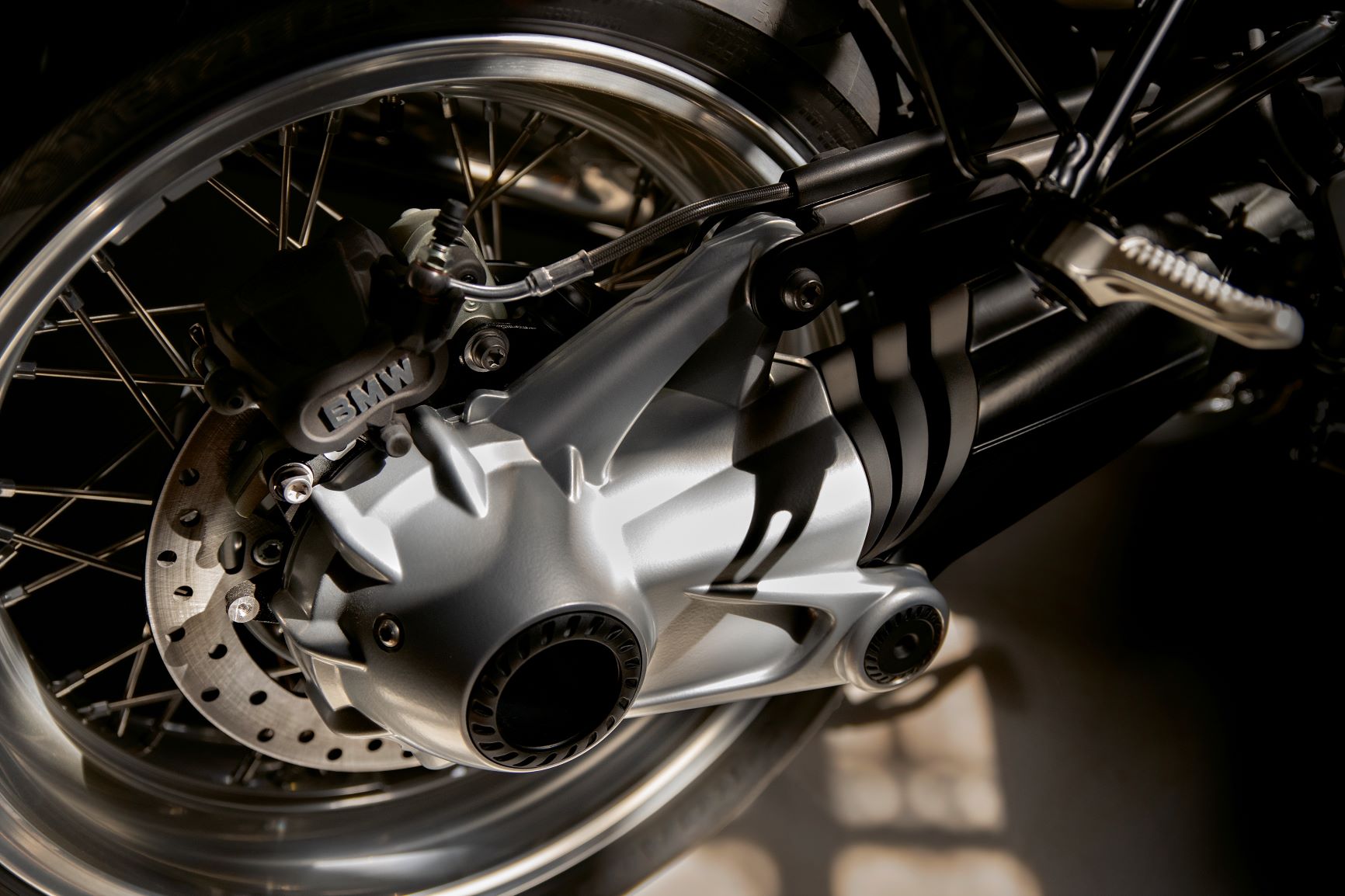 The Slash 5 has the famous Paralever rear end, so you never need to touch a filthy chain again, nor do you need to carry a can of chain lube when you go away for a weekend. Once you go shaft drive, you will hate dealing with chains with a renewed passion if you ever go back.

It has 6 gears. Like it matters. 5 would have done, but 6 is nicer. The gear change and clutch operation will, like all boxers with shaft drive, take a little getting used to, but once you sort it out you’ll be fine. It’s not a slick Suzuki gearbox, and it would be boring if it was. It works well, and that’s what it needs to do.

You’ll find it’s not covered in plastic stuff or gimmicks you don’t need, but it has all the things you do, and they’re quality bits too. If you really want, you can even customise it at a whim. Remove a handful of bolts and the entire rear subframe, including pillion seat and footpegs, comes away. Although I have no idea why you’d do that. How are you going to get the pretty little things home from the pub? 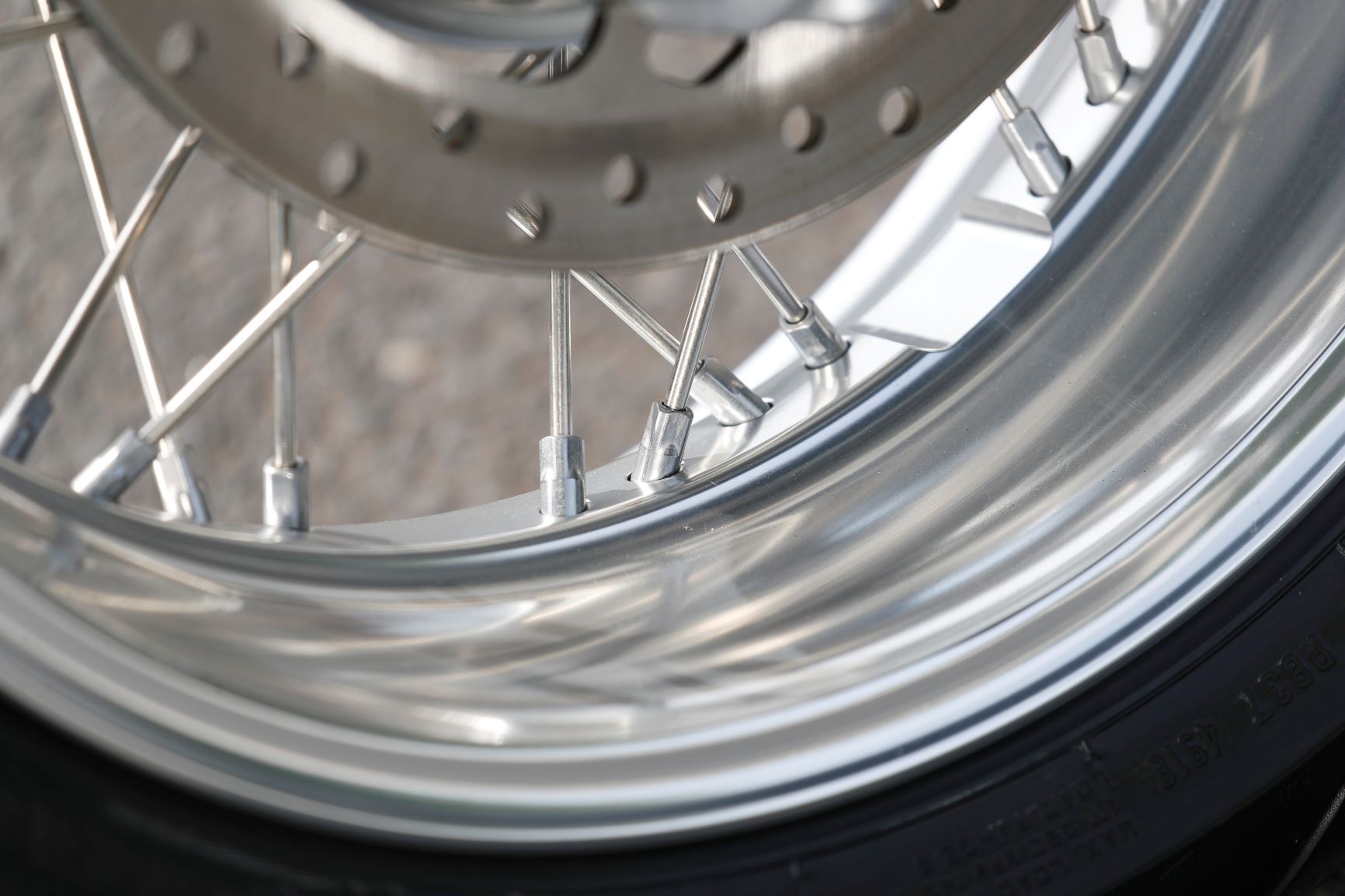 It is exceptional at the things that are necessary for being a great motorcycle. Like being thrilling to ride, assuming you know what you’re doing. It can give you the danger you crave. You will love sitting in your shed with it and just having a drink while you look at it. It’s not like you’ll be spending your time tightening and lubing chain, so you may as well just sit and have a whisky with it.

Riding is therapy for me. I usually do it alone. I prefer my pack riding to be done on the racetrack. The road is for the consideration of life, and other important things. The passing blur of black and green and blue and brown and grey is a healing thing. You know your speed by the passing of the roadside guideposts and reflectors. You know to change gear because the engine tells you to. You know only what’s ahead, because what’s behind rarely matters. It’s a metaphor for life. It’s why I ride.

Someone asked me why it doesn’t have a tachometer.

You probably wouldn’t consider buying a bike with no tacho, but how often do you actually look at it when you change gear? Serious question. If you’re anything like me, you’re too busy looking where you’re going. The Slash 5, and every other boxer engine for that matter, will tell you when to change gear without you needing a tacho. It communicates in other ways.

This bike is absolute motorcycling simplicity, in all its beauty. Everything that is required is provided in abundance, with alacrity, and precision. 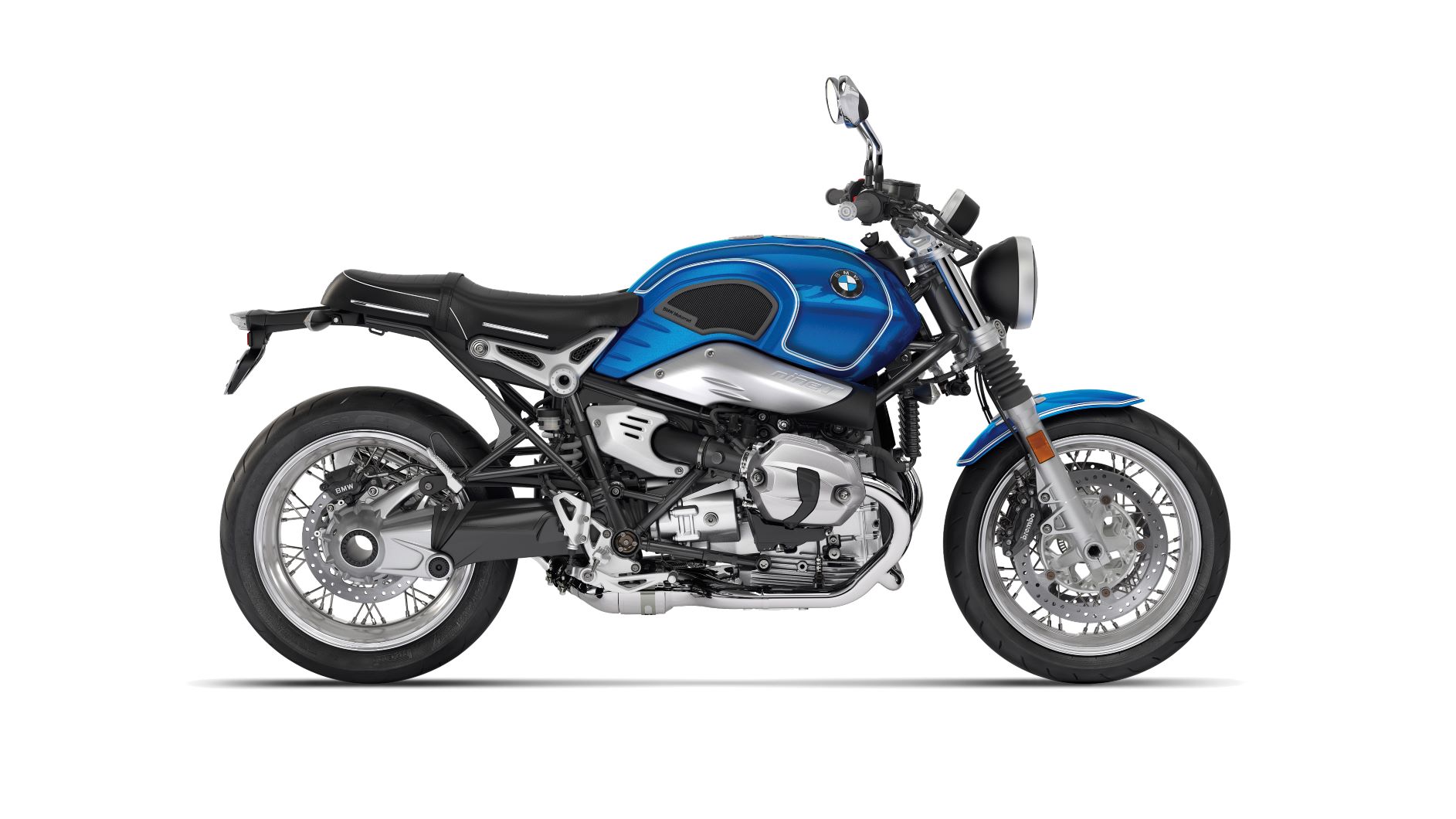 And I haven’t even ridden it yet. We both know a road test will only confirm what I already know. I’ll be sure to let you know if I’m wrong.

But you know I’m not.