I can think of no other new motorcycle that has generated the amount of wailing and howling the new Suzuki Katana has. Which is only right and proper because the original did the exact same thing when it first appeared in 1981. Back then, the motorcycle media was convinced the Katana would fail. It was simply too outlandish…too bizarre.

It turned motorcycling on its conservative head, and it’s always reminded me of Hunter S Thompson’s description of his drug-blazed lawyer in Fear and Loathing in Las Vegas.

“There he goes,” Hunter wrote. “One of God’s own prototypes. A high-powered mutant of some kind never even considered for mass production. Too weird to live, and too rare to die.”

I owned one for a time. A JCW-version. It was yellow. Which appalled me. So I painted it matte black. It holds a special place in my heart to this day.

When this new version was first touted a few years ago, I was very keen to see the finished item. The original Katana was such an iconic bike, any new iteration was bound to set social media into a frenzy. No matter what Suzuki did, it would be unable to please everyone.

And that is precisely what happened.

The new Katana came out and the peanut gallery went apeshit.

Yes, it is, champion. It says so on the tank. If Suzuki painted the word ‘Banana’ on the tank, then it would be a Banana. See how this works?

Good call! It certainly is. Just like the original Katana was a pimped-up GSX-EX. And you say it like it’s a bad thing? The GSX-S is one of the sweetest in-line fours on earth – a triumph of affordable kick-arse motorcycling. And a pimped one is somehow a bad thing? Please. 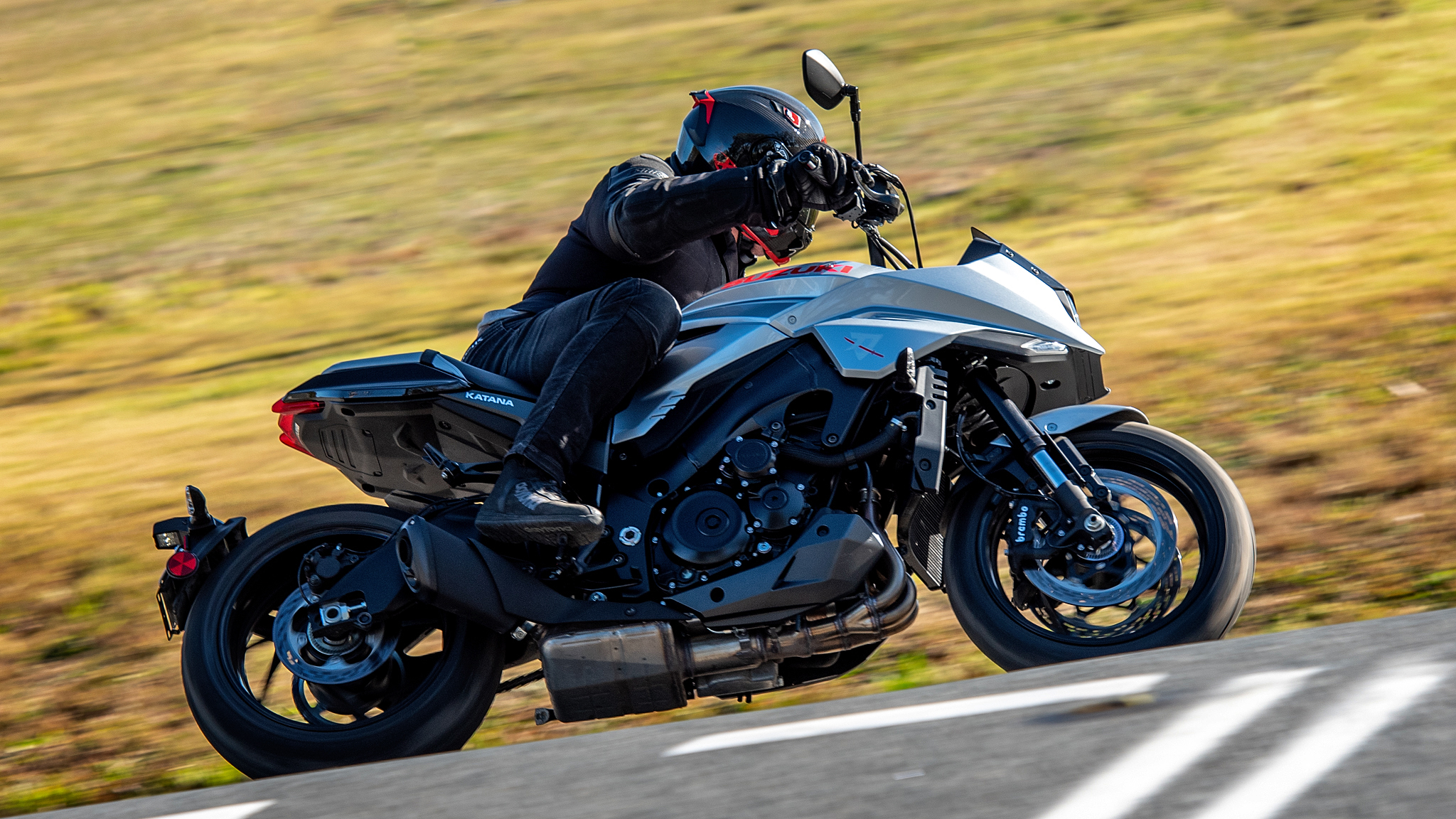 “It’s disappointing because it’s not ground-breaking.”

Um, OK. But what ground where you expecting to be broken here? If Suzuki designed something that looked like it was from another planet, you’d all yell even louder. And no-one would buy it. The current design pays enough homage to the original, while still affording you, the rider, all the mod cons you’d expect from one of the world’s premier bike manufacturers.

“It’s not like the original one at all.”
And thank the Baby Jesus it’s not. The original one was an evil, uncomfortable, tank-slapping brute that wallowed like mule-coach on Pirelli Silverdots. Dude, it’s now 2019, and everything handles and goes better than the old Katana. 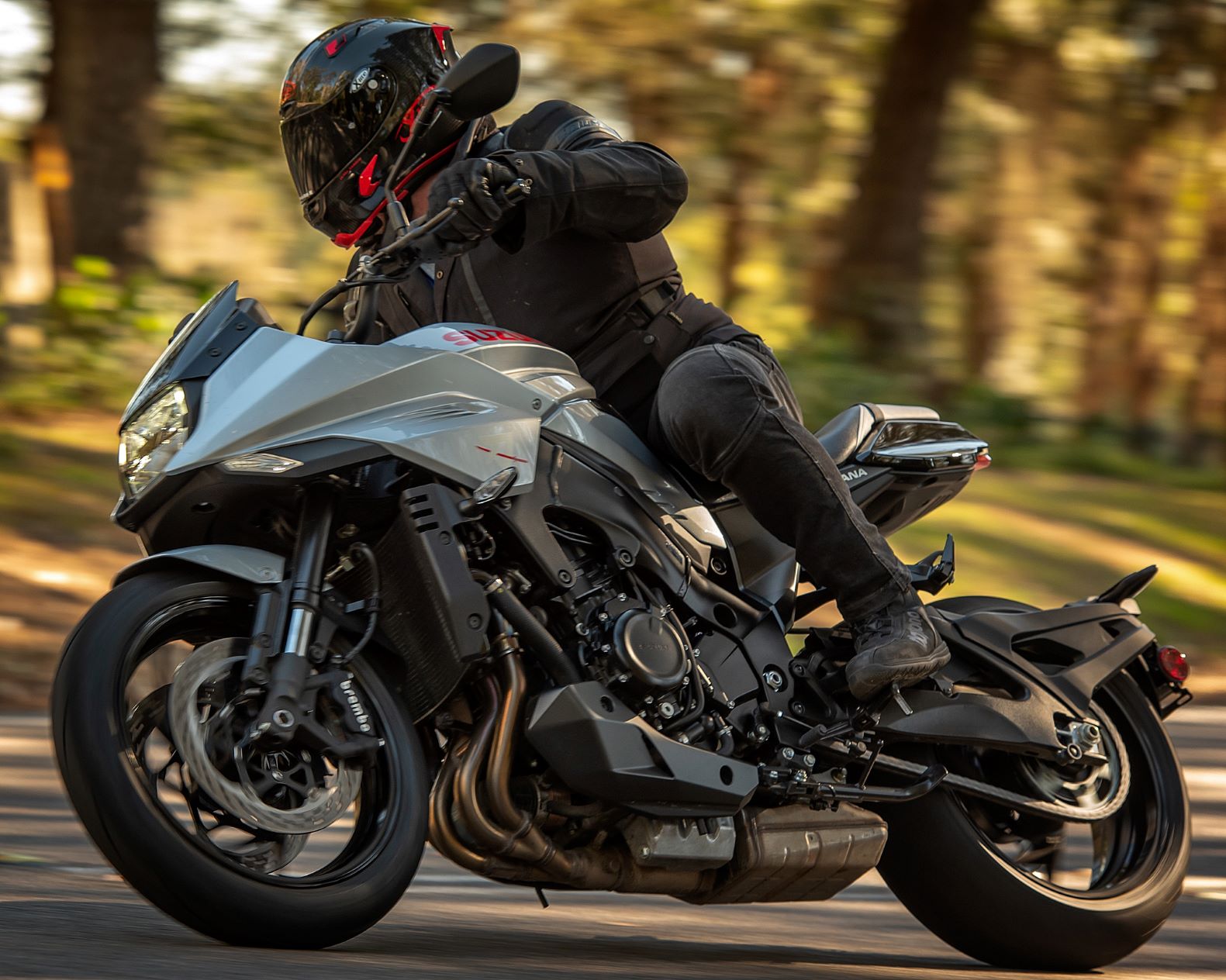 For what it’s worth, I’m of the view the new Katana does look a bit awkward from some angles, and spectacular from others. So did the original. It is certainly one of those bikes that looks better in the steel than it does in pictures. Heaving the stock muffler into the sea, and losing that unpleasant number-plate-and-blinker holder hovering over the back wheel, would improve its overall looks out of sight. And yes, I was one of those people sawing all sorts of unsightly stuff off the old Katana, too. So I’m pleased Suzuki has given people like me something to work with.

There is a plethora of well-considered and subtle styling touches all over the Katana. The sculpting on the tank, the neat way the back-end is finished off, the little dimples on the fairing, and the sexy-as headlight (works pretty well, too), combine to create quite a stand-alone motorcycle. I spent a month with it. I looked at it long and long, in all types of light and at every angle. And when I had to hand it back, my garage was lesser for the emptiness it left. I’d really come around to the new Katana. It was different, it was new, and because it made a few people crazy with denial, only made it that much more appealing to me. I’d certainly change a few things on it, but the end result would be something quite special, I reckon.

But when the dealing’s done, and it’s time to count your money and leave the table, looks are very subjective. You’ll like the way it looks or you won’t. Its appearance has no bearing on how it rides – and it rides brilliantly.

It can’t not ride brilliantly. It is, as we have seen, a GSX-S in fancy clothes. And it is very much, and thankfully, a thoroughly modern motorcycle.

The seat is wonderful. Slim and tapered at the front, so you can move around as much as you like when you’re getting your Rins on. The pillion accommodation is also reasonable, and light years ahead of the rubbish my old girlfriend had to sit on back in 1982. The riding position cants you a touch forward so when you’re being all aggressive you don’t feel or look silly – and it is by any measure a hugely comfortable bike to ride, long or short distances.

The motor is the indomitable long-stroke version of K5-K8 gen of Gixxer hearts, and its longevity and beautness is well-known and appreciated. It’s a wonderful, hard-charging engine, thick with grunt in the mid-range, and offering 150 horses and 108Nm of torque. And since its output is not mitigated with a ride-by-wire throttle, the Katana can really be enjoyed by people who know what they’re doing and like a more direct connection with the engine.

It also has a low-rev helper to stop you stalling and dropping your bike outside the coffee shop. This helper, I feel, could have been left out by Suzuki. Let’s face it, 215kg wet is not that heavy to pick up, and I greatly enjoy motorcycles falling on idiots who have stalled them because they cannot sync the clutch with their throttle input. Suzuki has changed the throttle cam for the Katana from the GSX-S unit, to maybe smooth the bang from a closed-throttle. I never noticed this on the original, and I’m just telling you it’s there.

At touring pace, the engine is deluxe smooth, the gearbox is Suzuki special as always, and the slip-assist clutch very welcome and effective. 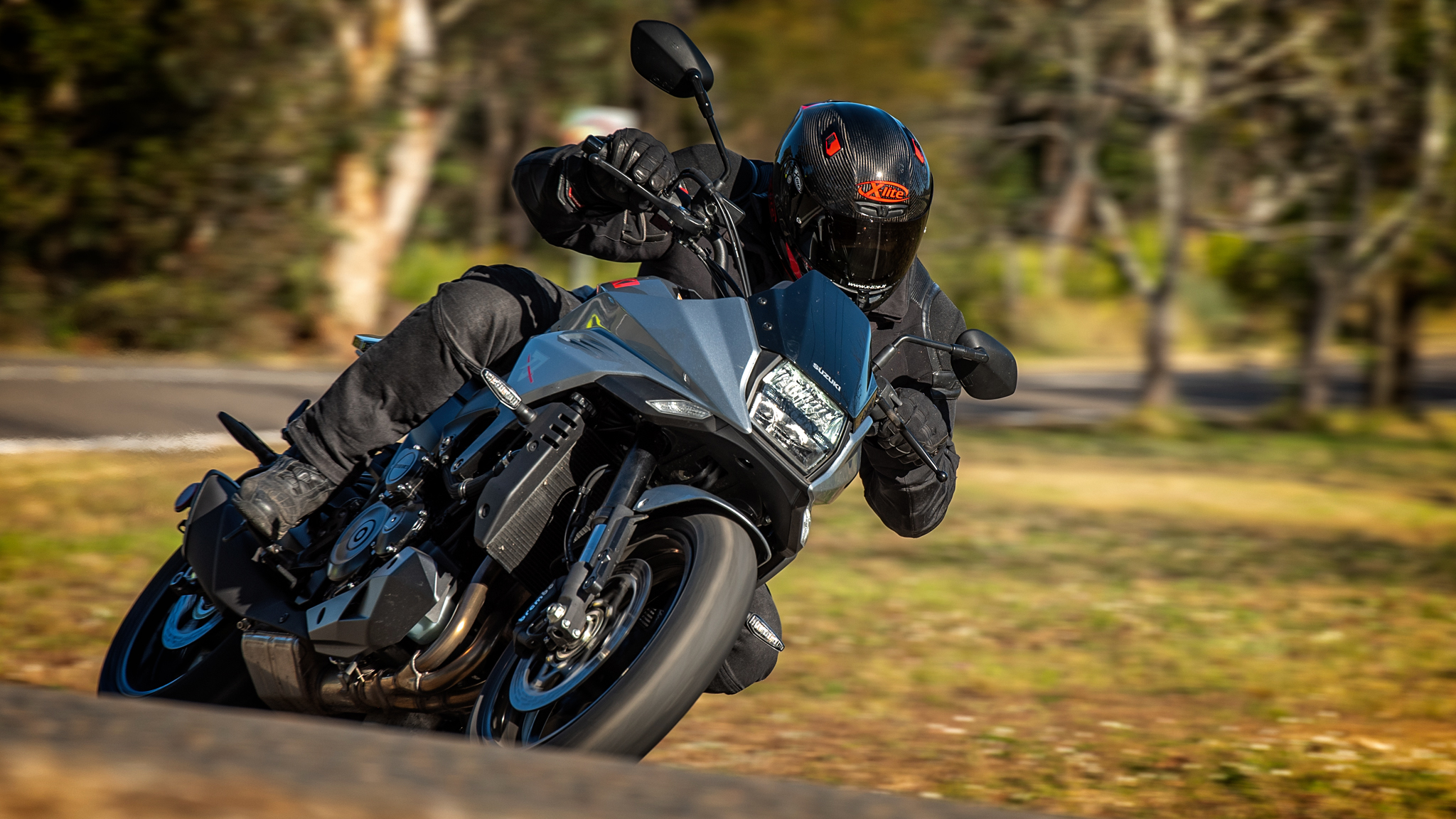 One would have to be nit-picking to find a fault with the Katana.

So how about I pick some of those nits, and maybe slap a few some others may have picked.

There has been a lot of whinging about the fuel capacity. There’s 12-litres, which is 10 down on the original bison. You will get 200km out of a tank – unless the racing is protracted and feral. Then, maybe 180-190-odd. I don’t have an issue with that range, given I’m used to stopping every hour or so anyway. If the fuel capacity bothers you, it bothers you. Buy a different bike. Jesus…

The TFT dash was, I felt, a bit chaotic. Maybe it’s a matter of getting used to it all. Maybe it’s the segmented numbers. Maybe it’s my age. It’s hard to say, but it’s no biggie. All the info is there, you just have to get used to seeing it, I guess.

The fully adjustable suspension was perfectly pegged for normal riding after you tweak it a bit for more pre-load front and back. But on general principles, both it and the Brembo brakes (straight off the current GSX-R) are just fine – with the latter offering good feel, even under hard load. And I’m a hard load, for sure. 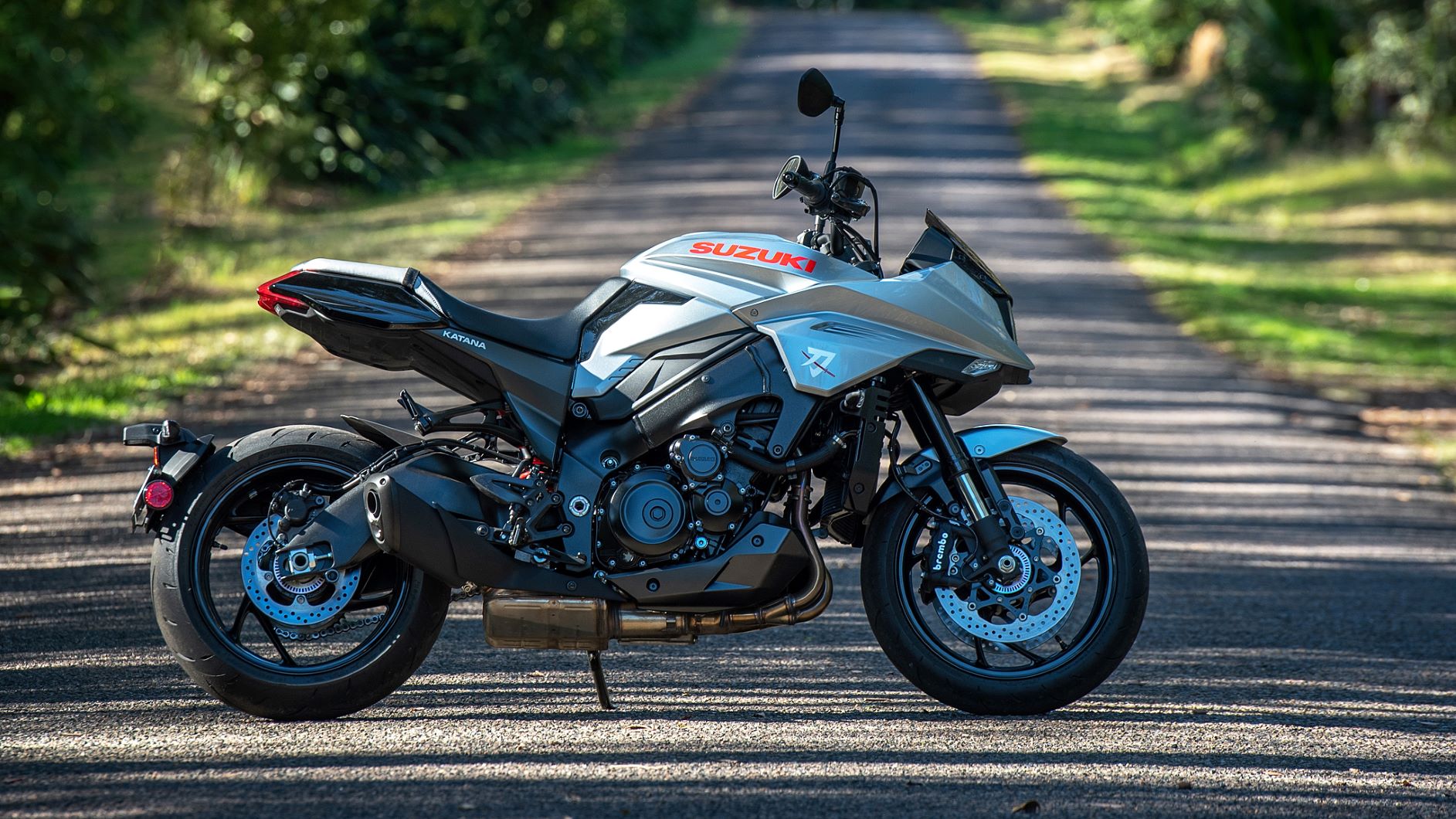 Riding the package proved to be pretty cool. It felt a bit special. Probably because it is a bit special. It’s a Katana, after all. People gathered around it wherever I parked. One bloke even asked me if the “controls fall easily to hand” and we both laughed. No-one actually said anything negative about the bike at all, and in fact a few people changed their minds when they saw it being all silver and nostalgic in the sun. I’d probably buy the black one, but. It’s got an added element of nasty in that shade.

And speaking of nasty, I’m hoping, and hearing things. Things which involve Mr Phil Tainton maybe taking one of these into his Cave Of Happy Evil and then wheeling it out again so we can all moan in desire and awe.

But whether that happens or not, I think Suzuki has done an excellent job re-incarnating one of the most iconic motorcycles the world has ever seen.

The world is of course a very different place to what it was in the Eighties, and many of us who are of that vintage still see the world through that older prism. I try not to. I don’t always succeed. But I still try. At first glance, the Katana did not press the buttons the old Katana did. But after a time, and on reflection, I realised those buttons were the buttons of a young, wild-eyed, know-nothing, who was easily gawked-out by anything out of the ordinary.

I know more things now. I don’t impress that easily. I looked at the new Katana through older, wiser eyes. And I realised that I liked it very, very much – precisely because it was not the original Katana.

I guess there’s still room in my heart for a Katana, and I’m very pleased there’s a new one to put there.