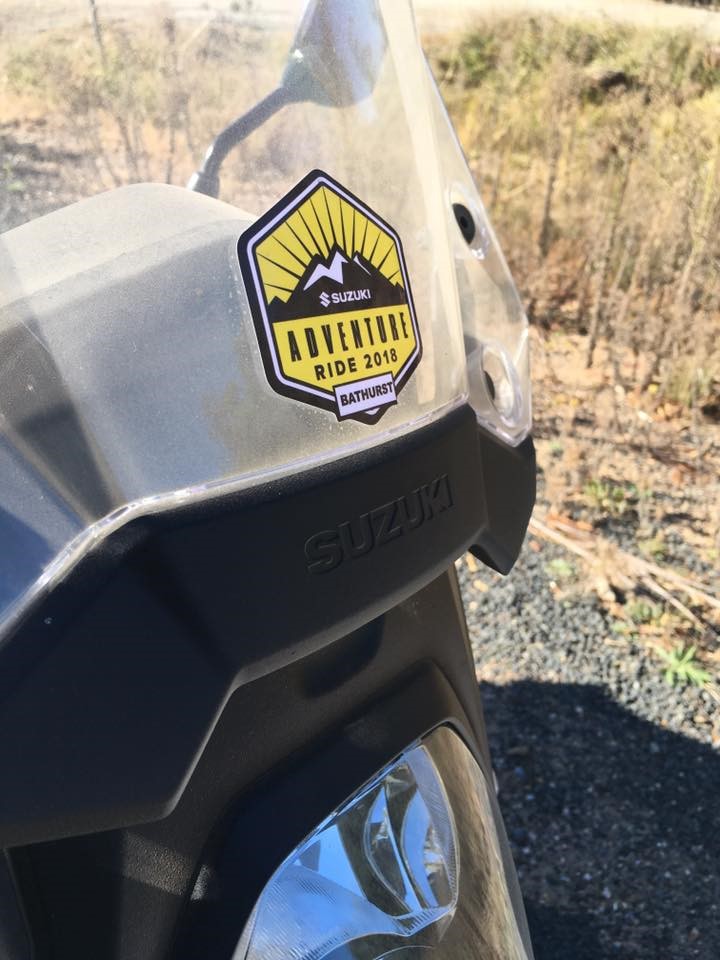 I saw it on the Internet. On Facebook, actually. Suzuki was having an Adventure ride around Bathurst and it was inviting people to come along.

If they were so minded, they could:

And, unlike some other manufacturer-organised events, this one cost absolutely nothing.

Sure, you had to book your own accommodation and feed yourself, but I have not needed anyone to chew my food for me in a long time. I actually liked the independent angle of the deal.

Suzuki, for its part, would provide Shawn Giles to plan and lead the ride, and a host of Shawn’s mates – all large, friendly, capable country blokes who exude top-notch dirt-riding ability – to ride herd upon the participants and ensure our well-being.

And I also knew this ride, being what it was, was not going to be of a degree of difficulty which would see me being choppered out of the wilderness at some stage. There would be quite a few dirt riders even more crap at dirt-riding than me, and there aren’t enough helicopters in Australia to rescue them all.

So while it turned out to be as challenging as I wanted to make it by twisting the throttle harder, it was perfectly doable by people with far lesser skills than my own humble abilities.

All of these aspects appealed, so I called Suzuki and asked if I could come along.

“Lewis,” I said to Suzuki’s wonderfully well-adjusted and even-natured marketing director. “Can I come on this adventure? I love adventure, me. I’m pretty much adventure incarnate. Ask the police.”

“We’d love to have you along,” Lewis said over the phone. I had no idea if he was lying because I couldn’t see his eyes. 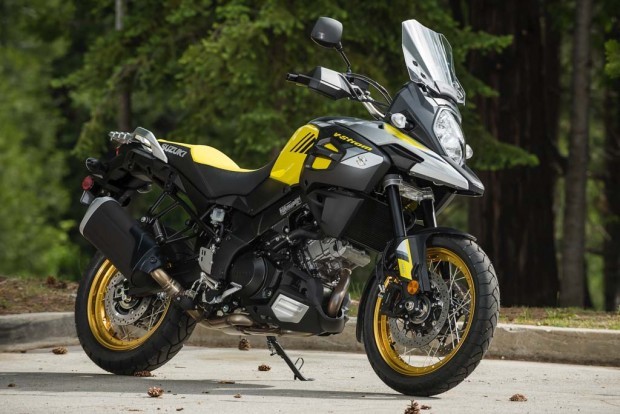 “Perfect,” I muttered to myself. “It can be seen from space and it will be lighter to pick up when I crash than the 1000.”

I’m a fan of V-Stroms. I took one down to the Island a while back. Raced some Ducatis on the Jamieson-Eildon road. Podiumed. Basked in the shame of the Ducatisti. They are wonderfully able motorcycles – comfy, well-mannered, reliable, and engineered with integrity. They surprise a lot of people. Especially if a crazy person is riding one.

I’m not as crazy as I was, but I’m still unhinged enough to warrant watching. 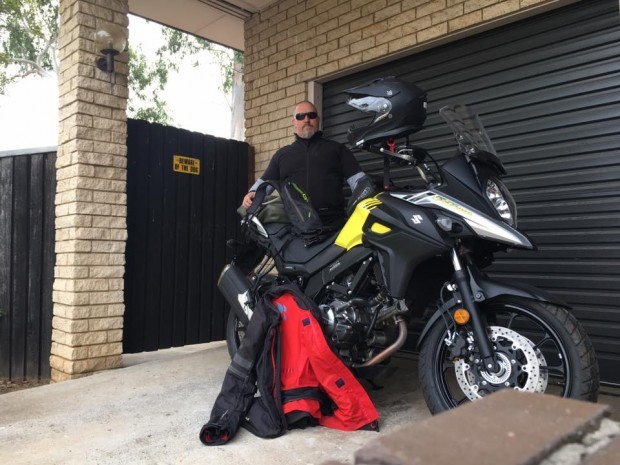 So on a cool autumn day, I set off for Lithgow – the meeting point of the adventure ride.

I planned to visit my mate Ian Anderson at the Old Zig Zag Brewery (Ian’s the brewer), drink some of his fine beer, eat some food, get a good night’s sleep, and be at Lithgow Maccas to kick off at 8am. Riding the Bells Line of Road at 6am in autumn is a game for black-ice-loving fools. Eating the Zig Zag Motel’s lamb shanks and washing it down with the Ian’s beer is a far better preparation for the ensuing adventure. 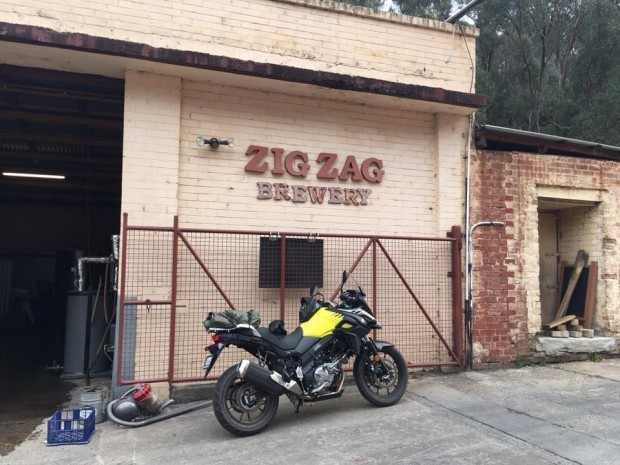 I was amazed the following morning to behold some 60-odd people assembled at Maccas. They weren’t all Suzuki riders, either. All the brands were represented.

The only thing they all had in common was the cold.

There was ice on my V-Strom’s seat and my weather app was saying it was minus four but felt like minus seven. 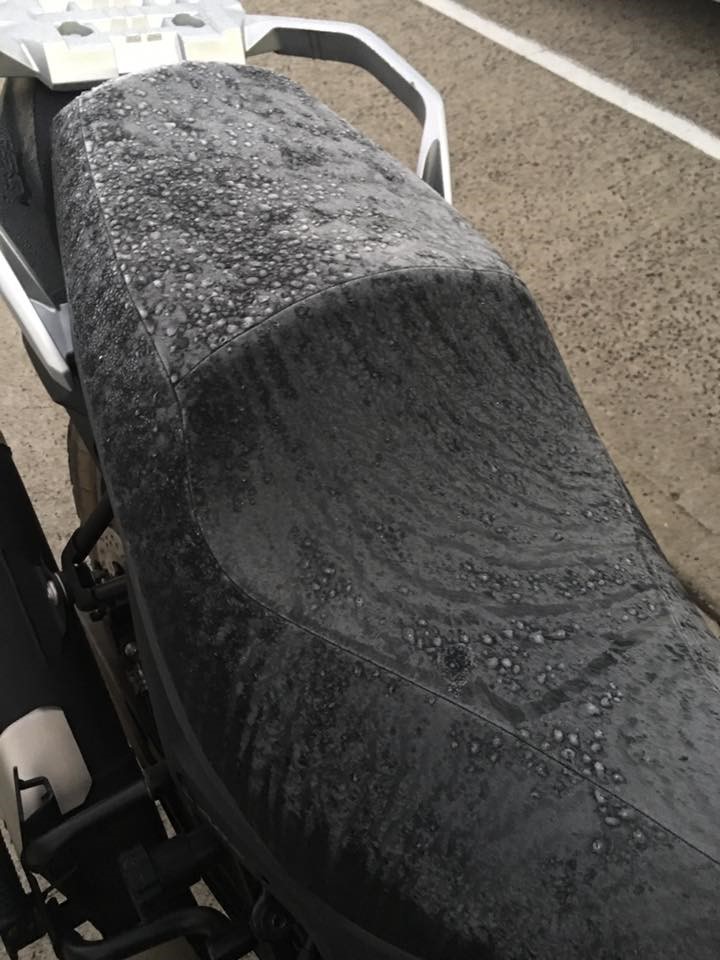 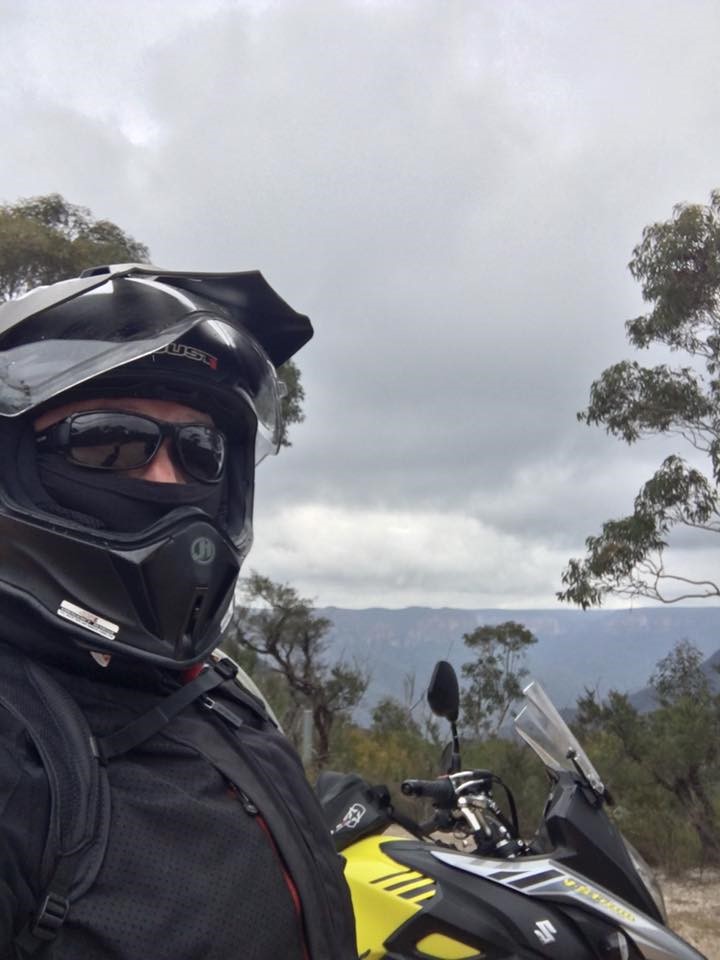 I didn’t care. My days of suffering climactic assaults because of shit riding gear were long gone. My gear was good. I was ready.

And following a brief riders’ briefing by Shawn, which included a precis of how the Corner Man system worked and a polite insistence that none of us die and complicate everyone else’s lives, we set off. 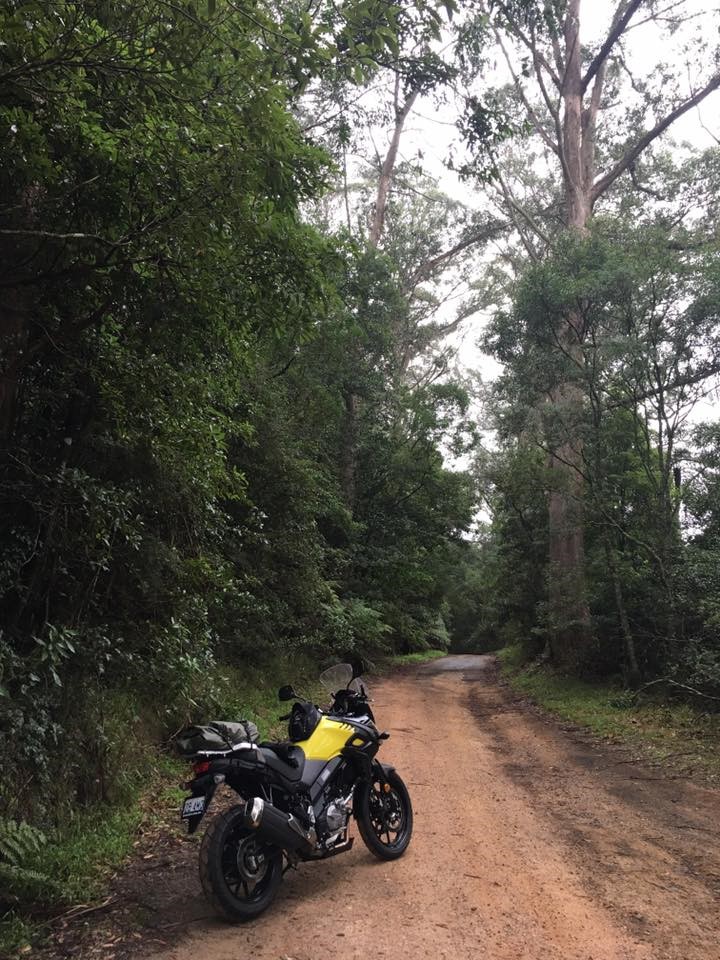 Because the group was so large, with a sizable contingent of DR-mounted desert-racers, ridge-climbers, rock-hoppers and river-forders, Shawn (who is local to the area) opted to take this harder core of riders on a…well, edgier ride.

Somehow, this was decided that morning in the car-park, a new route was formulated for them, lead riders and sweeps appointed, and the whole thing proceeded without a hitch.

My initial terror at riding in large unknown-to-me groups abated, as the group I was in headed vaguely off in the direction of Hartley. Most of them appeared to have a relatively frim grasp on the riding concept, so it was a nice change from the usual Facebook-driven ride groups.

Nearly all the roads we did were familiar to me. Some sections more than others, but they were all either scenically splendid, a joy to ride, or both at the same time. Mr Giles could certainly carve out a career for himself as a tour guide.

There weren’t really any major incidents. A flat tyre, a bloke sailing off the dirt and onto the highway without noticing a Commodore bearing down on him (the shit you see when you’re corner-marking), a few small get-offs here and there (Maybe three all weekend, which is pretty good for more than 60 riders), none of which required hospital or evacuation. 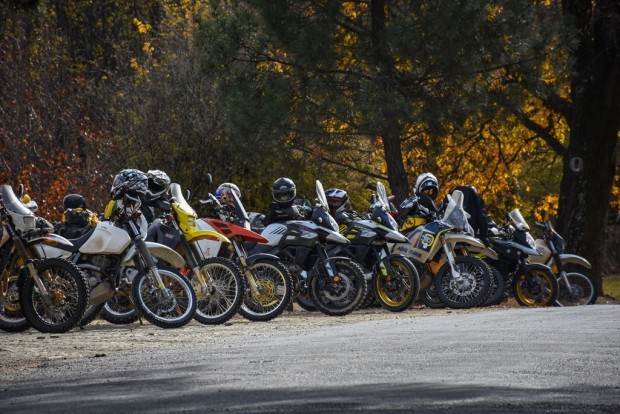 For me, the highlights were as follows:

Just riding anywhere near Peter Vorst, who came along on a pint-sized Honda 230, and just lashed the wee bastard like a rented mule all day. It was a pleasure to behold him bang.

The magical descent just north of Dog Rocks near Essington and Wisemans Creek was great. Nice, open corners, great vistas, unfenced bulls, enough dust to drown the world…the drought was in full swing out this way, so there was lots of dust everywhere. This actually added to the thrill.

The run out of Wattle Flat and into Limekilns and then to Turon gate was sensational. Especially all the marsupial corpses obscured by thick clouds of dust. I really enjoyed not hitting them while riding blind. 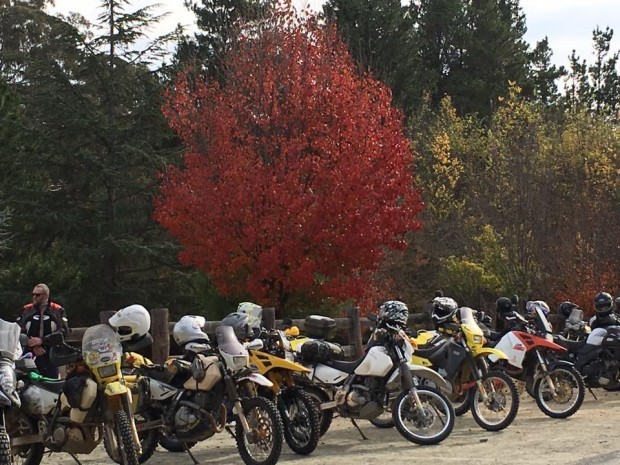 Happily, I retained enough vision to enjoy seeing the mad, prehistoric-looking Turon River idling beside me as I made my way to Capertee.

Shooting the shit with many of the participants was lots of fun. Good-natured and well-disposed people each and every one of them. Some were hard-core adventure beasts, others had never ridden dirt before, but it was clear they’d had such a great time, they would certainly be doing it again.

I guess that’s the real meat of this type of riding – it’s got to be challenging enough for you to tell stories about what happened, but not so daunting as to put you off ever trying it again. Gilsey’s routes were spot on in that regard – things to see, obstacles to conquer, and tales to tell afterwards.

I have nothing but praise for the V-Strom 650 and 1000. They have a cult following of tragics who love them dearly, and that’s quite understandable. You are getting an awful lot of motorcycle for your money. They’re easy to ride, they make no untoward demands on you physically – the ergos are neutral incarnate – and they are simple, honest, and unburdened by overwhelming technology. And they are easy to ride. 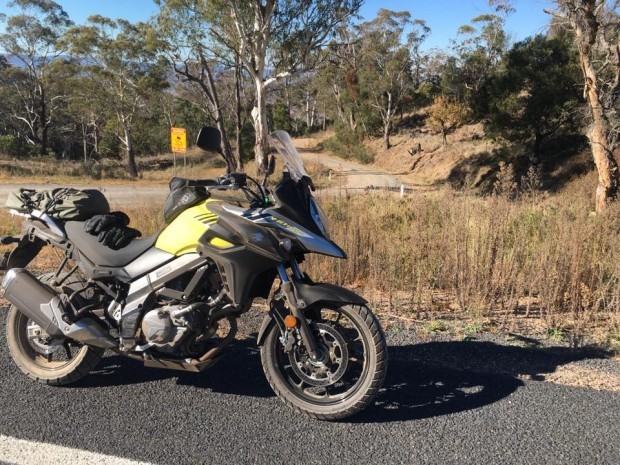 The 650 I was on had two levels of traction control, which I turned off and never turned back on again. I was on dual-purpose tyres (Bridgestone Trail Wings), which coped fine with the mainly dusty and sometimes very corrugated conditions and let me lash out a bit on the bitumen sections. Yes, like I’m going to let the famous Duckmaloi MotoGP track just sit there and taunt at me.

The seat is not very high, there’s a rack on the back to tie things to, the fuel tank is big and the engine is frugal.

Many riders rode the dirt sitting down, but I have been unable to do that since Miles Davis explained how things work to me a long time ago. It was confronting to stand up at first. Now it’s normal. I am happier standing and feel weird sitting. You are free to do as you please. 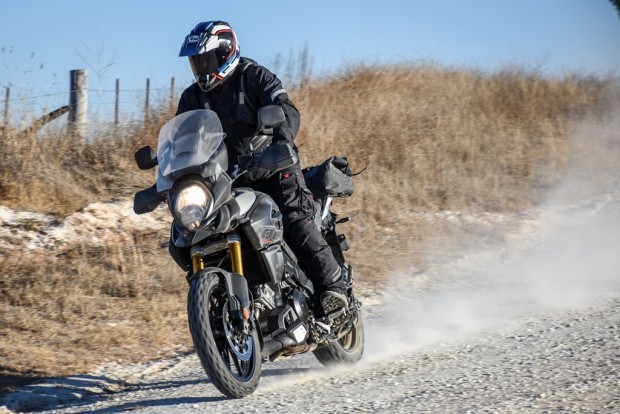 I think I would like the handlebars on the 650 to be tad higher for when I’m channelling Toby Price, or I may just need to adjust my style. I’m not sure. The bike itself would happily chug up steep, rutted hills in third if I forgot or was unable (due to terror) to change down, and it had very good engine braking for steep descents.

I could not have asked for a friendlier or more obliging mount.

So you can have two versions of the 650 (and the 1000). There’s the base model ($10,990 plus ORC) which I was on, and the XT ($11,990 plus ORC). The XT gets wire wheels, hand guards, and under-engine protection – it’s a bit flash. Both bikes have all new traction control systems, 60 new engine components providing more torque and better fuel economy (easy 300km-plus), new instruments based on the current V-Strom 1000 (but you won’t even see the little numbers and letters when your world is a dust bowl and you’re mostly blind), a new beak design based on the DR-BIG, a new 12V power socket, and finally Suzi’s beaut Easy Start System and Low RPM Assist – which is why it didn’t die when I lugged it up those hills in too high a gear. Yes, it is markedly better than last year’s jobbie. 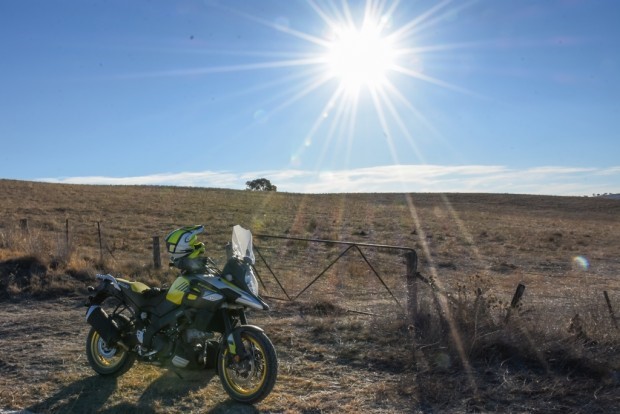 I can quite recommend the routes we took – they were 70-percent dirt and 30 per cent tar. They were also scenic, splendid, and as challenging as your right hand wants to make them. They’re also perfectly doable even for a base novice, and if you don’t mind some washboard action, most road bikes could cope OK. Certainly, they are made for bikes like the V-Strom. So plug the following into your Googler. 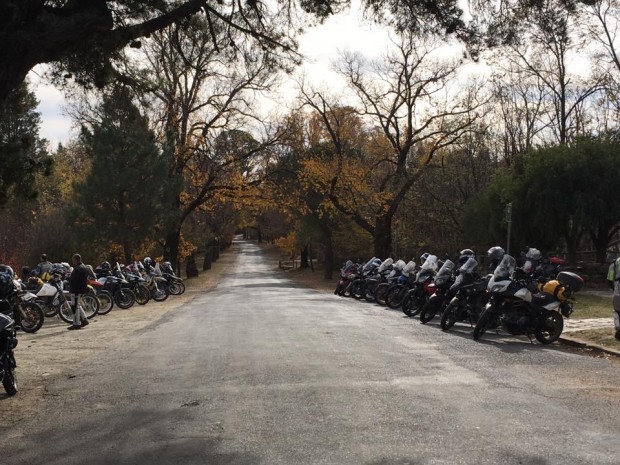 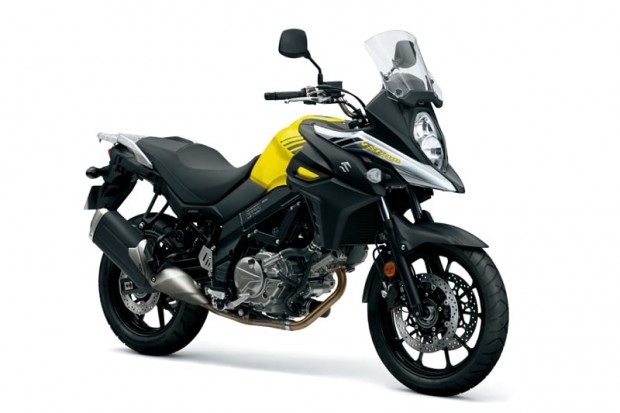