Certain man-giblets I have start gronking whenever turbocharging becomes involved in a motorcycle.

The Hell-Snail and I have some history.

I rode the first turbocharged Harley in Australia.

This was back in my Ozbike days when in lieu of paying advertising bills, advertisers would give us things. I got tattoos. Keetsy, Ozbike’s advertising manager, got a turbo bolted to his Softail.

The Lord truly had mercy upon us all and the engine exploded 3000km later, which was right about the time Keetsy and I were starting to get complacent about riding a bog-stock Softail with a turbo on it. Complacency was not a good thing where that Softail was concerned. It ached to kill us.

Years passed, and the next time terror liquified my gizzards was thanks to Snake from S&R Speed Pro, who had caused a 600hp Hayabusa to be.

He let me ride it around some back roads and Ken Wootton published the results in AMCN.

What my research has shown is that bang-for-buck, nothing beats turbocharging. Horsepower can be doubled, tripled, and quadrupled for the price of four high-level call-girls and a goodly bag of Bolivian dancing talc.

But with great power there often comes great pain.

Bikes not equipped to deal with a doubling of power and torque will often surrender like the Germans at Stalingrad. There will be tears, recriminations, and despondent looks. Things will fail. Things that would never fail if the bike was left alone will let go – often with some decorative smoke, hot oil, and clunking noises.

So that is the challenge facing anyone who bolts turbos to bikes.

And this was the challenge facing Justin Chisholm, the owner of Trooper Lu’s Garage. I could sense it in his voice when he called me one evening…

“I’m going to get Ben Shaw to turbocharge a Niken. Then I’m going to put dirt tyres on it. I also want to paint it something crazy, something special,” he said.
“Listen to me,” I said. “I know everything about turbos, and I know lots about painting shit. Paint it matte black. Put racing slicks on it. Hand-cut some tread in them with a Bowie knife. I’m coming over now to film it all.”

“I’m not ready yet!” Justin replied.

“That’s the best time to do these things!”

But of course it wasn’t.

Still, Justin does not sit on his hands. He’s like the Energiser Bunny, but with tattoos. He makes things happen. Quickly. I am a little in awe of him because I procrastinate, and people like me look at people like him as if they are from another planet.

We spoke a few more times in relation to the paint. Justin wanted it to be “All Desert Storm” and I think he wanted me to tell him that would be a good idea. He was going to do what he was going to do, but it is always healthy to have a partner in crime – especially paint crime.

To be honest, I didn’t think his paint scheme would work. I told him. But I am glad to be proven wrong. It is War-Beige and it’s spot-on.

The entire build is, in fact, spot on. 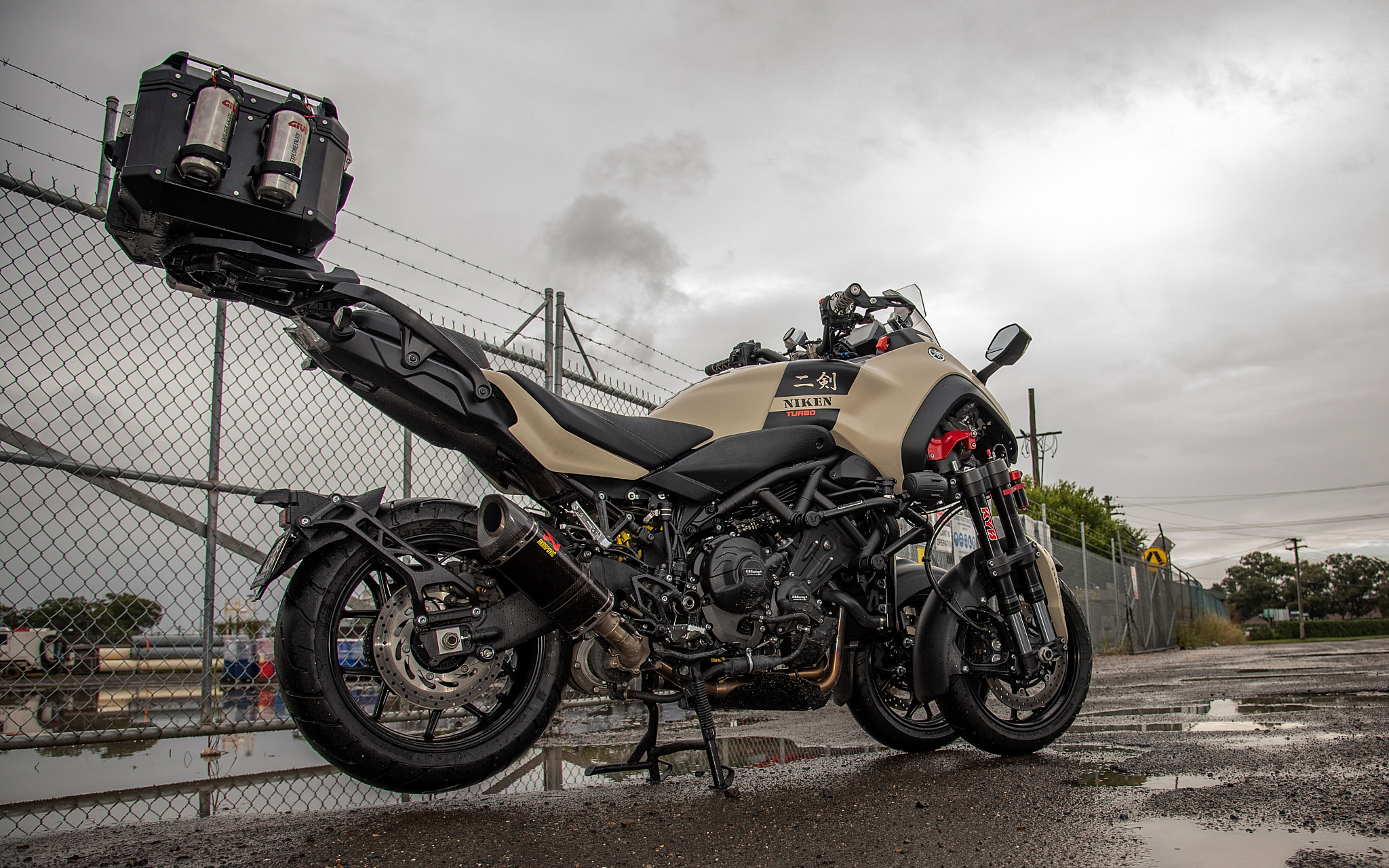 And I would make these observations before moving on, because I know you need to know these things.

The Turbo Niken sounds incredible. Full Akro systems will do that. Coupled with the stock quick-shifter, the music of its people is glorious.

The spotlights aren’t much chop, though the red jet-fighter-like deployment switches on the dash are trick as. You turn on the spotties at night and they light up the sides of the engine. Which is nice and pointless, I guess. Like a dancing owl. 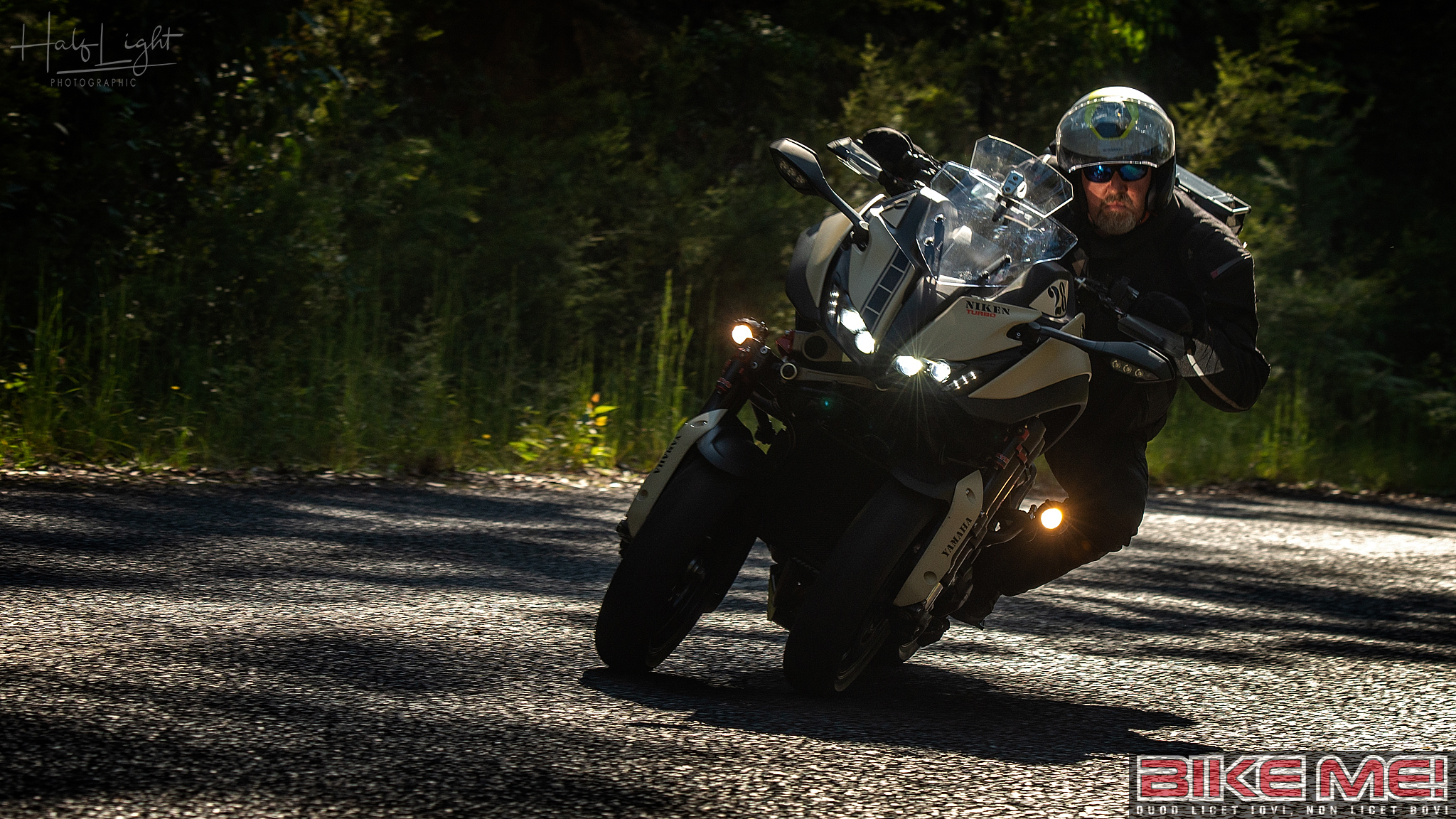 And that crazy, bulletproof Givi top-box, which I love like one loves that uncle who gets drunk at Christmas and takes his pants off in the kitchen. The top box lives in my peripheral vision all the time. A black presence that reminds me of bats. This is not something I am unfamiliar with, so it is not off-putting for me. A less seasoned rider may well freak out and hit a tree.

Ultimately and importantly, the Turbo Nike looks like it was made by the Yamaha factory…on a night when the bosses were out and the engineers were full of sake and bad manners, and didn’t want to be caught in the morning.

So its true nature is obscured by bling – very good, top-notch bling. It’s illusory in that regard. There is no obvious Hate-Snail. Unless you knew what you were looking at, you’d think it was just a fancy-painted Niken with lots of salty blacked-out bits. 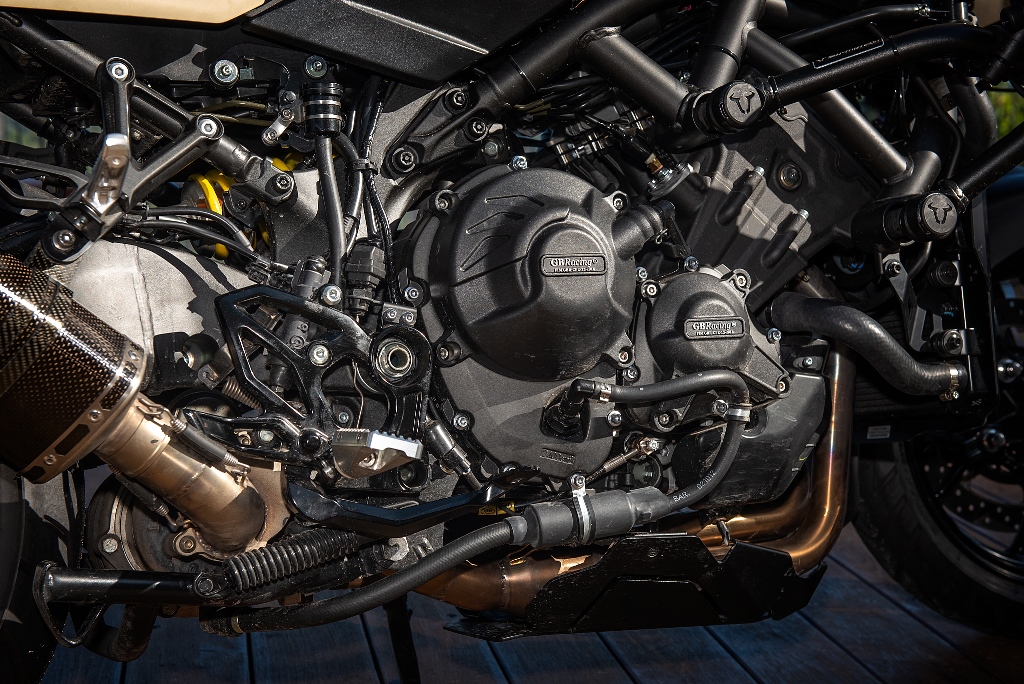 But when you look a little closer, you start to see things…

This is not an easy thing to achieve, as anyone who has built custom bikes will tell you. To create a custom motorcycle which looks like it was made by the factory is, quite frankly, the most difficult kind of build there is.

Justin has managed to pull it off superbly well.

The first time I took it out, it went so well it ate the stock clutch like a fat kid doing biscuits, ie. Quickly, efficiently, and with a bit of a smell.

Justin was mortified when I told him. He took it personally.

He is somewhat of an unmedicated perfectionist, so me nuking his new bike’s clutch was not so much a slur on me as it was on him.

“I knew I should have used the older, stronger clutch and put in heavier springs. These new MT-09 clutches aren’t as robust as the early ones,” he lamented.

“I could have not done burnouts,” I said.

“But you have to do burnouts!” he exclaimed.

I understood this concept. So I did them, three of them, and then called the ute to come get the Turbo Niken. Up until that time, the Turbo Niken was transcendental.

With the clutch now upgraded (it has a slightly heavier pull) it will do burnouts until the tyre flings itself into the trees.

It is transcendental once more.

Turbocharging increases torque as well as horsepower, and that torque increase is evident even off-boost. The Niken is more responsive, more willing…more everything.

But when the boost comes on (some six pounds of it) at about 7000rpm, you need to hang on. Seriously. Hang on. It is crazy good. 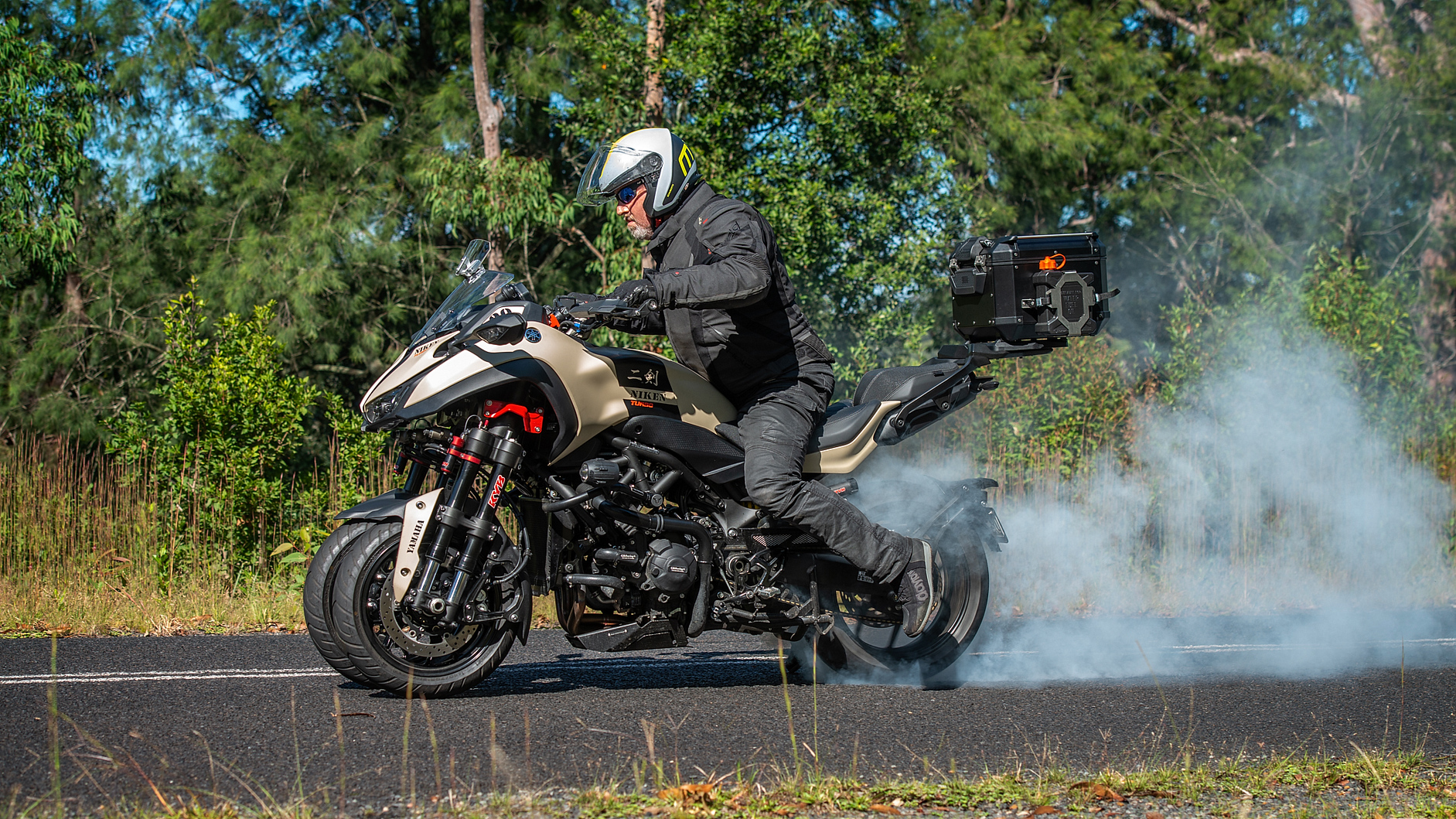 Justin walked me through the numbers while I wiped the speed tears from my eyes.

“The stock MT-09 engine makes 104 horses at the rear wheel. The turbo is a modified Garret GT25 320hp unit, which gives this Niken 150 at the wheel running six pounds of boost. It’s also oil-cooled with a remote pump.”

I held up my hand.

“Stop talking. I do not want to know how sausages are made. Only that they taste good.”

A stock MT-09-engined Niken is certainly lively enough. The fitment of a fizzing Hell-Snail turns that lively into savage intent. A man suddenly becomes very, very grateful for the immense front-end grip the Niken provides.

Justin anticipated the need for this gratitude. He modified the front-end by making two of the fork tubes into adjustable-volume air-springs with sub-tanks. It now feels even better. Even more planted and sure. Which is so important when the Hell-Snail is dancing. 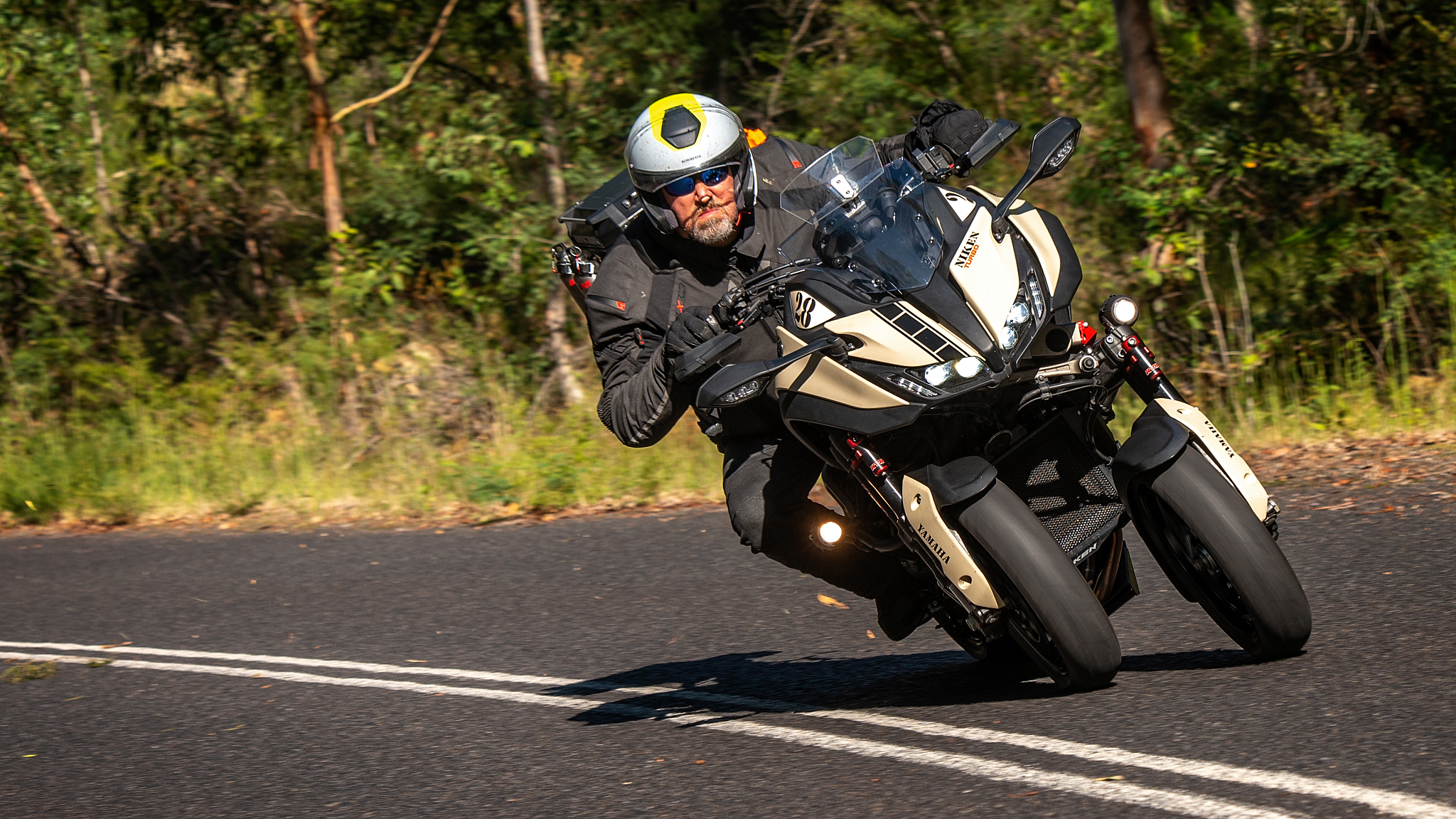 Ben Shaw did an amazing job, and quite rightly deserves the reputation he has for building forced-induction monsters.

The end result is really somewhat of a triumph – both in terms of concept and certainly in execution.

And the credit there is all Justin’s.

The applause is all mine.

Designed by Justin and painted by Lawrence at Collide a Scope in Hornsby.

All created and fitted by Ben Shaw at Extreme Creations

Rear shock – Justin says: “We like it as is – with a big load it could use a touch heavier spring but it’s very good.” He is saying this while looking at an Ohlins unit.

CLUTCH (after the first one)

Akrapovic headers and muffler off MT09 retro-fitted to suit turbo 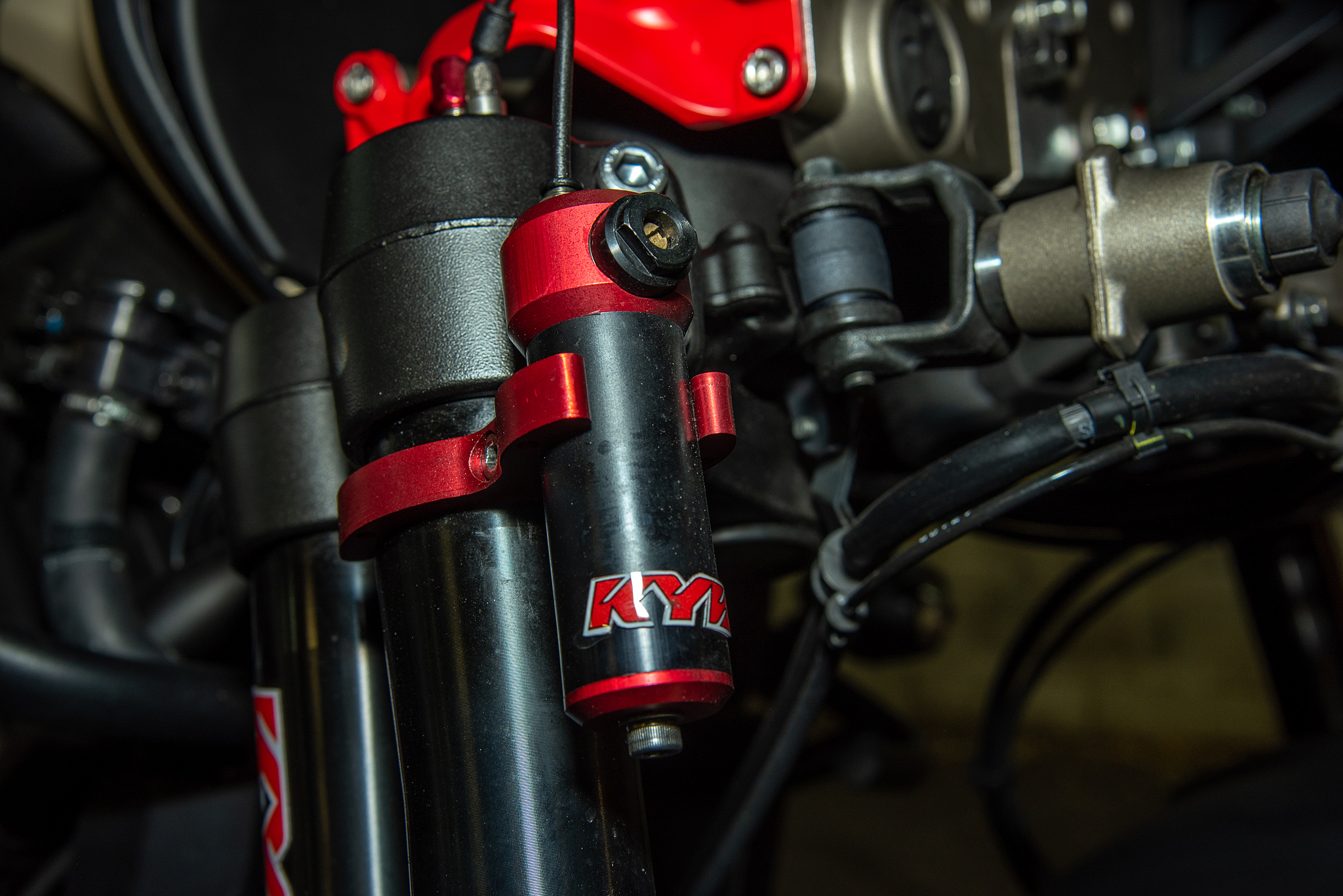 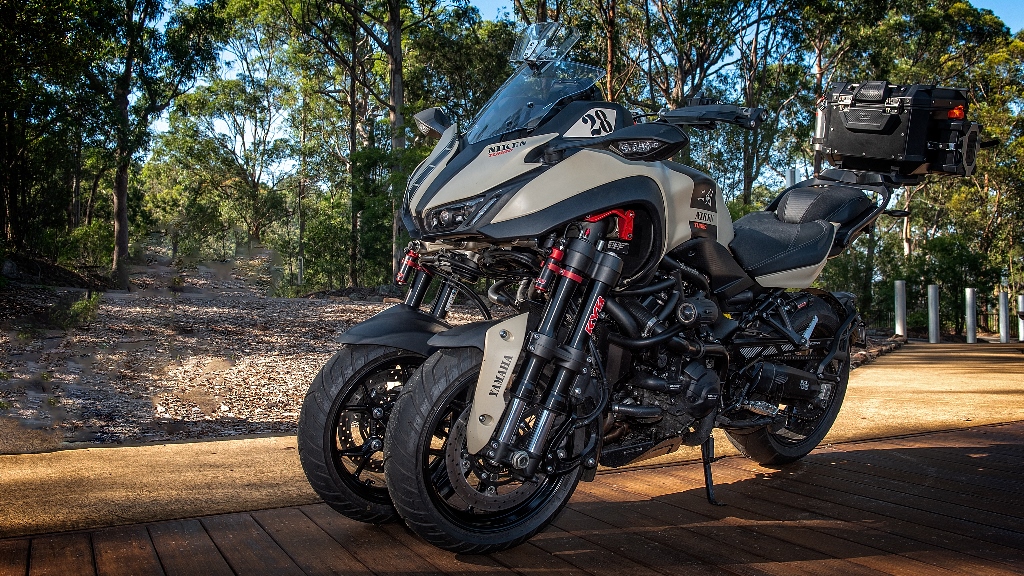 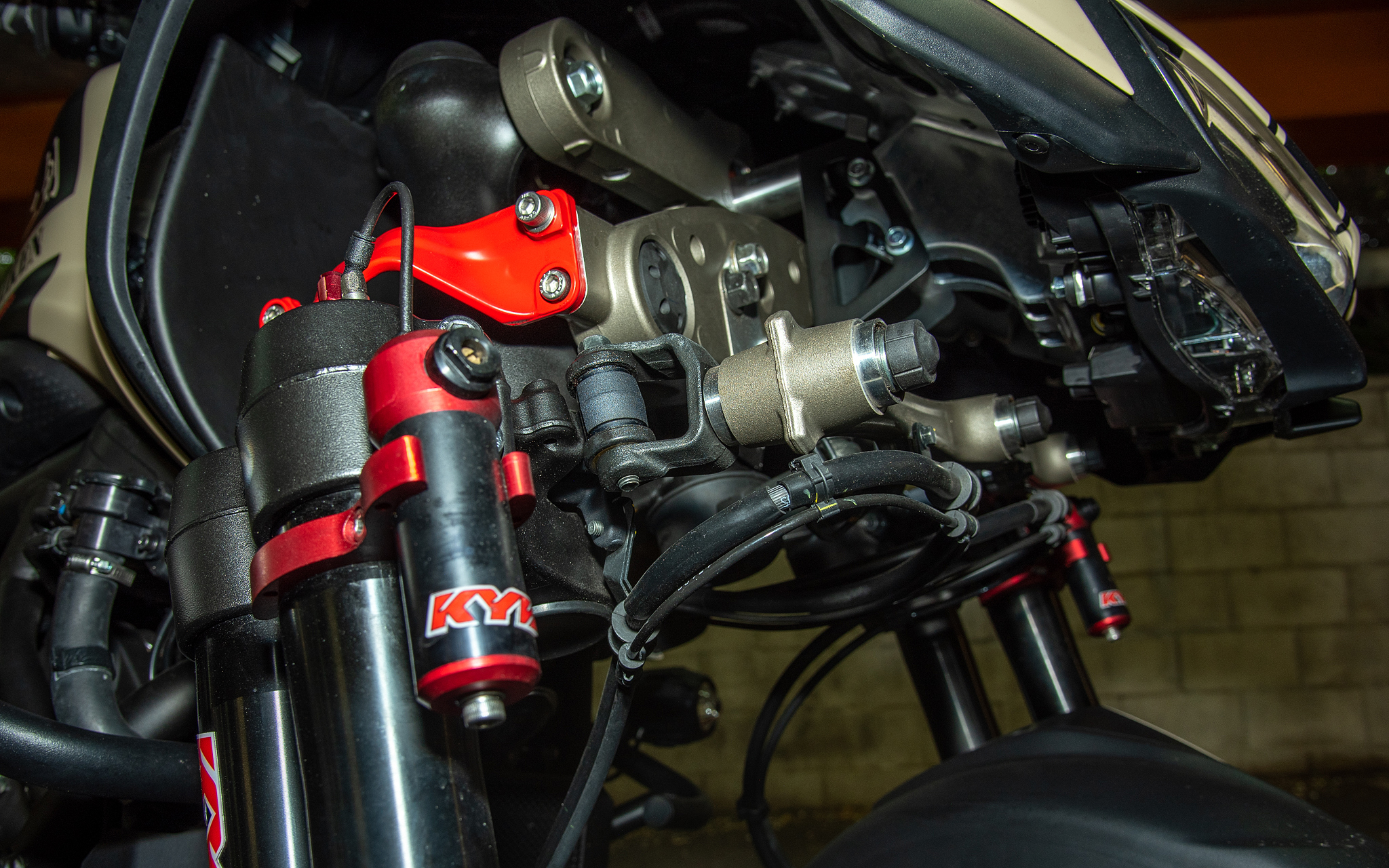 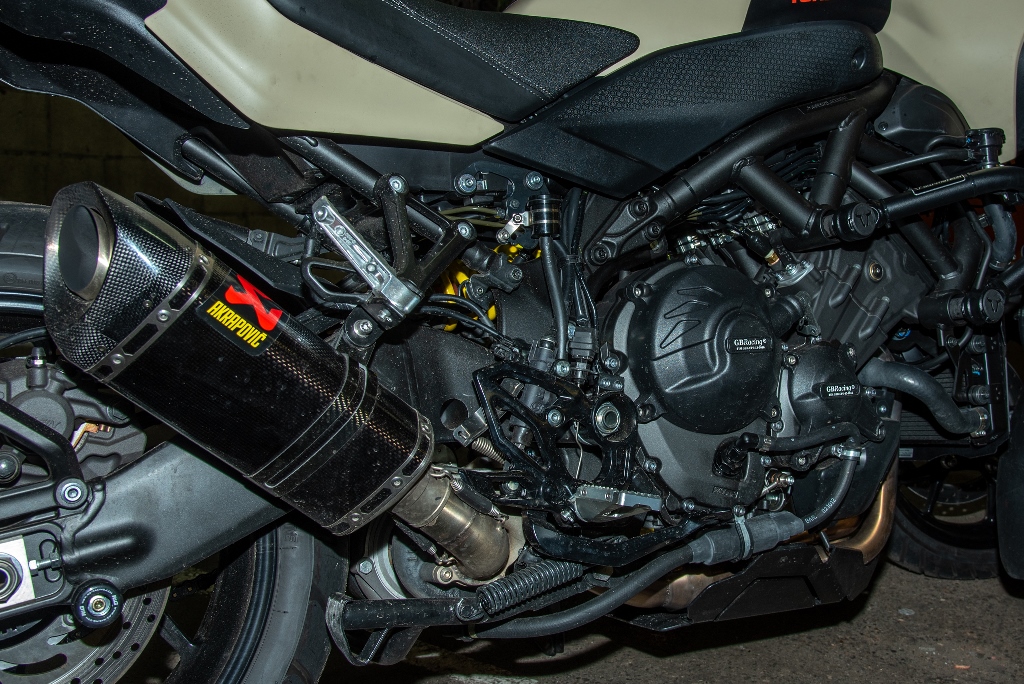