Wake Up To Yourselves – Austrian MotoGP with Tug McClutchin

The amount of shit that’s been written after the Austrian MotoGP that is putridly puerile has given me Asthma. Seriously. And I’m not denigrating the poor wheezing kids who actually have fucken Asthma. They are entitled to feel shit, and they have all of the sympathy I can muster, which isn’t much, because I have my own not insignificant alcohol induced medical issues. So screw them kids.

But I find myself feeling less of a man simply because of the amount shit written and spoken about the Austrian MotoGP. These MotoGP journos are embarrassing themselves. And don’t even start me on the retards on facebook. They’re next level morons.

And you know why they’re writing it?

It’s because they didn’t win 8 national 125cc GP titles on one continent in one year like I did. These idiots have no clue. It’s a disgrace. A disgrace smeared in its own shit. Like a retarded baby chimp in chimp creche, smeared not only in its own shit but all the other chimp’s shit, because chimps are more evolved than humans. When us humans sit and go, “no that poor bastard has enough issues, he has wiped his own shit all over himself, so I’m gonna leave him alone”, the chimps say  “Screw that freaky dude. Imma go wipe my shit on him like everyone else”. 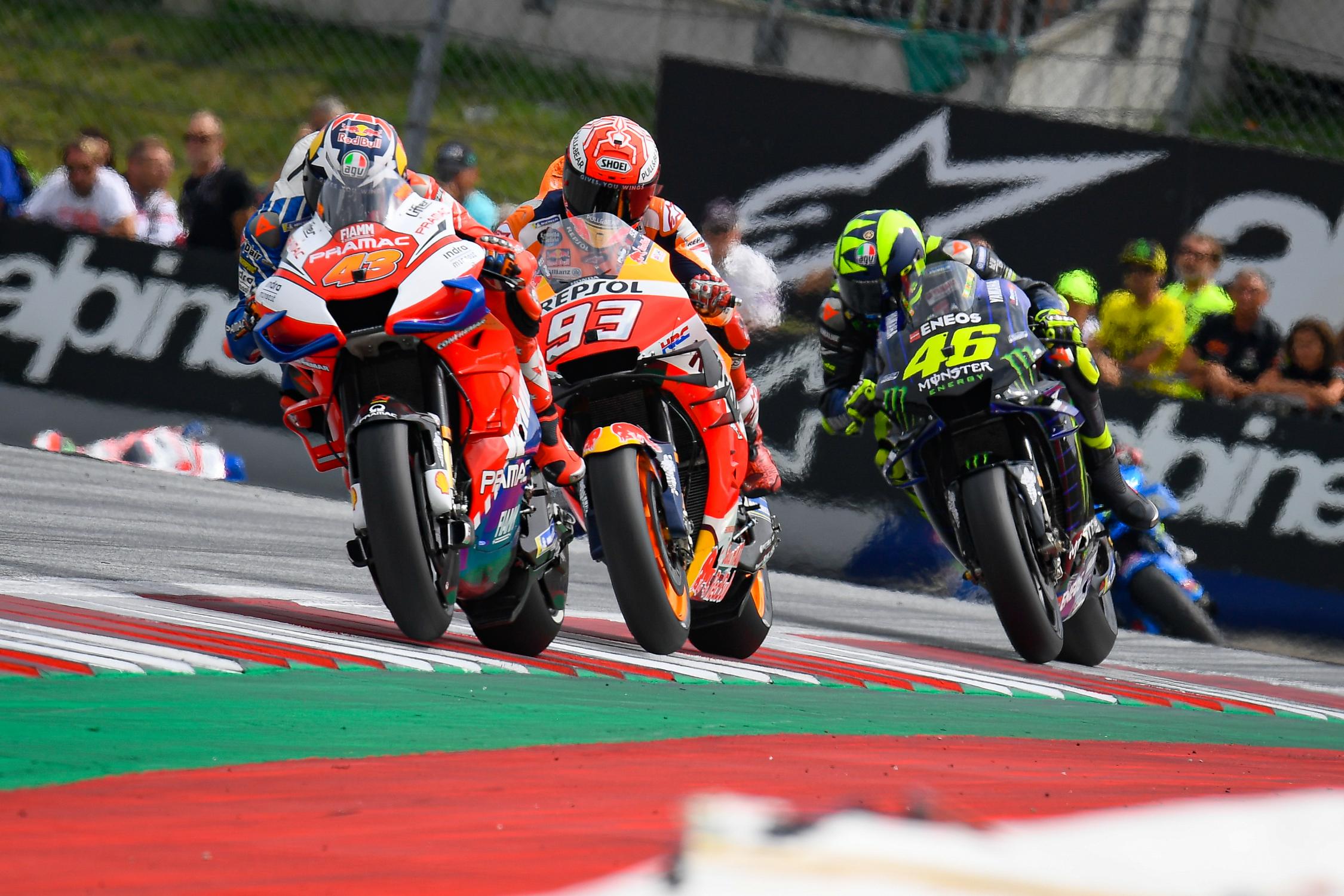 Jack started well. But he did have a point to prove

It’s kill or be killed, my friends. Racers are more evolved than humans. They are much more like Chimps than they are humans. So they will happily smear each other with their own shit.

Here’s what happened in Austria.

Marc probably picked the wrong rear tyre, but either way the Ducati was always going to be kinder to its rear tyre than the Honda at that track. 5 laps out, it was clear Dovi was going to win (you didn’t know that, did you? I did, but bear with me). Marquez had already lost grip on corner exit, and Dovi was playing with him. 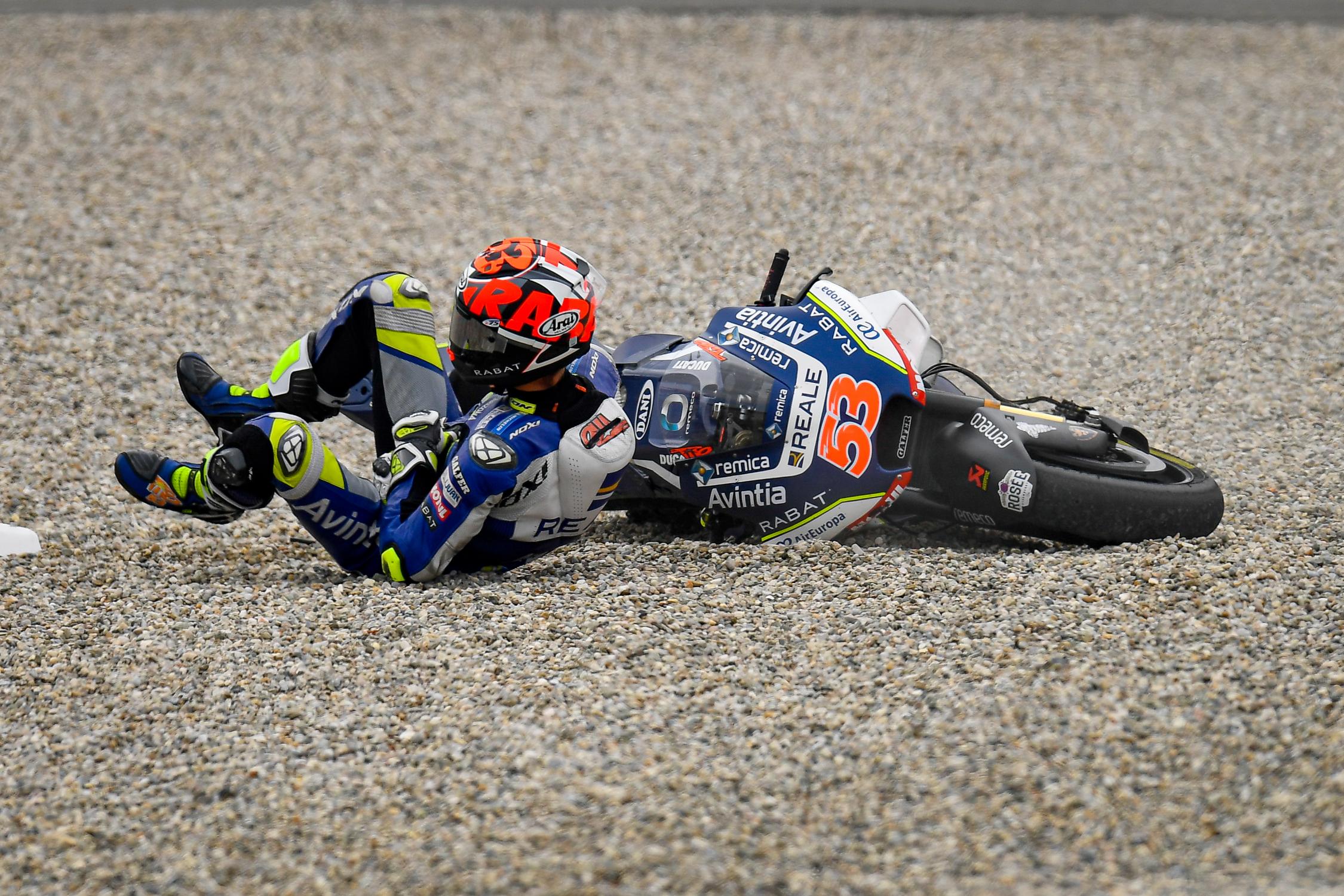 No idea who this is. Nobody cares either

You will remember that moment on the straight when Dovi pulled alongside Marc and Marc looked across at him? It wasn’t because Marc had suffered a sudden erection and needed some relief. It was because Dovi had pulled alongside and instead of going past he backed off the throttle, he just sat there, next to Marc, ensuring he had the inside line into the next corner. Because if if he’d gone past and into the lead, he’d have allowed Marc to then switch to the inside, and set the braking mark (which Marquez is exceptional at). But by sitting inside him and backing off the throttle, Dovi was in control of the corner. It was very good racecraft, and he did it a number of times. 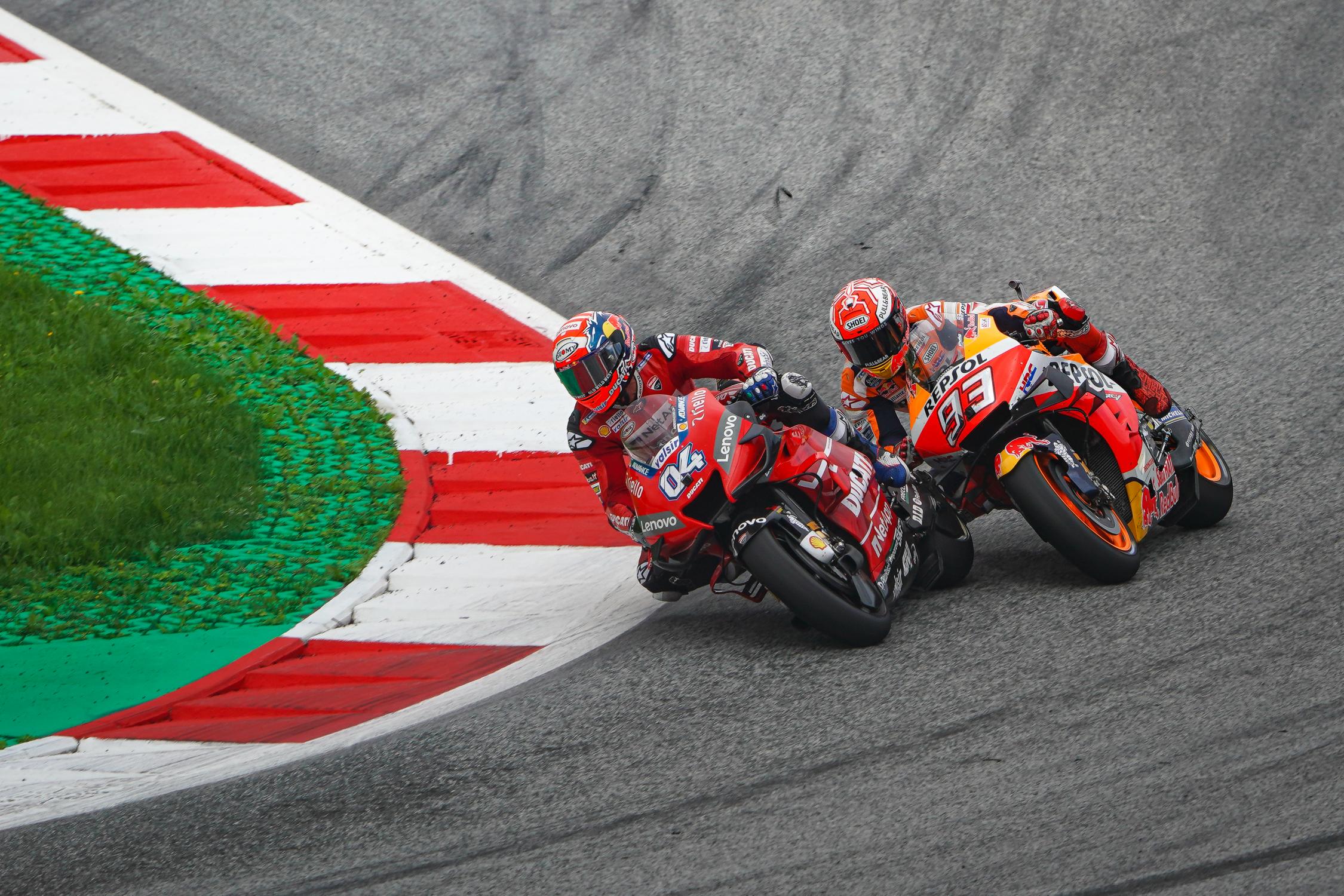 Marc was hung out to dry, and had to allow Dovi through.

It was the first time we have seen Dovi step up and ride like an arsehole. It makes me think he could one day be a title contender, even if it won’t be this year. It’s too late now. But if he can embrace his inner arsehole, he may one day have a chance. But I fear he’s spent too much time sticking his finger in his inner arsehole for it to make much difference now.

So for the next bit…. everyone is talking about the “amazing move” Dovi put on at the last corner. 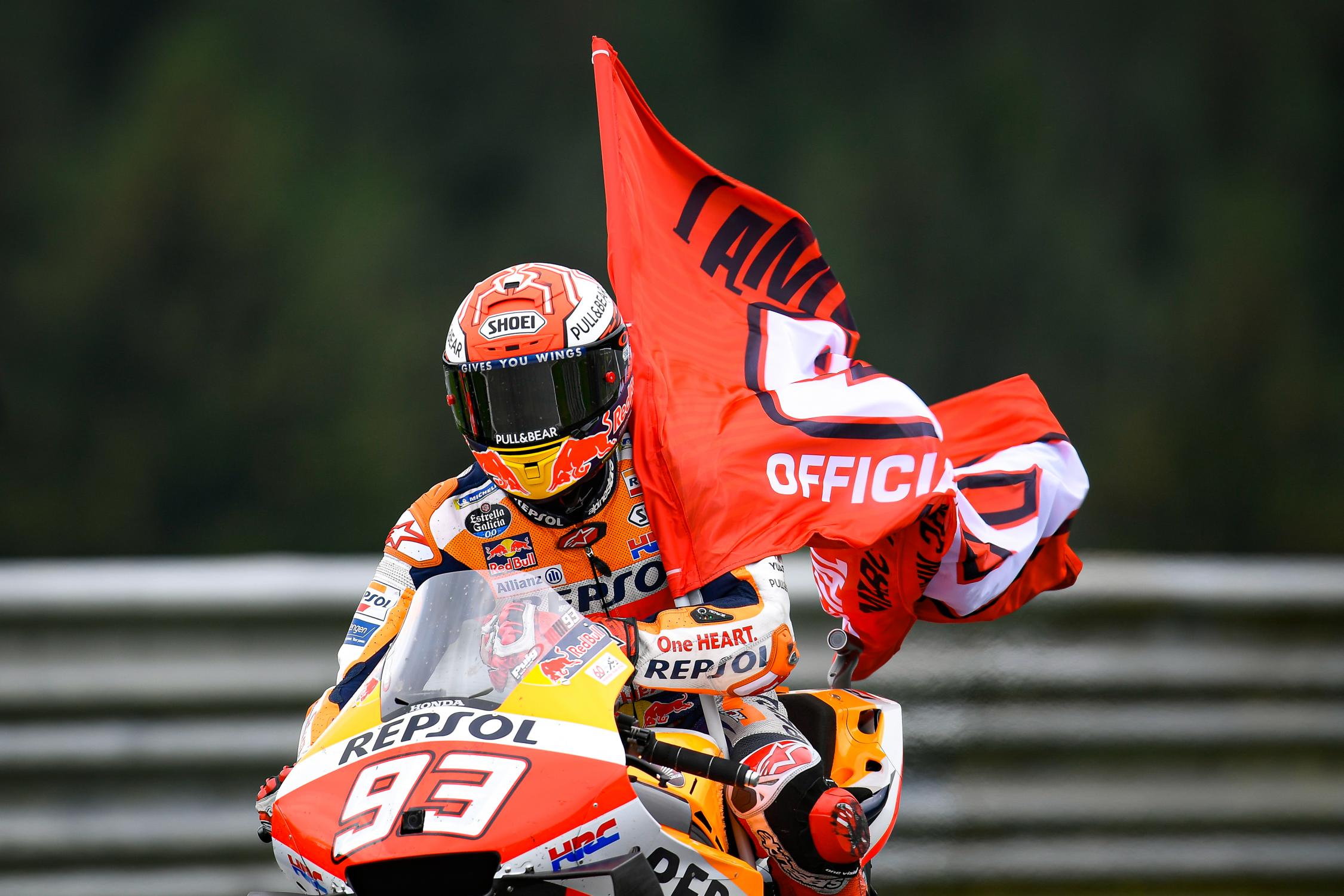 Happy with 2nd dudes. One step closer to championship number 173

It didn’t happen at the last corner, you idiots. It happened 4 laps before that. There’s a reason Marc led that last lap, and it’s the same reason Dovi let him.

They both knew, 4 or 5 laps earlier, that Marquez had no grip left in his rear tyre. It could have been a bad tyre choice, or it could have been that the Ducati simply uses tyres more efficiently on that circuit. Either way, both riders knew what was coming.

Marquez knew he didn’t have the rear grip to pull a move from behind to win the race on the last lap. He had to lead, and hope he could close every door possible. So that’s what he tried to do.

Dovi knew he had the rear grip to pass Marquez at any of 4 different points on the track, and if he’d been in front it would guarantee a banzai move from Marc that would have left them both in a gravel trap, so the best approach was to let Marc lead and pass him when it suited. 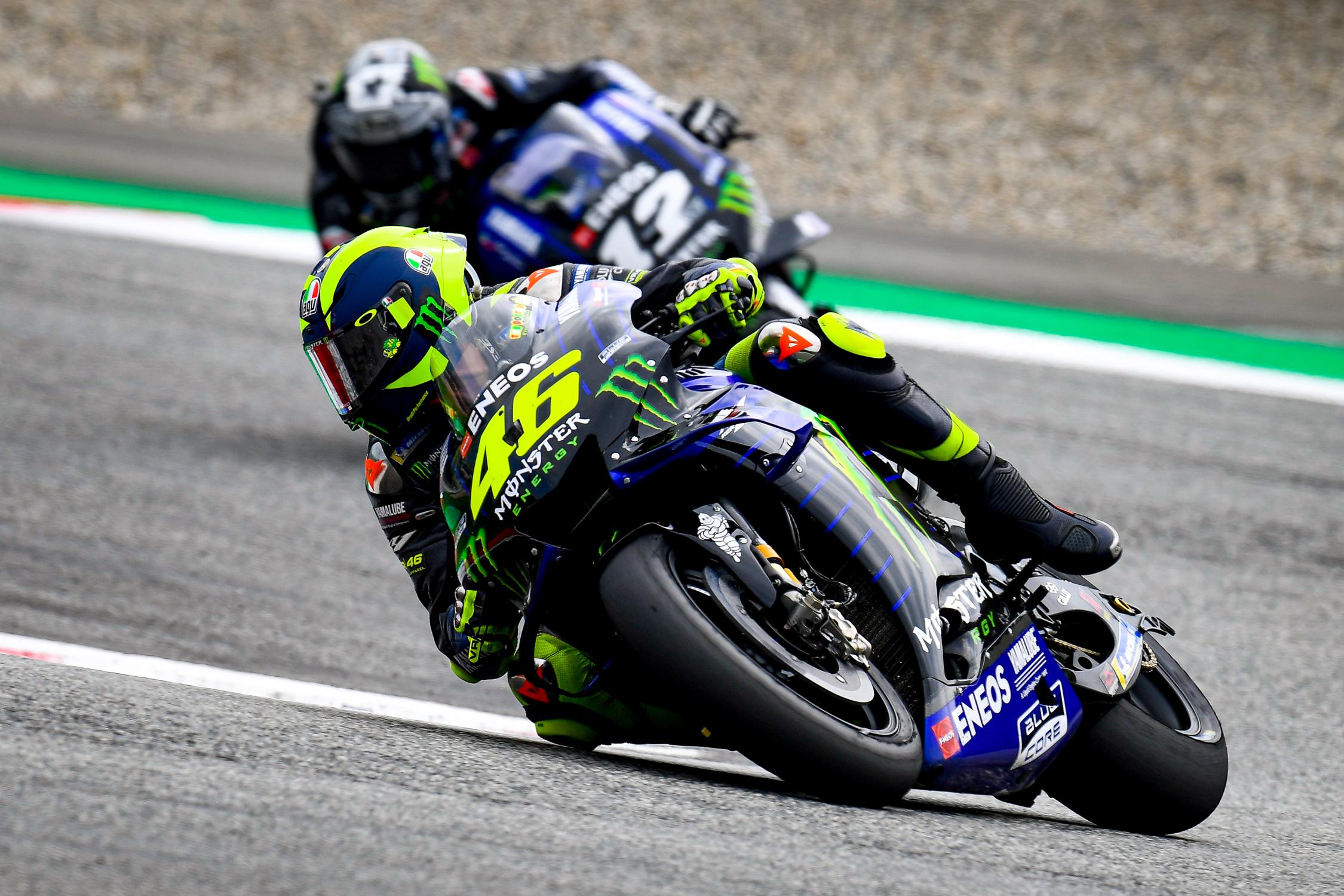 the Doctor beat his teammate, and that’s all that matters.

Marquez didn’t lose the race at the last corner, as every dickhead in the world seems to think. He lost it on the exit of the previous corner.

He had no grip at all coming out of the second last corner, allowing Dovi to push up the inside with his superior grip and take the inside line into the last turn. All Dovi had to do was make sure he went right out to the ripple strip on exit and the only option left to Marquez was to try and cut back inside and out-power the Ducati to the line.

Marc barely tried to fight. It was futile. Besides, he was happy with 2nd, given the circumstances. And he knew it was probably the best he could hope for. He’d already known that for 15 minutes. Didn’t stop him from trying though, and if the rear Michelin had hung on like he’d hoped on the exit of the second last corner he would have speared straight across to an early apex on the last corner and tied Dovi in knots.

But they both knew that wasn’t going to happen. Kudos for having a crack though, and kudos to Dovi for finally bringing a Howitzer to a knife fight and having the balls to leave it to the last turn.

Don’t believe me? Watch the replay, see how hard Marquez tried to hit the gas out of the 2nd last turn, how much the rear lit up, because he knew he had little chance. That’s where it was lost.

Next up is Silverstone, where it will rain, and Miller, Marquez, and Rins will fill the podium, in no particular order. That Suzuki is nice in the rain. Don’t be surprised if Rins wins.

By the way, keep an ear out for the new podcast I’ll be doing with my mate Boris and another secret guest. We’ll be online just as soon as we figure out how it works