And they saw that it was good.

Then they saw the only thing better than adding a small internal combustion engine to the bicycle was adding a large internal combustion engine to the bicycle. And they saw that it was indeed better, except that it was bloody uncomfortable and it didn’t handle corners and bumps and things very well. And they imagined how fast you could go and how much fun it would be if it did. And so some of them set to work on designing some machinery to fix this, and were not interrupted by random dinosaur attacks because they were all extinct.

The first type of motorcycle front suspension was the girder fork. It sported a pair of forks just like a bicycle, but hung them off the top triple-tree on four links so they could have a spring (and later a damper) controlling the movement. 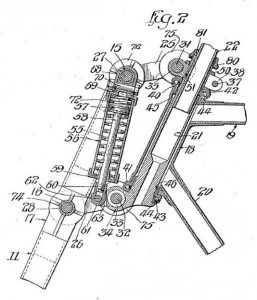 It was used for years. It was easy to manufacture, and could be engineered to provide reasonable performance. One of the last machines to use it was the 1950s superbike, the Vincent Black Shadow. Black Shadows were good for about 200km/h. The final models sported what Vincent called Girdraulic suspension, which was a girder fork with a hydraulic damper.

Earlier models had friction dampers, ie. a series of disks which could be tightened by a screw to increase the damping. The problem with this setup was they provided high initial friction which lessened as the wheel reached the end of its travel – the opposite to what is desirable. And the compression damping was pretty well equal to the rebound damping instead of being about 5 per cent of it, which is desirable.

One particular advantage with Vincent’s linkage design was that it was adjustable. Decreasing the trail and rake for use with a sidecar meant simply raising the front wheel off the ground, backing off the lower rear spindle nut, twisting the eccentrics which held the pivot through 180 degrees, and re-tightening the nut. 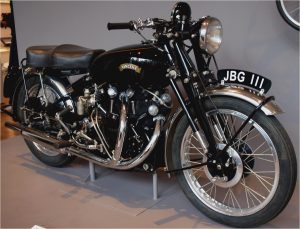 The girder fork, however, suffers from several problems. First (and it’s a problem shared by many motorcycle front suspensions), the wheel is at the end of a metre-long lever which is really good at twisting the steering head when you hit a bump while leaned over, and this isn’t good for stability.

You can engineer around this by bracing the steering head, but it adds weight, and adds it up high in the front of the motorcycle, raising the centre of gravity and making the motorcycle harder to turn.

The forks themselves bend too, and in order to fix this they must be made larger, and thus heavier. This extra weight is the wrong sort: it’s unsprung, and it adds to the inertia of the wheel and fork, slowing their response when they hit a bump. And once it is moving, the extra weight is harder to stop, which puts more stress on the springs and dampers and makes the wheel harder to control.

Despite this, the girder fork is used in a current motorcycle, the Confederate Wraith. 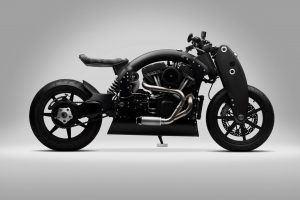 A close relative of the girder fork is the springer fork. It’s often used in choppers, probably for the visual effect of having the suspension out in the open.

It differs from the girder in that the suspension links are at the bottom of the fork. Long arms transfer suspension movement to the spring/damper units, which are mounted up in the triple tree like those in the girder front-end. But it suffers from the same engineering drawbacks as the girder front end. It has high unsprung weight, a long fork, short links and a variable wheelbase.

In 1918, when the motorcycle itself was only twenty or so years old, a gifted American designed and built an extraordinary motorcycle with a transmission, chassis and engine which were decades ahead of their time.

He called it the Ner-a-Car. Get it? Hilarious, huh? It had a 221cc two-stroke engine. It had an infinitely variable friction-drive transmission. It had a monocoque chassis. And it had hub-centre steering. 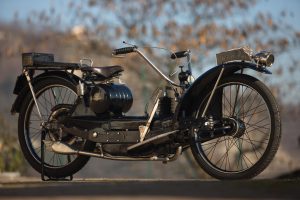 It was renowned for its stability. The little two-stroke engine sat low, with the cylinder head popping up between the rider’s feet. The fuel tank was under the seat. All the weight in the chassis was low. There was no rear suspension until the 1925 model, but a sprung swinging-arm supported the front wheel, and the steering mechanism was inside the front hub, operated by a linkage connected to the handlebars. There are still fifty or so in existence, and five of them are in Australia.

Carl Neracher was probably the first man to think outside the square and get away from the traditional fork. The swinging arm had plenty of attractions as a front suspension though. Its movement was easy to control, the weight was kept low, the suspension force was not transferred to the frame via a small steering head, there was no static friction interfering with the suspension action, and if the swinging arm was angled down slightly, there was a natural anti-dive built into the geometry. (This was probably not real relevant on the Ner-a-Car, which had no front brake, but a two-part rear brake: one half controlled by a handlebar lever and the other half controlled by a foot pedal.)

This separation of the braking, steering and suspension functions led others to build hub-centre steering suspensions, but not for some years.

In the late 1960s a British engineer called Jack diFazio started experimenting with hub-centre designs. His creations tended to have a large diameter hub which didn’t spin but did steer, and which was connected to the axle via a kingpin. A larger hub was mounted to the outside of this steering hub and spun on ball or roller bearings, and the wheel was laced to this larger hub. 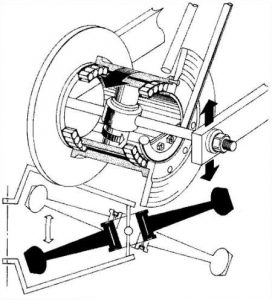 Mr diFazio’s custom front-ends became very popular in Britain and Europe. They weren’t pretty, but they were clever and they worked. The main disadvantages were a reduced steering lock and occasional failures of the heavily loaded kingpin, but many customers thought the advantages in roadholding and stability outweighed these. And while it didn’t look pretty, it looked trick.

Race developers were noting the advantages of the separation of braking, steering and suspension as well.

In the eighties Elf created a succession of Honda-engined GP bikes with centre-hub steering and Mead and Tomkinson used a very diFazio-like front-end on their endurance-racer Nessie. The Elf machine started competing in 1985, and in 1987 Ron Haslam rode it to 4th place in the World Championship. 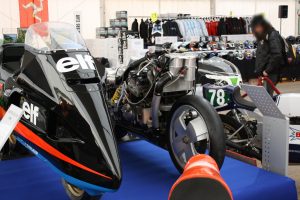 The first manufacturer to decide to incorporate hub-centre steering into a production motorcycle after the Ner-a-Car was Bimota. 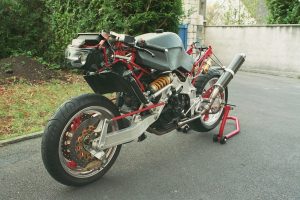 In 1991 they released the Tesi 1D, a hub-centre steered machine with a Ducat 851 motor. It never became popular because it’s a Bimota, and they’re too expensive to become popular. 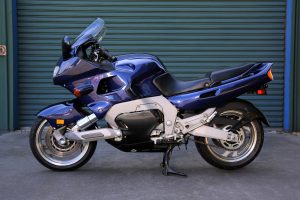 It was, for the time, a technological tour de force. It had electronic fuel injection, ABS brakes front and rear, a three-way catalytic converter and a de-tuned version of the FZR sportster’s 1002cc 5-valve watercooled engine. And it had what Yamaha called RADD front suspension. RADD stood for Rationally ADvanced Design.

An upright beam was mounted to a single sided swingarm at the bottom and a wishbone at the top. The bike was steered by rotating the beam with a telescopic steering linkage connected to the handlebars. The front wheel hub was offset, and there was a single large inboard brake disk with a six-piston caliper.

Buyers stayed away in droves, and Yamaha stopped making them in 1996.

By all accounts the GTS-1000 handled a treat and went like stink, but the trick technology translated into a price tag that not many wanted to pay. Kawasaki’s ZX-11 was $3,000 cheaper.

Personally, I’ve always thought the GTS1000 was sex on a stick. I’m not alone. Last year, Bike magazine called the 1994 Yamaha GTS1000 the coolest of rare motorcycles. “Scarce, stylish, yet capable and completely usable: that’s cool in our book.”

As at the time of writing, there are only three hub-centre steerers on the market. And they’re all Italian.

Bimota still make one – the Tesi 3D. The other two are the Vyrus 2D and 4D. 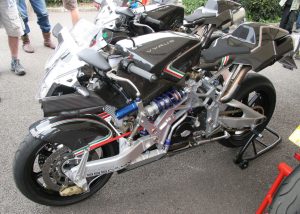 The interesting thing about hub-centre steering is that every motorcycle researched in writing this article had a reputation for being a sweet handler.

But every hub-centre steerer from the Ner-a-Car forward had a reputation for steering nicely.