HISTORY OF THE FRONT END – PART 2

It had water cooling, a lightweight duplex frame, and a low centre of gravity. It also had telescopic forks.

Its roadholding was pronounced superb. The forks had no damping, so you can imagine what the competition handled like.

In 1934, the Danish vacuum cleaner company Fisker & Nielsen (makers of the Nilfisk vacuum cleaner) decided they would build a motorcycle. They called it the Nimbus. It had an oil-damped telescopic fork up front, the first time such an item appeared on a motorcycle. Between 1934 and 1960, Fisker and Nielsen built 12,000 motorcycles. 4,000 of them are still running today. 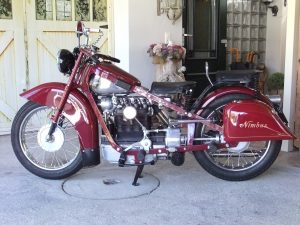 One model had a 20mm anti-tank cannon mounted on a sidecar frame. It’s wasn’t the sort of motorcycle that people took off you. 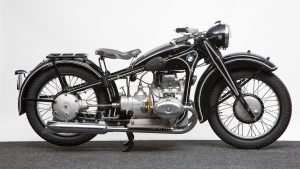 Telescopic forks dive under brakes, upsetting the stability of the motorcycle. The suspension is under stress at this time and not only does it lose most of its travel, but it loses sensitivity to bumps as the fork tubes bind and static friction takes over. The front wheel is held at the bottom of two long levers which have a large amount of mechanical advantage over the steering head, so the frame starts to twist. To minimize frame twist you have to brace the steering head, which makes the motorcycle top heavy. And while they’re not as bad as girders, the wheelbase changes as the suspension reacts to bumps or weight transfer.

But they’re cheap to make. And they look kind of cool — all sleek and self-contained, not like those girder forks with bits going everywhere. So the stylists love them. And you can get a fair bit of travel out of them without the wheelbase changing too much.

BMW were considered leaders in quality and reliability, and most of the rest of the world followed.

In 1955, BMW abandoned the telescopic fork for a few years. The rest of the world didn’t.

But, over the years, the rest of the world made a big effort to engineer around some of the telescopic fork’s shortcomings. The dive under brakes could be reduced by using progressive fork springs, so most forks ended up containing a pair. The forks could be pressurized with air, making the spring rate even more progressive.

In 1969, Honda introduced TRAC – Torque Reactive Antidive Control. The brake caliper pivoted on its mounting. When the brake was applied, it rotated around its pivot and pressed against a valve which cut oil flow and increased damping in the fork. 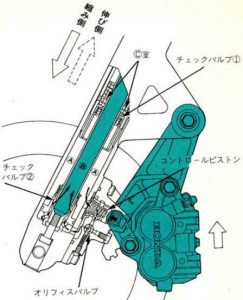 By the eighties, Kawasaki had AVDS – Automatic Variable Damping System. Hydraulic pressure from the brake hose was used to close damping valves under brakes. Yamaha and Suzuki had similar systems.

The problem with this approach was that increasing damping doesn’t prevent dive. It just slows it down. Road testers never seemed to rave about how heavy compression damping under brakes made the motorcycle better. And in fact, in the mid-Nineties, Yamaha put a feature on their motocrossers called BASS (Brake Actuated Suspension System) which reduced damping under brakes in order to combat wheel-hop.

Motorcycles got faster and heavier, and the forks got thicker to control the flex inherent in them. Designers started bracing the fork above the front wheel. Steering heads got better braced. Superbikes used to have 19-inch front wheels. Designers went as low as 16 inches, allowing them to reduce the length of the fork and its ability to feed stresses into the frame.

The next big advance in telescopic forks came in the Eighties. The British company Saxon-Motodd connected the above-wheel fork brace to the front of a pivoted wishbone via a ball joint, and connected a spring-damper unit to the wishbone. 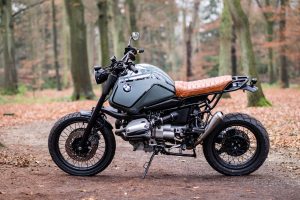 This design fixed several of the conventional telescopic fork’s shortcomings. For a start, stresses were fed into the frame at widely separated points instead of into an over-stressed steering-head. There was less variation in wheelbase as the suspension cycled. Unsprung weight was reduced. The system had natural anti-dive.

It also kind of looked like a conventional front-end at first glance, so it wasn’t going to upset the conservatives too much.

BMW incorporated this into their 1994 model range and called it “Telelever”. It worked well. 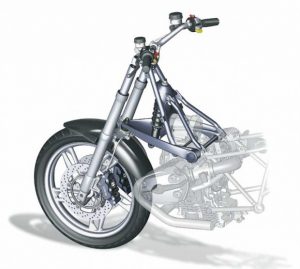 Surprisingly, no other manufacturers have seen fit to copy this design. Not only that, but BMW have retained telescopic forks for their competition motorcycles. Despite their innate shortcomings, telescopic forks have had the world’s best design and engineering brains working on them for nearly a hundred years, and a well designed and manufactured telescopic fork works pretty damn well.

Indian was one of the first motorcycle manufacturers in the world. They had to grapple with the problem of providing suspension to their motorcycles early in the piece, and they came up with the trailing link fork.

Indian persevered with this idea for decades.

A 2006 US postage stamp celebrates the 1940 Indian Four, a luxury superbike with a pair of forks terminating in pivots for the two short links which hold the front wheel. These pivots extend backwards from the fork to the wheel mounting, but also forwards from the fork to join with a U-shaped arm which connects to a leaf-spring jutting out from the bottom of the steering head.

Earlier versions of Indian’s front-end had spawned a notable imitator.

Under the terms of the Versailles Treaty at the end of World War I, Germany was forced to abandon its air force. This was bad news for the aircraft engine manufacturer Bayerische Motoren Werke AG, and they desperately looked for alternative products to manufacture. They tried agricultural implements, furniture, and toolboxes; and then decided to turn their engine building skills to motorcycles. Their first motorcycle, the Flink, went on the market in 1920.

It was not a success.

In 1921, they put their second model, the Helios, to market. It didn’t sell well, either.

These two models were placeholders while BMW’s chief engineer Max Friz got his piéce de résistance ready for market.

The 1923 R32 had a 494cc flat-twin two-cylinder side-valve ‘boxer’ engine, an exposed driveshaft final drive, and a three-speed transmission. It had no front brake, but it had a big disk on the rear wheel, and pressing the brake pedal pushed wooden blocks against it. The chassis had a rigid tubular-frame with sprung seat, and it had trailing-link cantilever suspension, just like the big company in America made.

BMW manufactured the R32 for three years, selling over 1,000 a year on the average; no mean feat in the hyper-inflated mess that was the economy of post-war Germany’s Weimar Republic.

Trailing link forks seemed to die with Indian, but they re-appeared recently on a power cruiser manufactured by, surprisingly, Honda.

The Honda Rune has a large pair of forks which look as though they telescope but, in fact, don’t. The forks terminate in pivots for the trailing arms, at the end of which is the front axle. Halfway along the trailing arms, they are connected to a U-shaped arm which conveys movement to the suspension – a pair of shock/spring assemblies mounted up near the steering head. 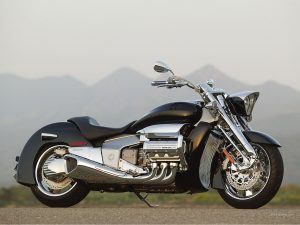 It separates suspension and braking forces, which many believe is a Good Thing.

The other way of adding suspension to the lower end of a set of forks was to let the wheel lead, rather than trail, the fork. 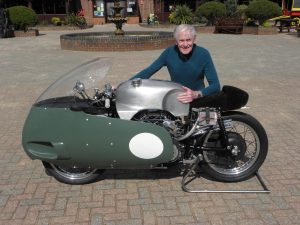 The Guzzi 500 V8 never went for long enough for someone to complain about its handling. It had the usual limited travel of leading link forks, but it tended to race on nice smooth tracks, so it didn’t matter a lot.

A few years later, one of the biggest selling motorcycles of all time sported a leading link setup, too: the Honda 50 step-through. Many peoples’ first motorcycle had leading link forks and was a Honda as well: the 305cc C77 (the engine was used as a template by Laverda to build their first 750 twin).

The trouble with leading link (and indeed trailing link) is that the links are independent. Look at the picture of the Guzzi. If the springs are slightly mismatched, the front wheel will twist during suspension travel and go out of alignment to the rear wheel.

This problem was recognised many years earlier, and solved by an English engineer called Ernest Earles. His solution was to make a rigid swingarm to hold the front wheel. In order to make it rigid, it had to be pivoted behind the wheel, so the fork bent back at a severe angle. 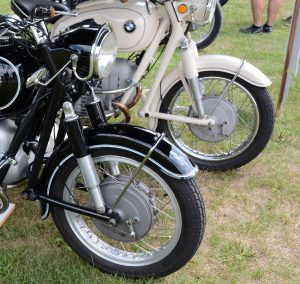 BMW caught on to Earles’s design, abandoned the engineering abomination of telescopic forks, and started fitting Earles forks to the front of their machines in 1955.

While heavy in terms of the reciprocating mass of the entire front-end, the Earles fork was reasonably rigid and the unsprung weight was reasonably low. It still had a large front-end to twist a small steering head, but it also had natural anti-dive built into the geometry. The swingarm was pointed slightly down – under brakes the motorcycle would try to go over the top of it and it would extend the suspension rather than compressing it. This was good for BMW riders, as their engines stuck out the side a long way, and would hit the ground if you applied the brakes while leaned over.

Earles’s design had the other advantage that suspension travel could be quite long with minimal variation in wheelbase. 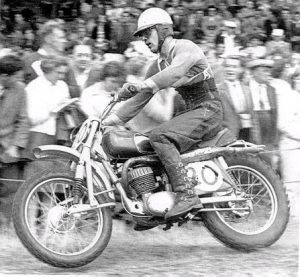 BMW discontinued Earles forks after 1970, as fashion dictated the return of the telescopic fork. The last blast for leading link forks was during the 1970s, and was mostly on dirt bikes. There was a small Spanish bike called El Gato, a few Greeves’, a Hagglund military motorcycle, a CZ 125. A Zundapp, from memory, as well.

And they just went out of fashion. Telescopic forks were easier to style, and while the brakes got in the way of steering and suspension, teles had been around since the 1930s. Over the years some pretty good engineers had applied themselves to the telescopic fork’s shortcomings. And a well-designed telescopic fork made to close tolerances, mounted in a strong frame and looked after, could provide formidable performance.

The next big development in suspension wouldn’t come until the late 1970s. And it wouldn’t be picked up by a big manufacturer for another thirty years.